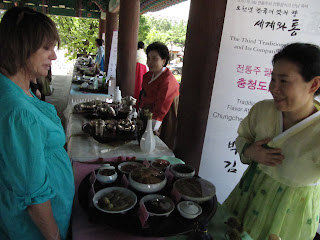 Saturday I made my way to Namsan Hanok Village near Chungmuro for a Korean Traditional Food and Drink Festival. Our first stop was a display of foods from all over the peninsula. Women, dressed in Hanbok (traditional Korean dress), presented foods that they had hand made themselves. It was especially interesting because my friend's mom was with us and had a much more fresh and excited outlook on the displays. Once you've been here for a while things like this don't seem so exciting, but to someone fresh off the boat (or plane as the case may be) even the simplest things are quite exciting, and forces us weather-worn folks to take a second look at things. The food, when examined closely, was quite intricately prepared and displayed, down to the smallest detail. 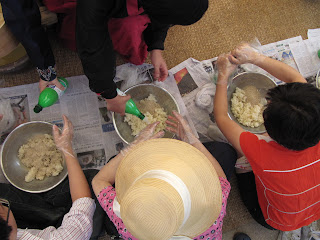 We wandered around some tents set up outside with various displays and finally came across a makkoli making event. They were giving out samples of a grape flavored makkoli and a pumpkin flavored makkoli. I much preferred the grape one! We considered making some makkoli (we've tried twice before with a bad track record) but in the end we didn't want to wait and we wound up wandering away from the makkoli making tent. 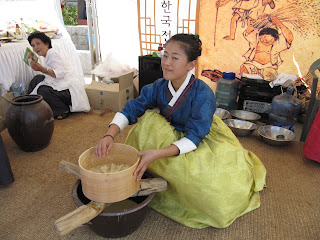 Woman in hanbok working with the pumpkin makkoli 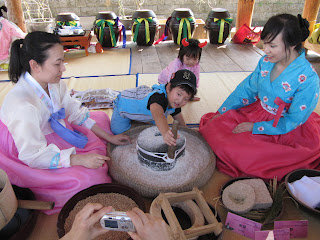 We wandered around a bit to some other tents and saw a rice mill and some soju distilling. 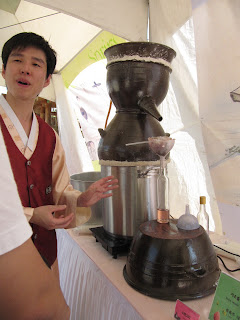 We wandered a little more and found a make-your-own-ddeok table. We were given gloves, a ball of ddeok (rice cake thingy) and some red bean globs. We mushed the rice ball around in our hands, hollowed it out, put the red bean inside, rolled it back together, and the stamped it with a pretty design... then ate it :-) 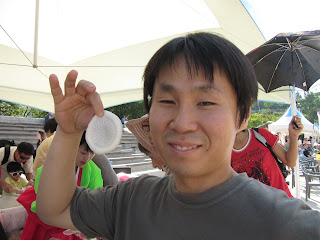 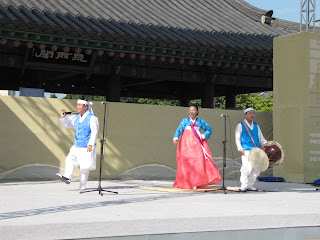 We wandered past a stage with various performers as well... but it was hot and only mildly interesting to us... 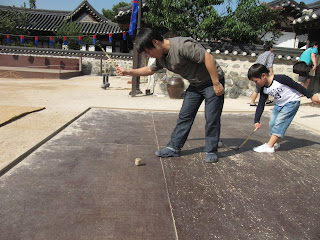 From there, we made our way into the actual "village". It's been more than 2 years since I last went there, but I distinctly recall enjoying the traditional Korean games. This game above is called 팽이 (pengi). It's basically a top which you try to keep spinning by whipping it. My boyfriend could kind of do it, but that kid behind him was a champ. 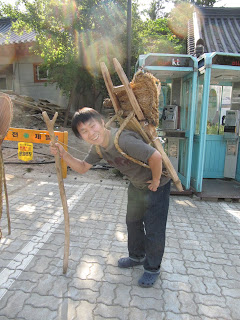 As we were leaving, we found these lying around and decided to give them a try... 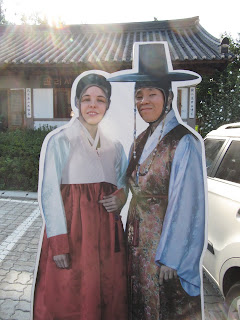 And, of course, the ubiquitous face cut-outs.
Posted by 조안나 at 7:51 AM