Hallasan (한라산) is the highest peak in Korea, reaching a height of 1,950 m (6,398 ft) above sea level. It is an extinct volcano, and it's last eruption was around the year 1007. Being a shield volcano ,which tends to have less violent, more flowing eruptions, as opposed to the more explosive types, it is a quite gradual hike up until you reach the very top of the mountain. There are several paths to hike on Hallasan, but only two go to the top; Seongpanak Trail (성판악) - 9.6 km, a very gradual, easy for the most out of shape person to do, and Gwaneumsa Trail (관음사) - 8.7 km which is a more strenuous hike with stairs nearly the whole way.

We decided to go up the easy trail, Seongpanak, and go down the hard trail, Gwaneumsa. It seemed like a good idea at the time but as my legs finally just stopped hurting today, Tuesday, six days later, maybe it actually wasn't the best idea.

We took the bus to the base of the Seongpanak trail which was quite convenient for us. We knew we'd be hiking all day and coming down a different trail, so we decided to put off renting a car until the next day. The bus to Seongpanak runs about every 1/2 hour or so from Jeju City bus terminal and was 1,500 won for the 30 minute bus ride. It's easy to know when to get off, because everyone wearing hiking gear will get off at the same place.

We caught the bus at 6:30 and started our hike just after 7:00 am. We weren't in the best of shape so we wanted to be sure we had enough time to get up and down with plenty of break times. They are a little strict about assenting the mountain. You should be to the midway shelter on either path before 12:30 or else you shouldn't continue on to the top. There didn't appear to be anyone checking at the shelter, but I would imagine that rangers would probably start turning people away after a certain time, so make sure you get an early enough start. For us, starting at 7:00 am, we got to the shelter around 10:00 am. You should also make sure you make it to the peak by 2:00 pm, because that is the time they have posted as the last time for assenting. If you're later, someone could turn you away before you get your sight of Baengnokdam. We arrived at about 12:30 pm.

The Seongpanak trail started off almost too easily. We climbed for two hours before we started to see any serious uphill climbing. It felt more like a stroll through the woods on a very well constructed trail. 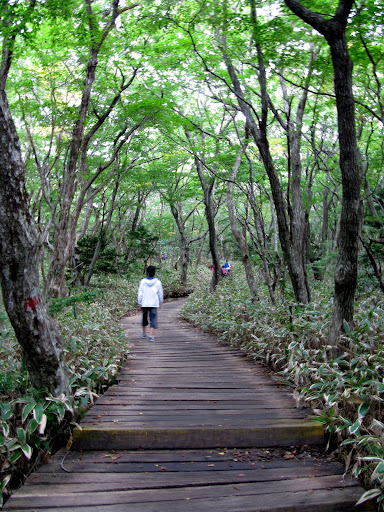 After three hours of hiking, we reached the shelter where we had a snack of cup ramen which we bought here, plus some canned vegetable tuna, kimbap, and bread which we brought with us. There are no trash cans anywhere on the mountain, so be prepared to carry out what you bring in or buy here. 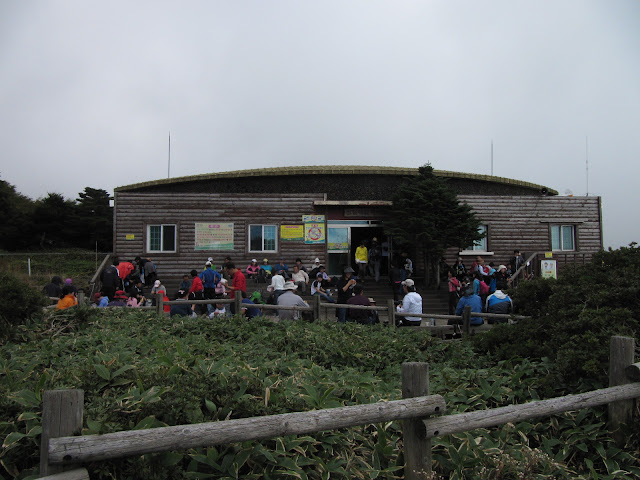 The shelter had a few things for purchase, but on the safe side, it'd be better to bring up your own things. 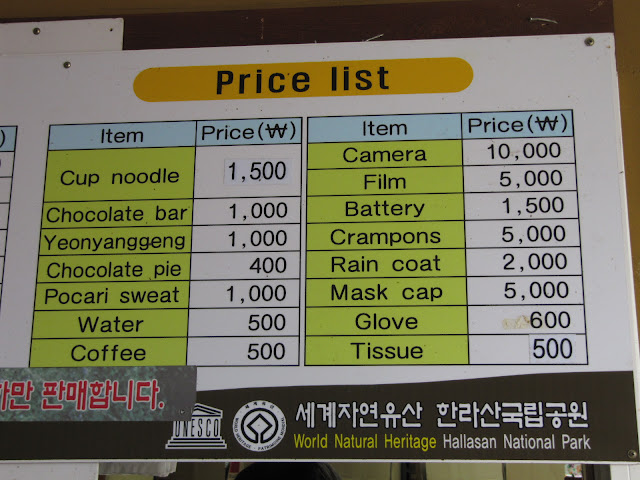 After leaving the shelter, the climbing got a little more intense. We made our way slowly for another hour when we got this sight, we could finally see the top! 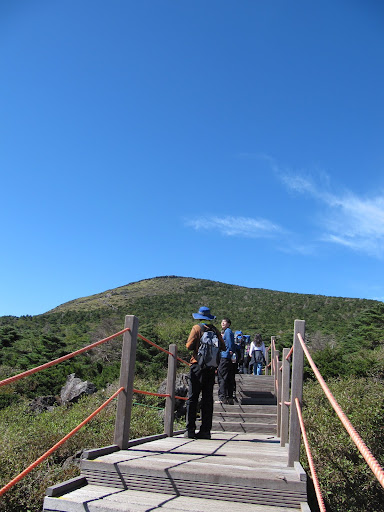 From here the incline got to be a little harder, but we took so many photo breaks we hardly felt it. 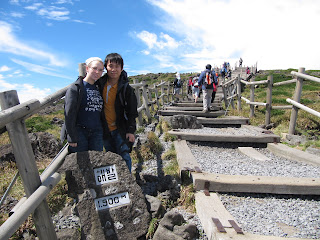 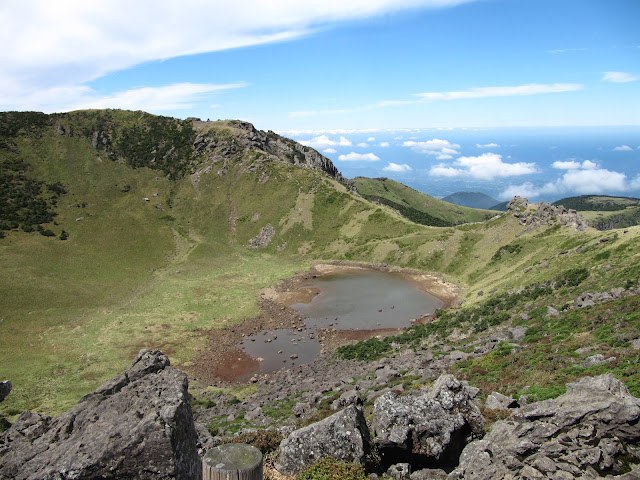 When you get to the top, you'll hopefully have a view of Baengnokdam (백록담), the lake in the volcano's crater. I was expecting something a little bigger than this puddle, but it's quite famous and people will be quite impressed if you tell them made it up to Baengnokdam. I used the word "hopefully" because I hear that, while the weather while we went was very clear, the top of the mountain spends most of it's days under a cloud. Try to plan your hike for the clearest day possible for the best views! We really lucked out! 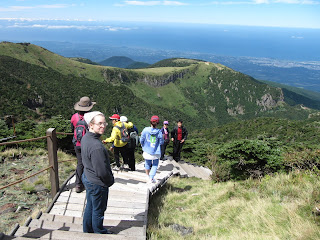 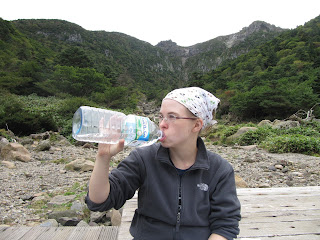 At first, the going down Gwaneumsa was nice, all downhill, but soon all that downhill action started to take it's toll. Achy legs slowed us down and forced us to take many stops. Here I'm taking a break with some SamDaSu, water from Jeju that I often drink in Seoul. I'm at the spot where a shelter used to stand, until it was swept away by a landslide caused by a hurricane several years ago. There's a new shelter about 15 minutes hike from here. 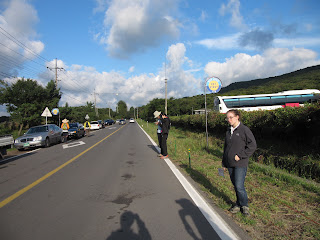 Finally, 4.5 hours of constant downhill action, we made it to the bottom. Every muscle in my body was aching and all I wanted to do was sleep. But, we had to figure out a way back to Jeju city from here. We had read that there was no bus here, but upon inquiring, we found that one was coming 10 minutes later. What luck! We found out later that there's only two buses a day that stop here and people were surprised at our luck. Otherwise, it's a 20,000 won taxi back to Jeju City.

If you have any more questions about Hallasan, please feel free to e-mail me. I hope everyone can have an opportunity to climb this mountian. Don't be daunted by the fact that it's the tallest mountain in Korea. It's easily hike-able in one day. For a time reference, I started at 7:00am and got to the bottom around 4:00pm. We took lots of food, water and photo breaks so it could certainly be done in less time if you're in better shape than us.
Posted by 조안나 at 10:55 PM