I've realized that this coming week is jam packed with activities in Seoul. Here is a list of what I've found so far, if you know of more, leave a comment.

9/27-10/1 Namsangol Hanok Village, Seoul Palaces and Joseon Royal Tombs- Free admission if you wear a hanbok (Namsangol is free anyway). It seems as though there will be activities, at most or all these places for Chuseok, but I can't find a schedule of events. http://english.visitkorea.or.kr/enu/SI/SI_EN_3_6.jsp?cid=811650&fb_source=message (see bottom of page for event info)
9/27-10/4 Tourism Information Center: Visitors may stop by the TIC (Tourisim Information Center) any time without prior reservations to play folk games or try on hanbok (traditional clothes) for free. - http://www.korea4expats.com/events-in-korea-TIC---Chuseok-Folk-Games-Event-27-Sept-4-Oct-2012-Downtown-Seoul-6712.html
10/2-10/3 Seoul Drum Festival: http://www.seouldrum.go.kr/index_e.html
10/1-10/7 Hi Seoul Festival: This year's theme is "Gestures that set the city in motion". Always a good time. -http://english.hiseoulfest.org/2012/html/main/main.asp
10/3 Korea-Japan festival: http://english.visitkorea.or.kr/enu/SI/SI_EN_3_2_2.jsp?cate=&area=1&dateStart=09-26-2012&startDate=20120926&dateEnd=&endDate=&keyword=&category=&areaCode=1&gotoPage=2&stype=1&cid=1079161&out_service=
10/6 International Fireworks Festival: Unless you actually live within view of this one, I'd stay away. http://www.hanwhapyro.com/200608/intro/intro_2012.jsp

If I had to pick two events to check out here, it would definitely be the Hi Seoul Festival and Namsangol Hanok Village for Chuseok, but I am hoping to catch a few of these events if possible!

Here are some past blog entries about these events: 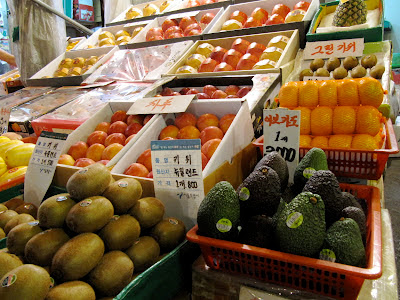 Since moving, I've gotten the chance to find some new places to shop around me. We have been thinking about home brewing some hard apple cider (we're becoming quite the brewery in our house nowadays) and so on our way home from Cheongnyangni on Sunday night we swung by the Cheongnyangni fruit market to see if we could find any apples for cheap. 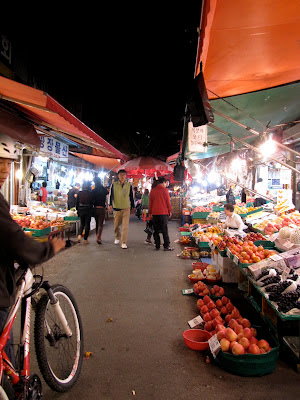 The market is huge, and although it seems to specialize in fruit, there are other things for sale as well. We first found one seller selling about 6 apples for 2,000 won and we though that was a pretty good price and picked some up. But, we realized that 6 apples was not going to be nearly enough so we kept wondering. 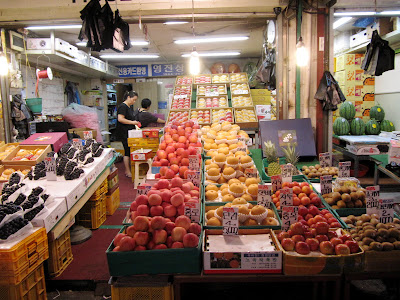 We turned down an alley trying to find a less crowded street to walk since we had our bikes with us, and we found this seller in the photo below. Those  things on the ground were 6 bowls of apples that he was trying to get rid of at the end of the night for 8,000 won total. Some of them were a bit bruised and old, but since it is for cider, not for eating, we figured we'd take advantage of the super cheap price and we bought them all. So, in total we got about 30 or so apples (and one random pear that got mixed in) for 10,000 won. We did pretty well I'd say. 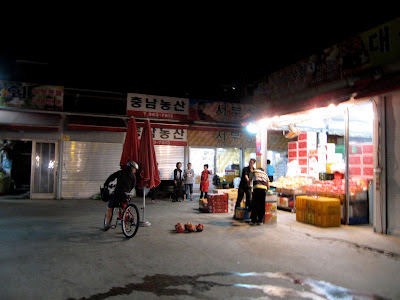 More on cider brewing later... but here is a preview.... 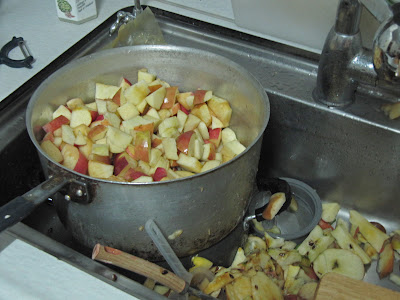 The Food Festival of the Royal Court and Aristocrats 2012 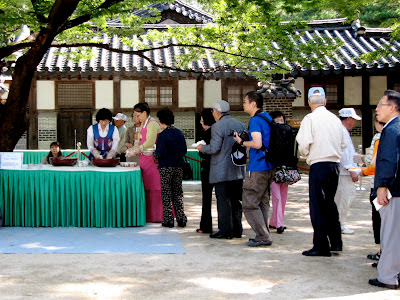 The Royal Court and Aristocrat Food Festival (궁중과 사대부가의 전통음식축제) is being held today 9/25 and tomorrow 9/26. I headed down to the festival grounds at Uihyeongung, a small palace in the Jongno area, to check out the celebrations today. 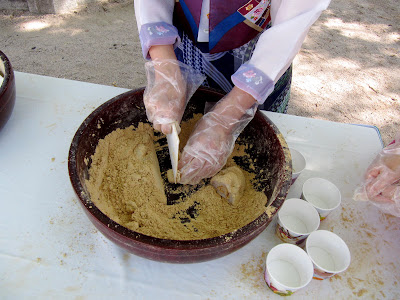 I first arrived around 10:30 am and things were starting to pick up. A lot of school groups and seniors were around trying the various activities and checking out the food on display. My first stop was to try the 인절미 (injeolmi), which is a high quality form of ddeok (rice cake). Children were taking turns pounding the ddeok while this woman was serving the ddeok. If you've haven't tried ddeok yet, it's a kind of sticky rice ball with a consistency similar to dough. 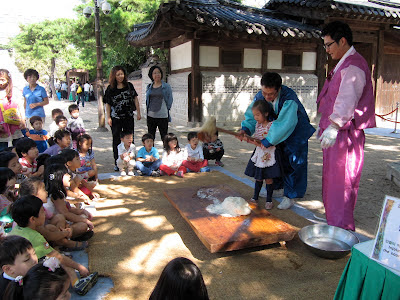 Children pounding the ddeok with a heavy wooden hammer 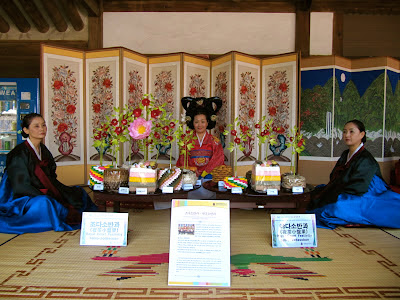 After walking over to the other side of the palace I found some impressive food tables on display. In the photo above, you can see 조다소반과 and 야다소반과. These are the king's morning and evening snacks and tea. Equally impressive as the food are the actresses here who sat still all day for all the visitors taking photos. Below is part of another display of King Yeonjo's birthday meal. Records of this king, the longest reigning king of the Joseon dynasty, still exist, and even details from his birthday meal in 1765 can still be recreated from the detailed records. 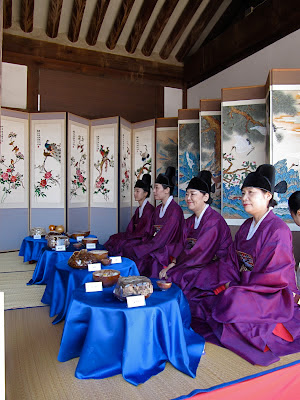 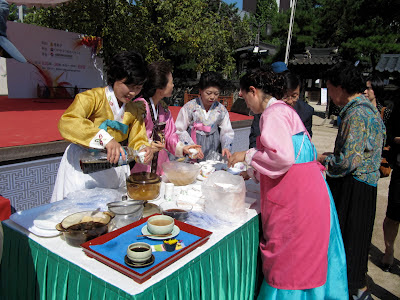 A variety of traditional drinks were being offered, but I decided not to get any because the line to get a glass or two of this stuff nearly reached across to the other side of the festival. 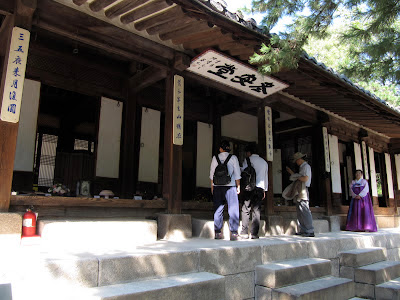 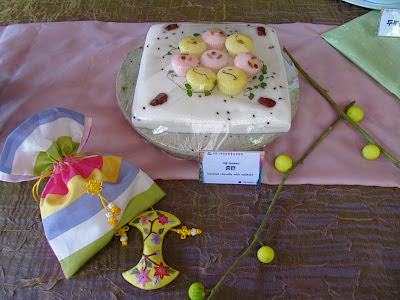 For those interested in traditional Korean cuisine, the food and drink displays were quite impressive. But, for me, I prefer eating food to looking at food, so I moved on to the more interactive parts of the festival. 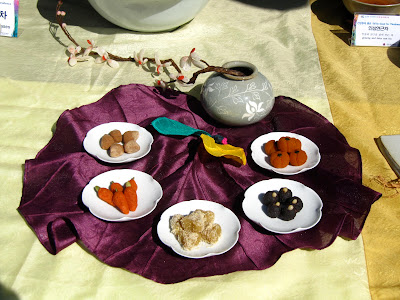 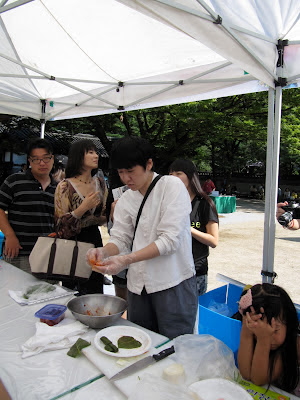 I left the festival for a few hours and came back around 2 pm. I saw them setting up for some kind of kimchi making so I hovered about until they were ready to begin. They explained to us that this is 깻잎김치 (Sesame leaf kimchi). This is not a very common form of kimchi and so everyone was very curious about how to make it. 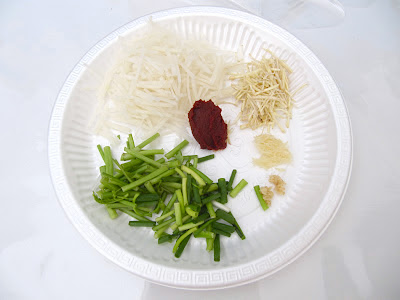 To make  깻잎김치 (kkenip kimchi), you must first take your sesame leaves and soak them in salt water for 30 minutes. Then you must add the ingredients above. They are (from top left going clockwise): radish (무), chestnut (밤), garlic (마늘), ginger (생강), spring onions (파), watercress (미나리) and for a sauce, gochujang mixed with anchovy powder (고추장과 멸치가루). 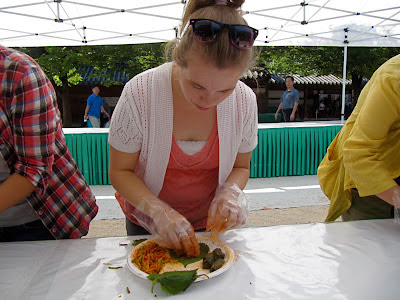 Then you need to mix all the ingredients up until the gochujang is evenly spread and there is no clumps. Then place a small amount of the mixture into the sesame leaf and roll it up, folding in the sides so that nothing falls out. Finally, take it home and eat it for dinner! This does not have to ferment before being eaten! 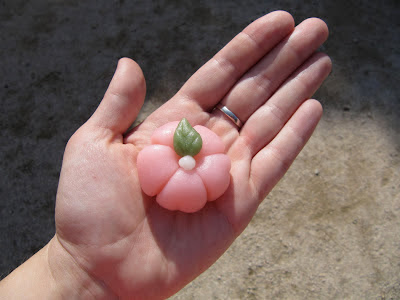 I was quite satisfied with my kimchi and I walked away from the experience table to relax for a few minutes. Suddenly I saw a huge crowd of people flock to the table again. I figured they were making another round of sesame leaf kimchi, but when I went over to check I found that it was time for making ddeok (떡). Not just any ddeok, but very decorative ddeok of the aristocrats. While snapping some photos one of the helper women handed me this beautiful piece of ddeok in the shape of a flower so I decided I had to give it a try. 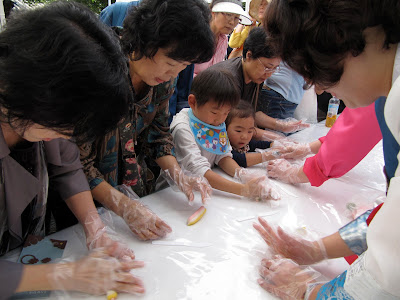 The ddeok making station I found myself at was making another style of ddeok, with yellow, green and pink swirls. These looked easy to make, but it turned out to be more difficult than it looked... 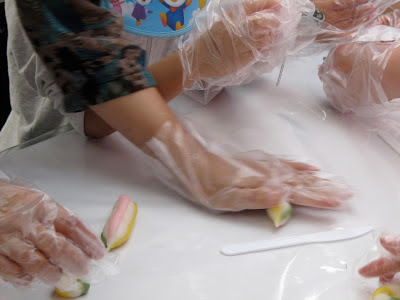 First we were given a big piece of white ddeok to roll into a cylinder shape. Then we rolled thin pink, yellow and green peices of ddeok and attached them to the sides by rolling them together. Then we cut them using the side of our hand and then pressed them into round shapes. Other folk's ddeok looked nice, but mine was a little sad looking. 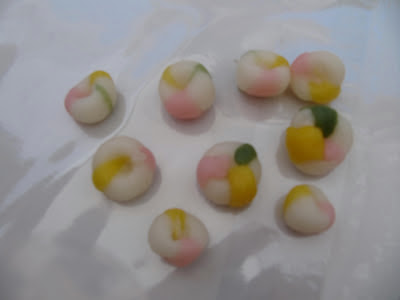 The festival will continue until tomorrow 9/26, so if you have time from 10-6 pm tomorrow, make your way down and experience some of Korea's traditional food! 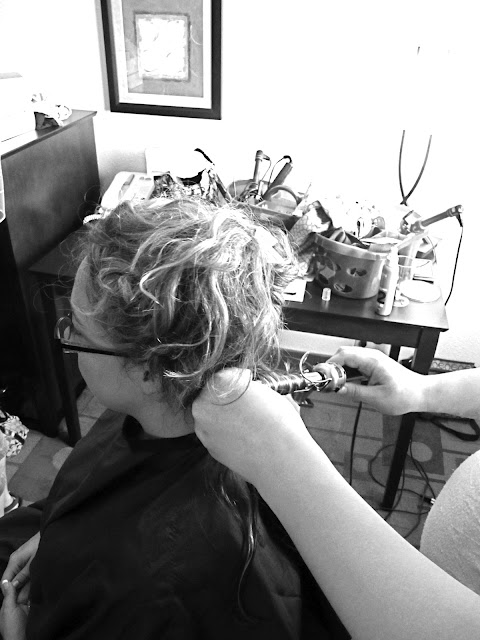 Weddings are stressful events to be sure,  and after being part of two weddings (well, being in one and planning the shower for another) I have decided one thing. Weddings are perhaps worth it mostly for the photos. Taking the photos and posing for the photos and editing the photos and getting the final photos. While I probably should have been doing more important maid-of-honor duties, I decided that I would be the unofficial photographer for the day. It was the one skill I could lend to the bride since I'm not good at stuff like make-up and dresses and shoes. 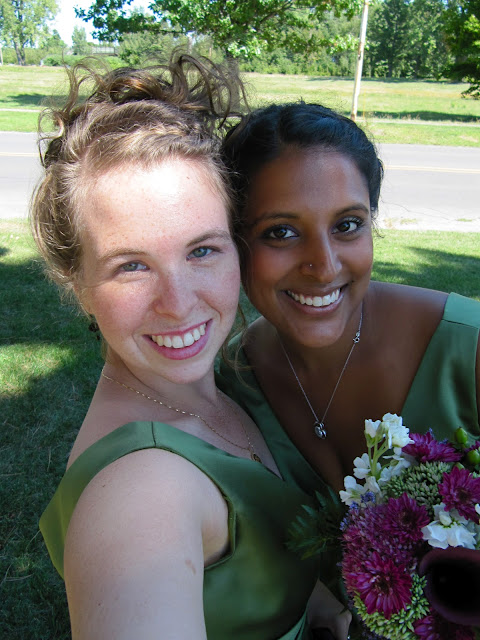 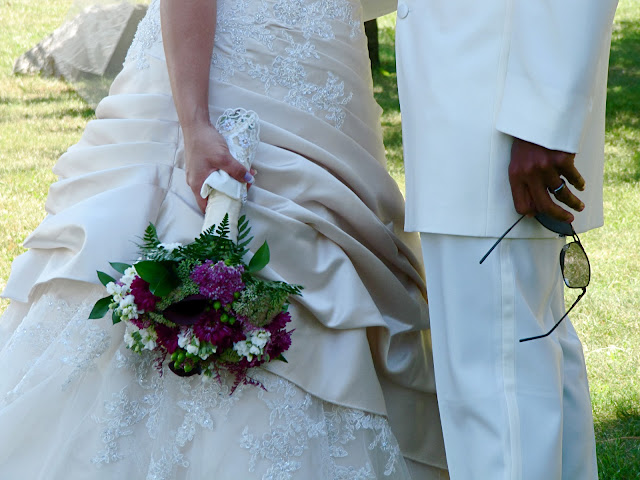 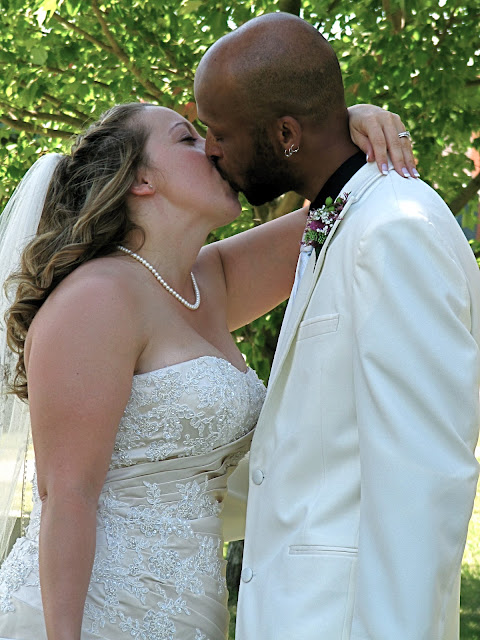 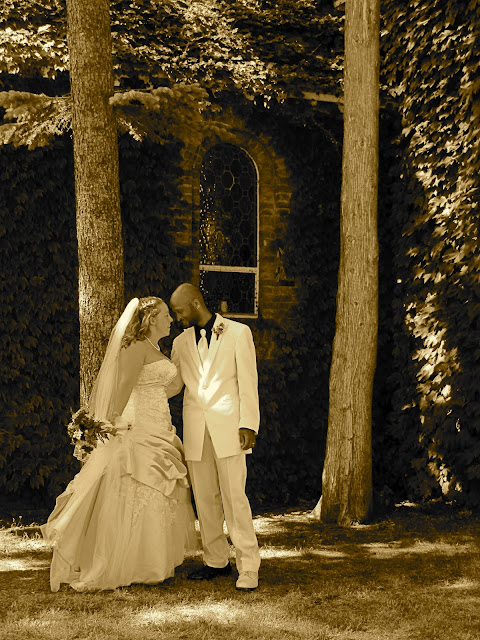 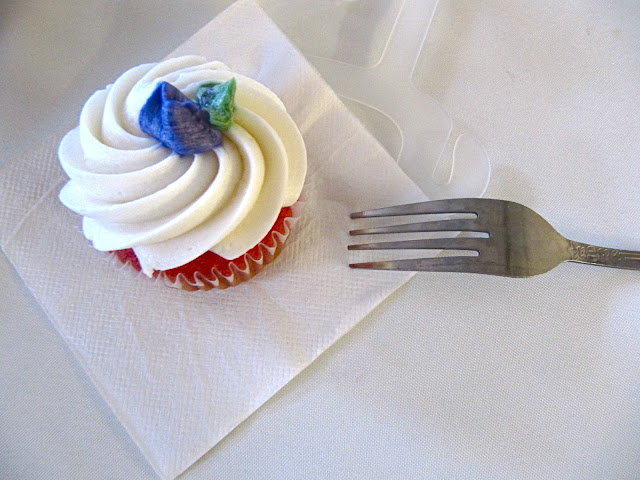 I highly recommend cupcakes instead of a real cake for your next wedding. It's cheaper and when people aren't hungry for cake after their big meal, they're much more likely to snag one later while they're dancing and working up an appetite.
Posted by 조안나 at 11:26 PM 2 comments

I arrived back in Korea Tuesday night. Went right back to work on Wednesday morning. I hope to get some new posts up soon, but for now the jetlag is too strong to think about exploring and taking photos. You can definately expect some posts about making makkoli in the next few weeks because the boyfriend has now deemed our house a "winery" and has started brewing makkoli and fruit wines. Soon we'll start with beer, too, I brought $90 worth of beer making supplies from the US with me. I still have a few posts I hope to write about America... you'll probably see those before any posts about Korea come up. Expect light posting for the next few months to a year because I'm still working full time plus taking an online class in curriculm design, plus working on another 6 month long project as well. -_-. No rest for the weary.
Until then.... 조안나 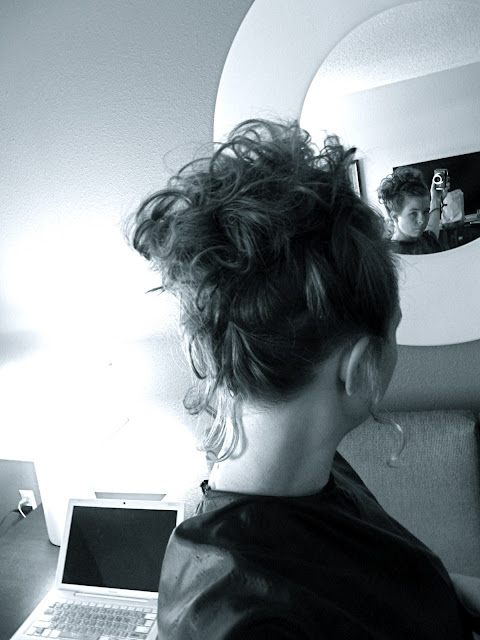 Self-portrait I took while getting ready for a wedding on Saturday in Plattsburgh, NY
Posted by 조안나 at 6:25 AM 3 comments