I'm pretty sure that Indian food is the best food in the world. I can't think of any cuisine which has quite as many flavors or diversity as Indian food. While I was in India, I spent most of my time in the Tibetan community, which meant getting Indian food was a bit of a production, however, I tried my best to get Indian food at least once a week while working at the monastery. 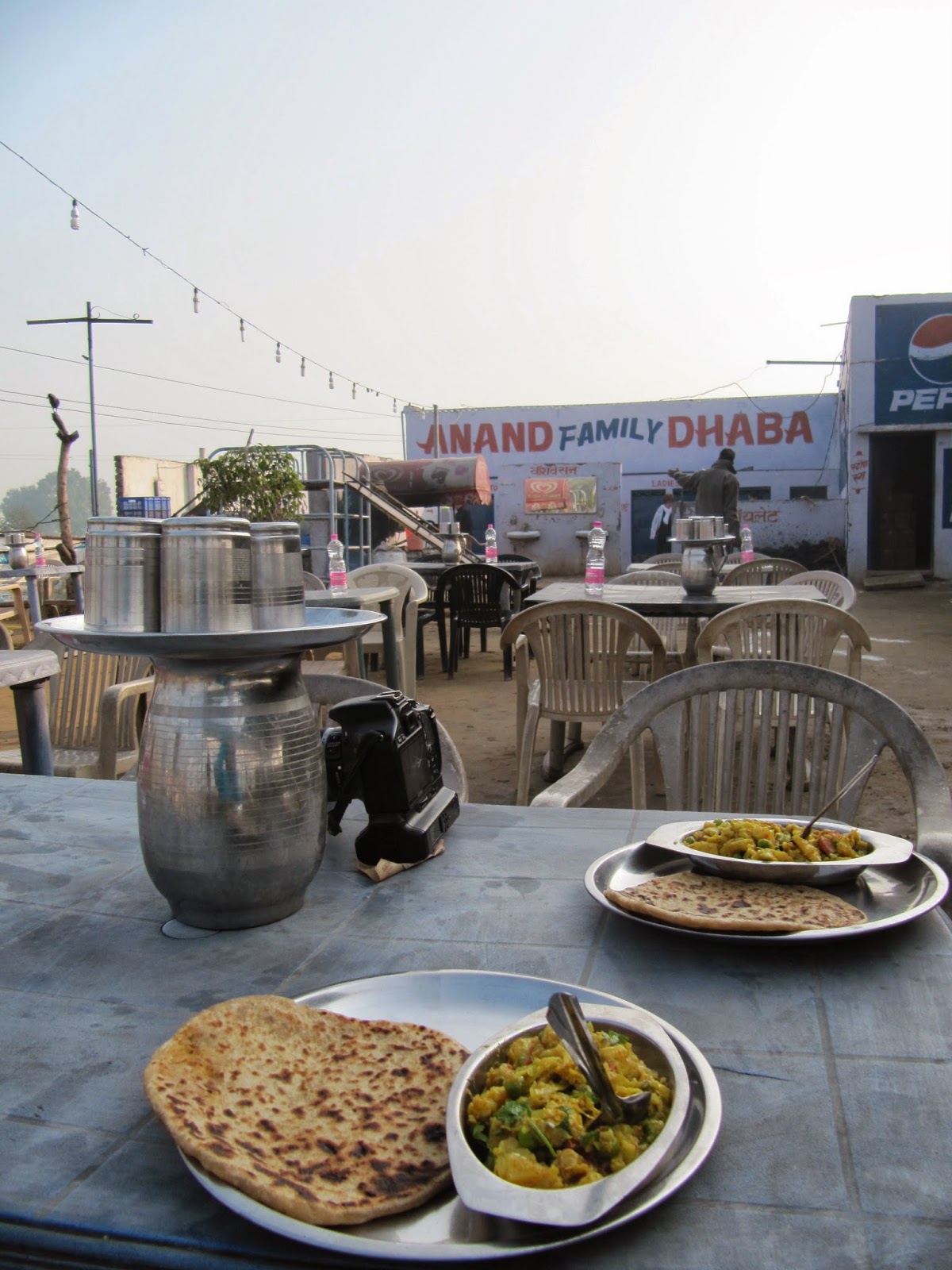 This was one of my first meals in India. This was a roadside Dhaba (small restaurant) on the way to Agra. We were tempted to get this 'veg curry' because of the dirt cheap price of 20 rupees or something, however the bread was filled with something delicious which made one piece of bread about 100 rupees. So, not a dirt cheap meal, but still delicious and amazing. And made me more conscious of bread prices in future meals. 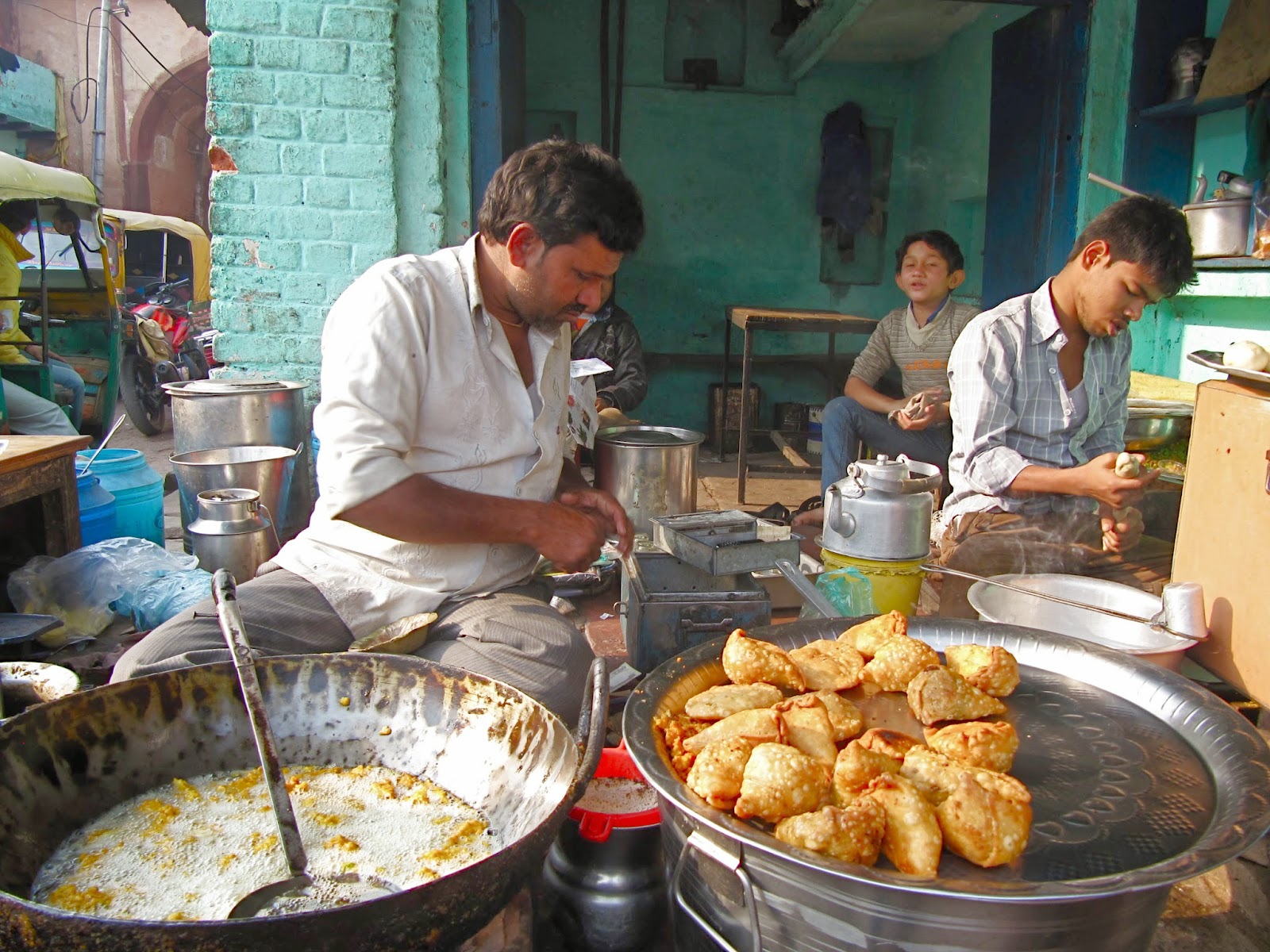 One of the most ubiquitous street foods in India are samosas. Who can resist deep fried amazingness? 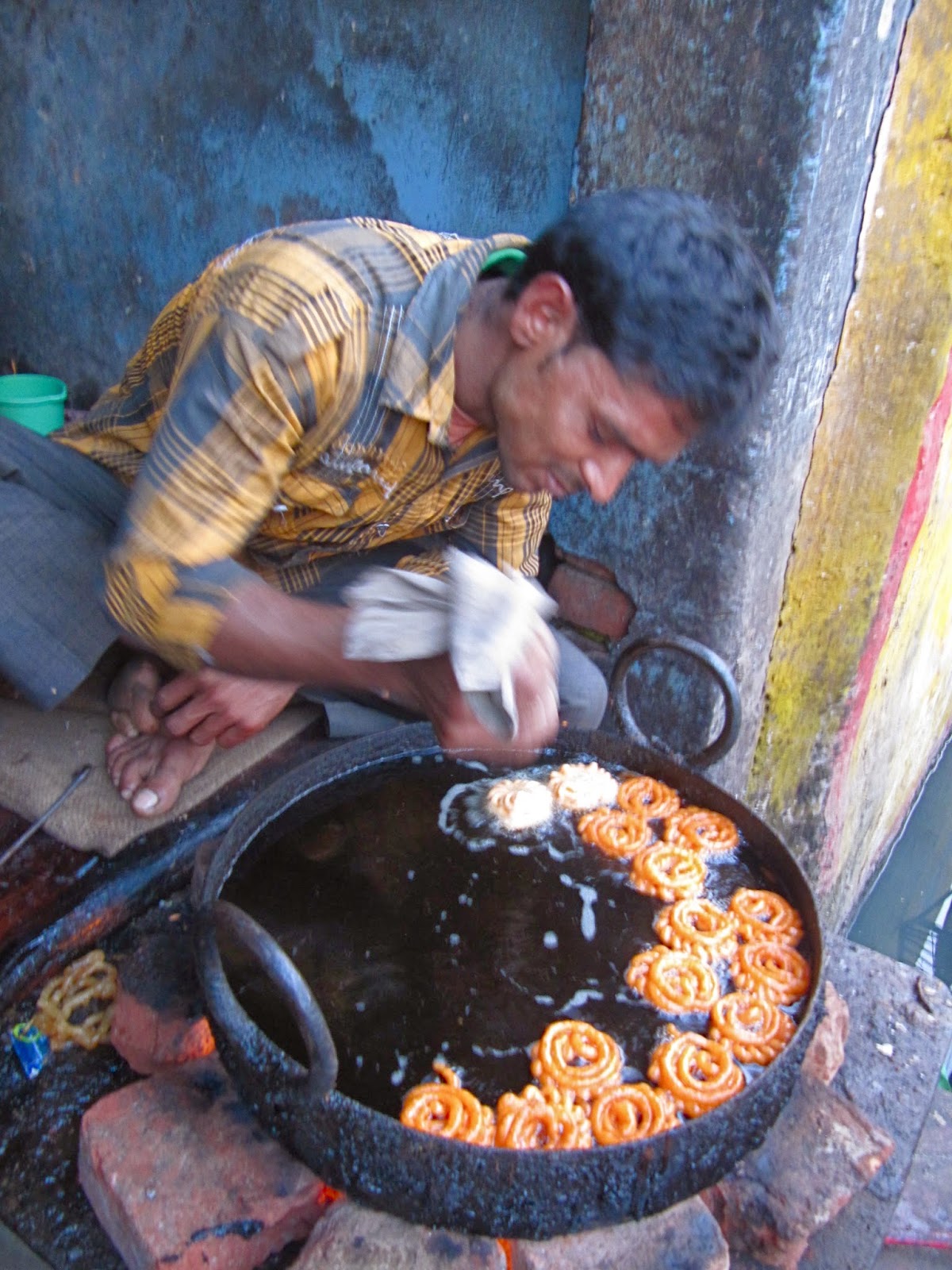 Hindi sweets are quite famous. After watching this guy making these deep fried snacks I couldn't help but buy one to try. Actually, the taste reminds me a lot of the Korean pastry 약과 (yakgwa), but these are a lot prettier in their swirly shapes. 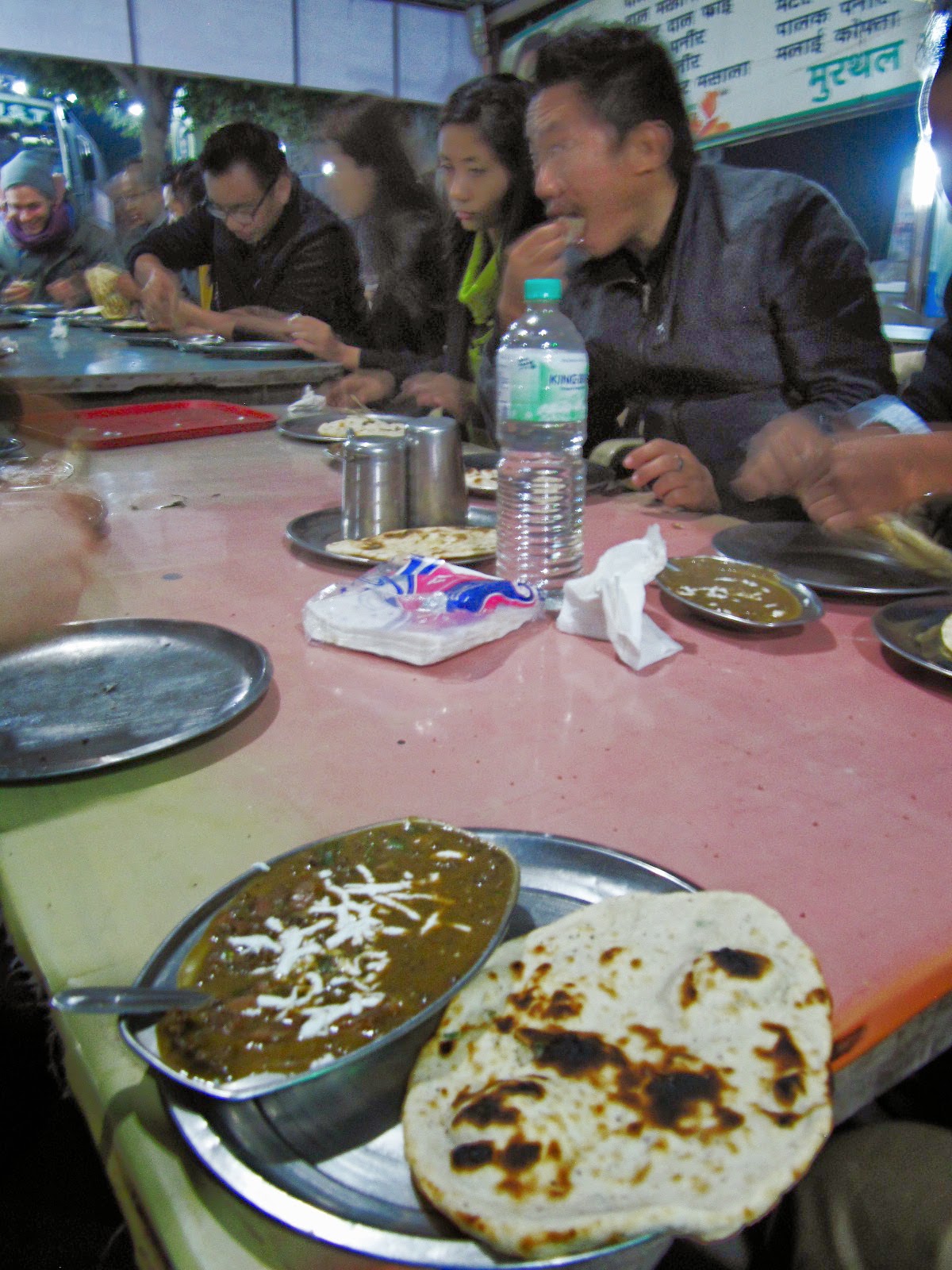 This one was from another roadside dhaba on the way back from Agra. Amazingly simple palak paneer, yet so delicious. 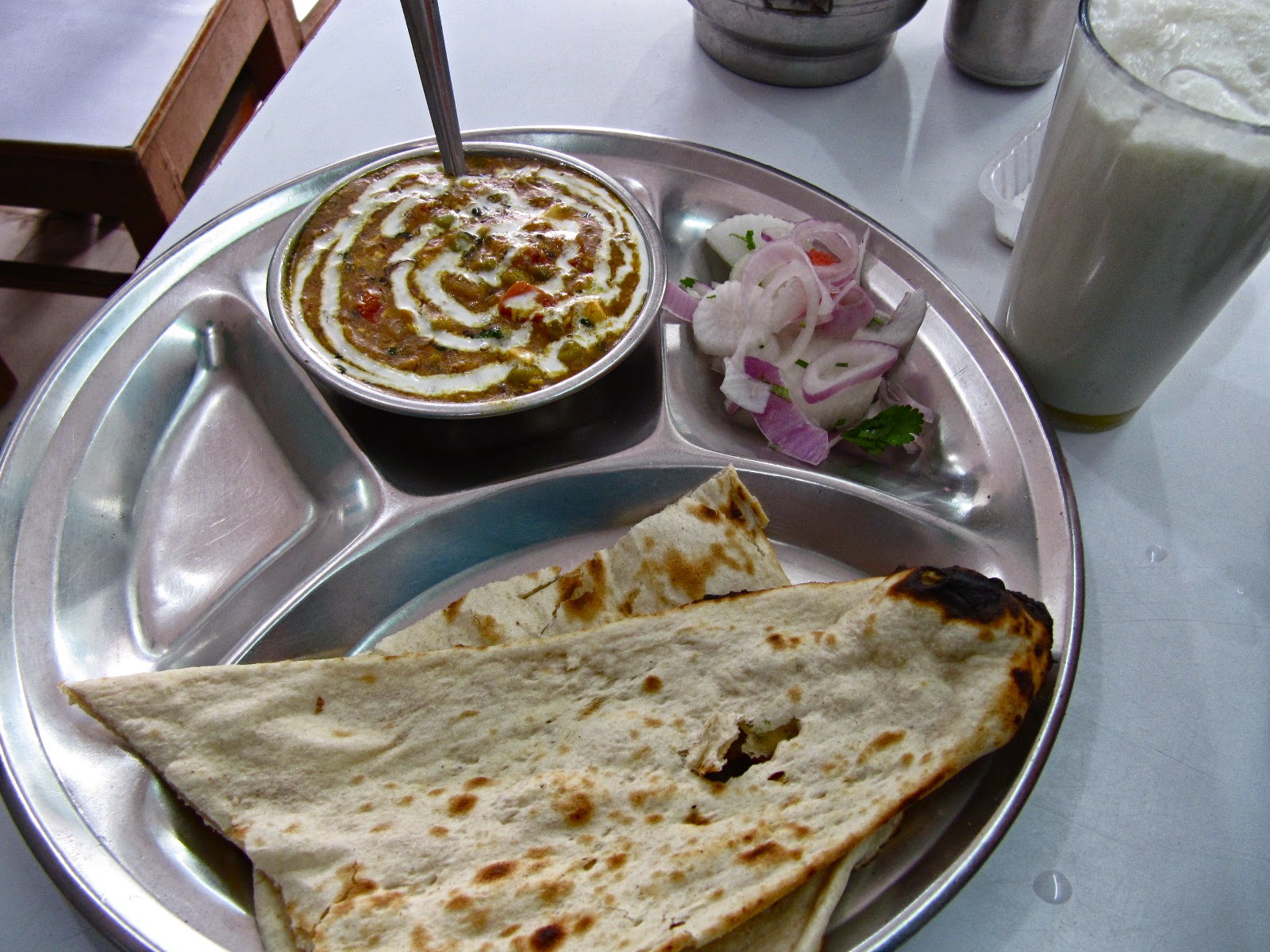 Another curry (can't remember which) from a small restaurant in Delhi. With a lassi on the side. mmmm... 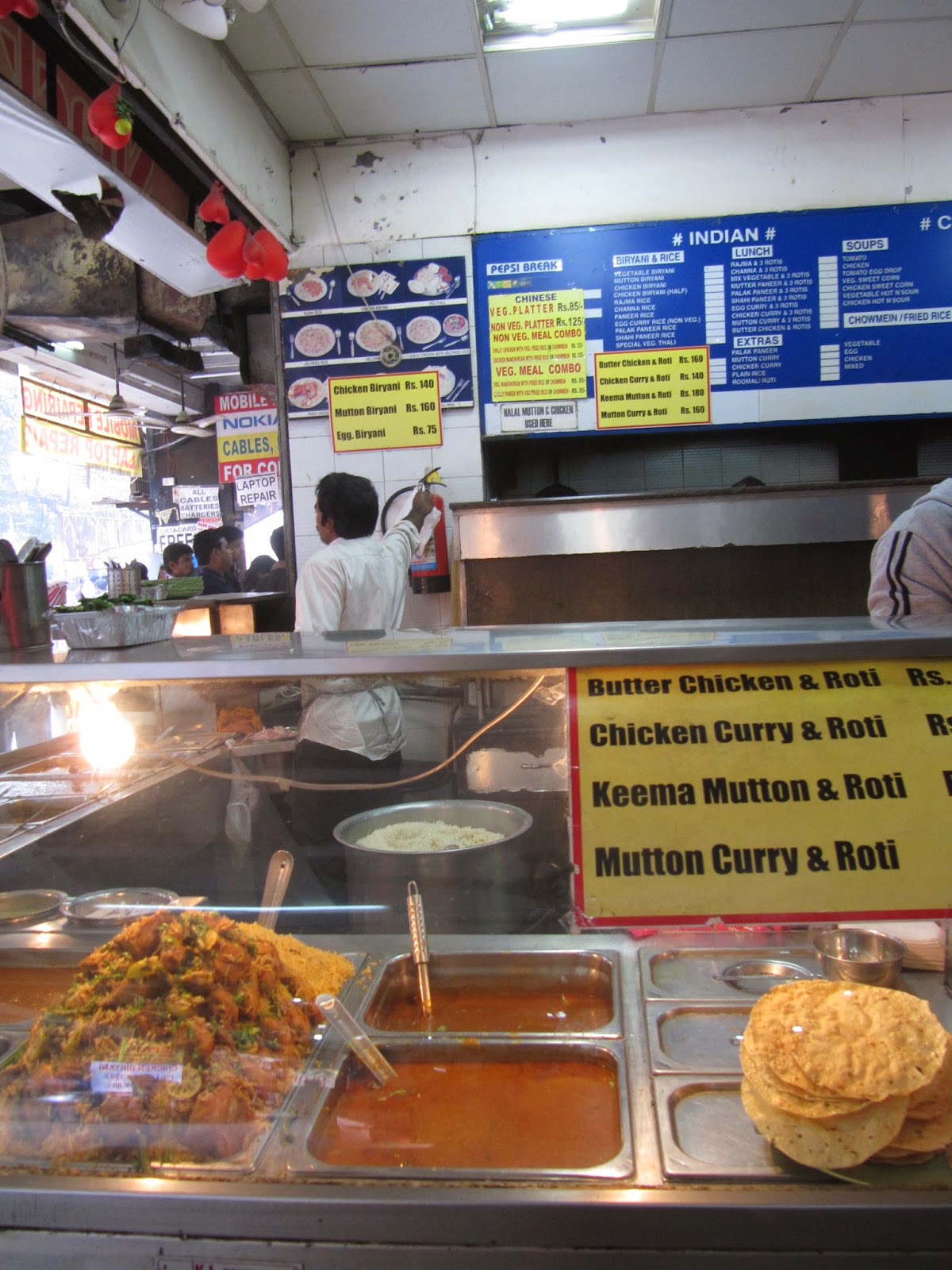 This was like Indian fast food/ take out. All the food was pre-prepared. Just order, and they'll serve it over to you. 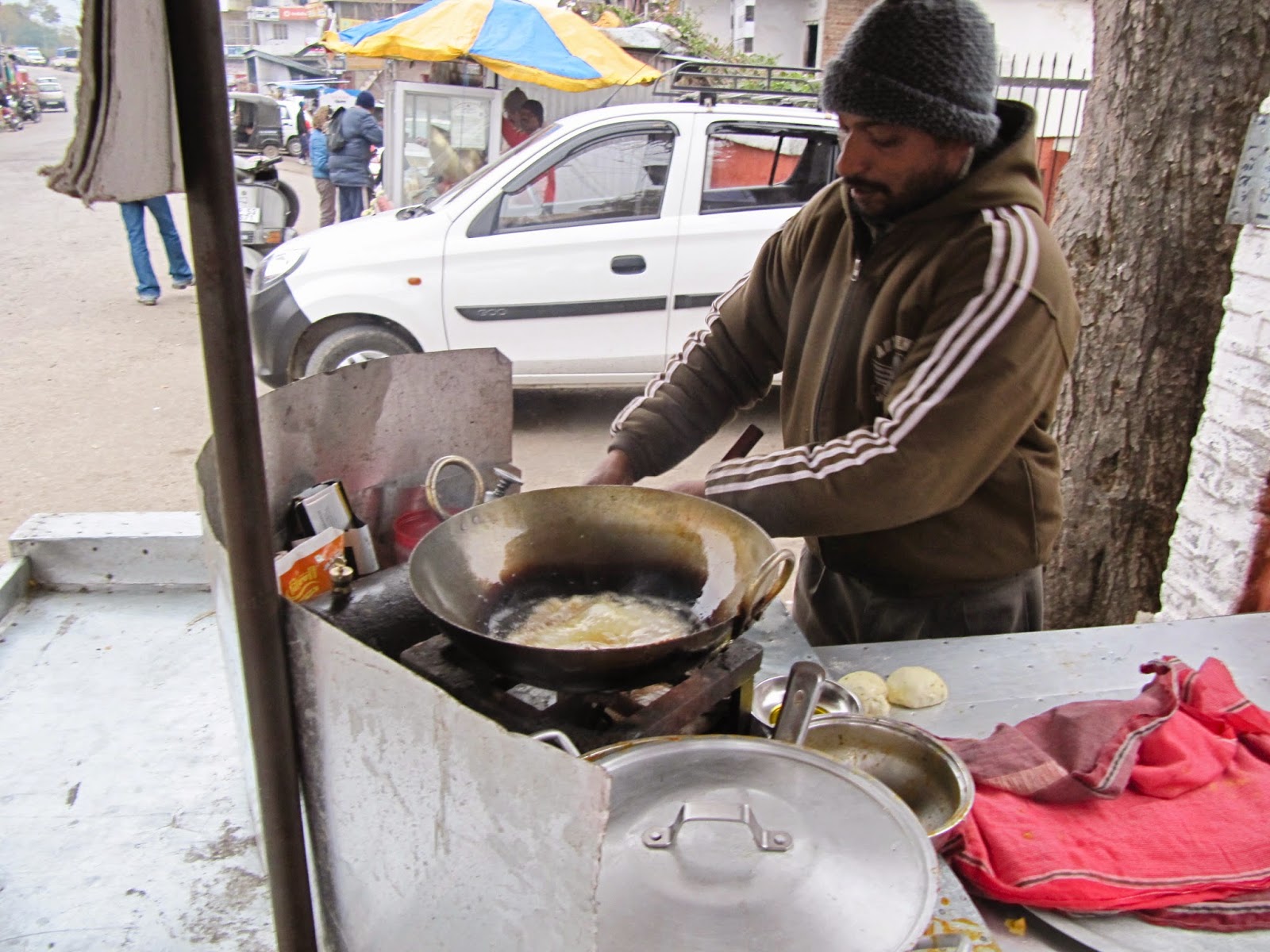 Here is a very typical Indian street food/ snack. This deep fried bread is called puri and is served up with some simple curry or yogurt sauce to dip in. 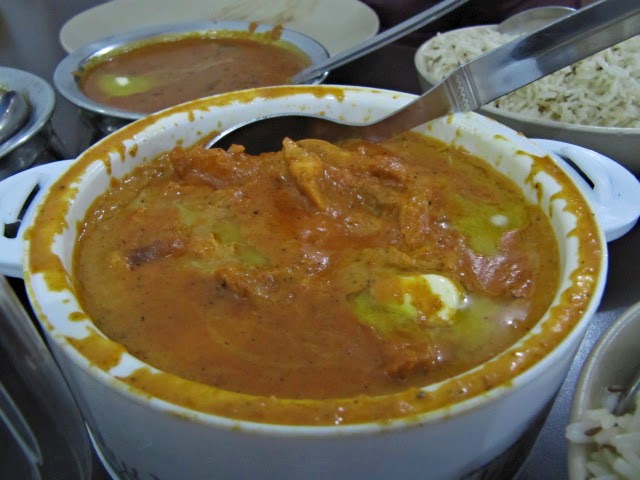 When visiting Indian restaurants before going to India, I always avoided butter chicken. Not sure why, maybe I thought it would be too rich or too fatty. But, butter chicken was one of the first dishes my co-workers ordered for us on our first Indian food outing. And, well, I realized what I had been missing all those years. Butter chicken is absolutely mouth-watering. Just melts in your mouth as you eat it. Definitely need to get this again soon. 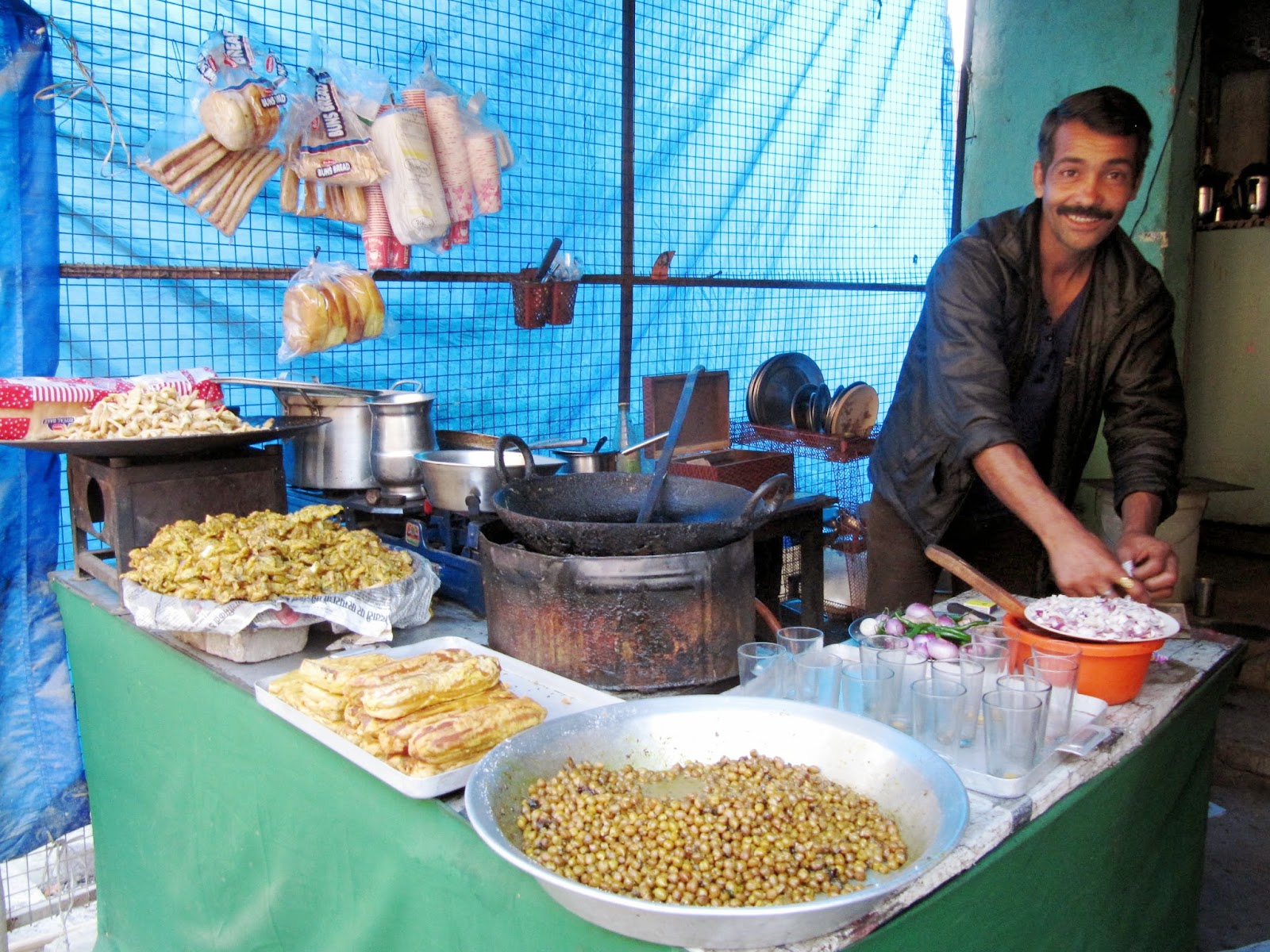 Here is a man selling a variety of street food. The one in front is fried channa (chick peas), others are other random fried things. Well, there's a lot of deep fried and fried food in India... 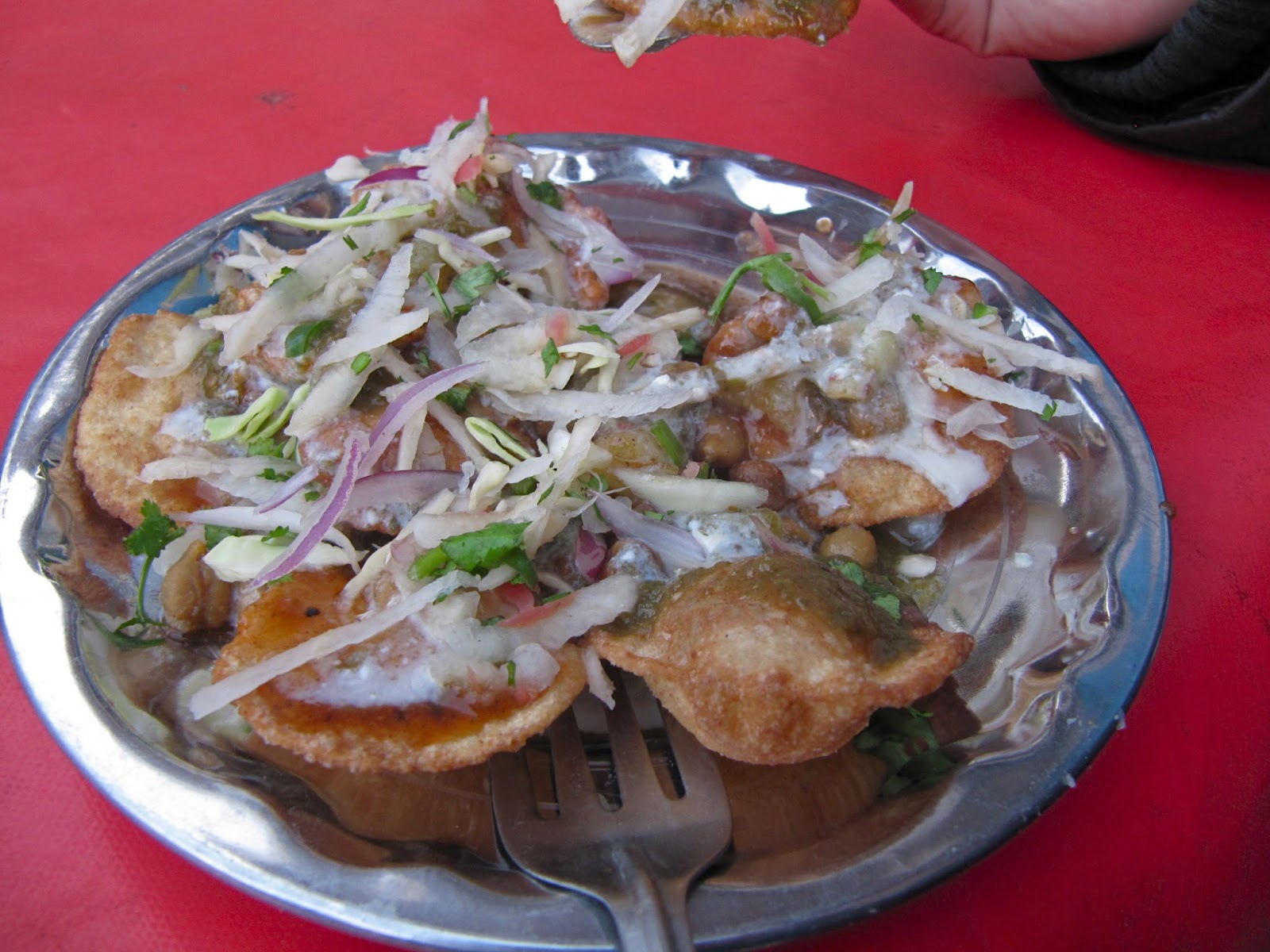 This is the kind of street food that tourists should definitely not eat if they don't want to get sick.  Basically fresh vegetables with chili sauce over some kind of crispy chip-like things. Tasty, but not recommended for tourists. 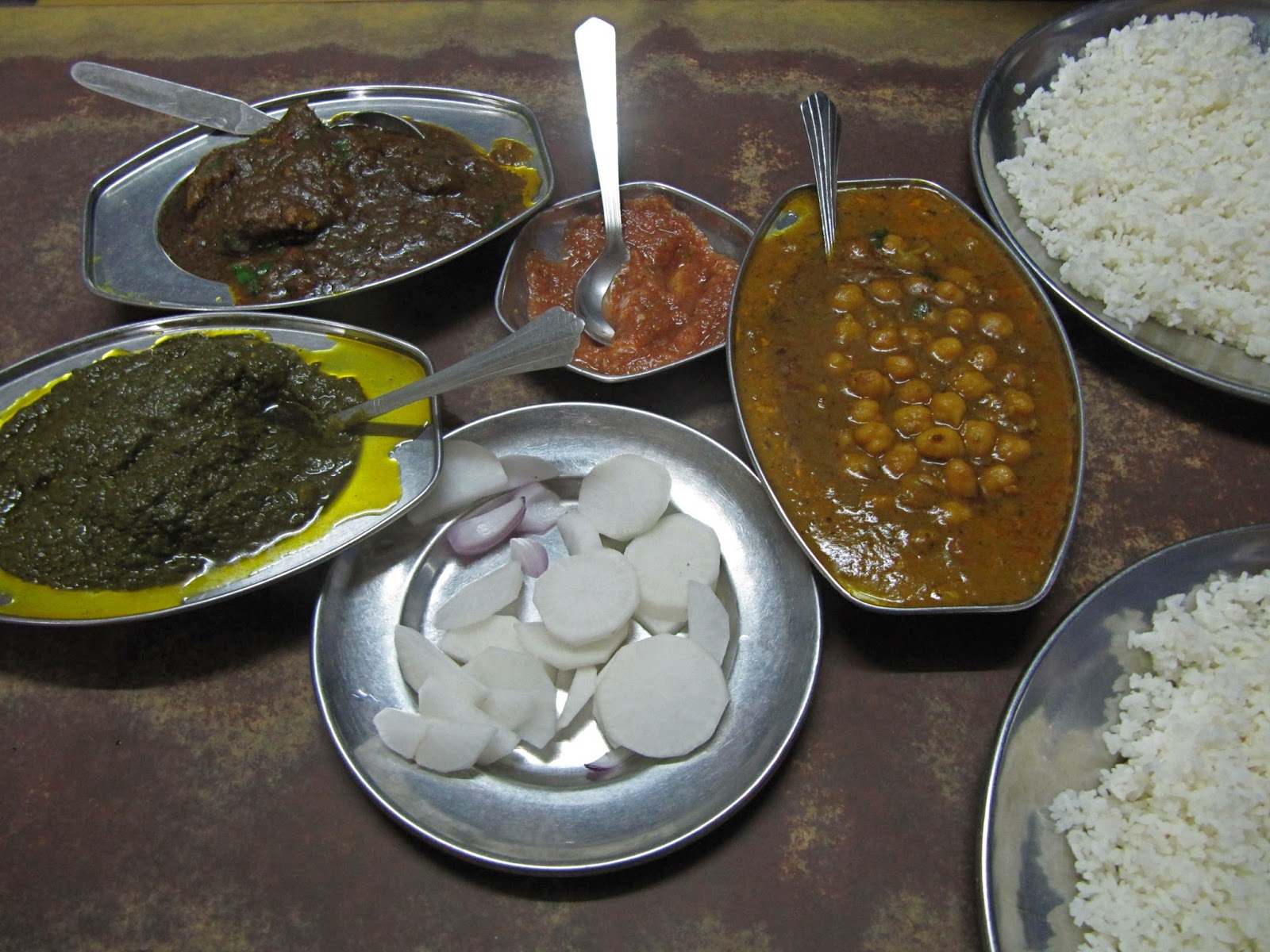 Here was our meal at the 'public dhaba' in Joginder Nagar. Channa masala, aloo palak, and mutton (goat) curry. Delicious and super cheap. 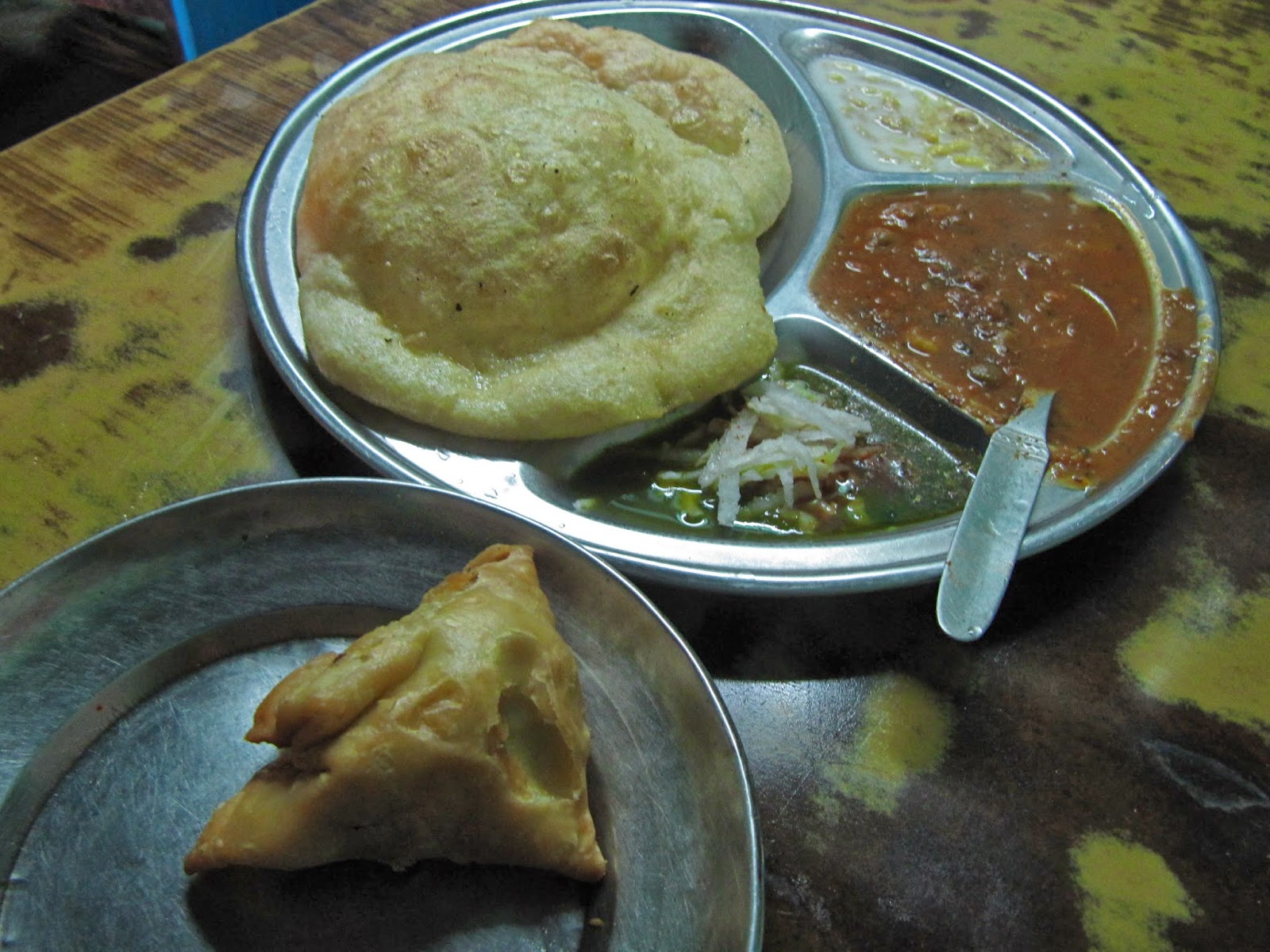 Here's another puri with various dipping sauces, plus a samosa at a popular hole in the wall restaurant in Baijnath. Lots of samosas, puri and maybe those are parathas in a stack in the back. I'm still a bit confused about the difference between paratha, chapati, and roti... they all look like flat and round bread to me.. 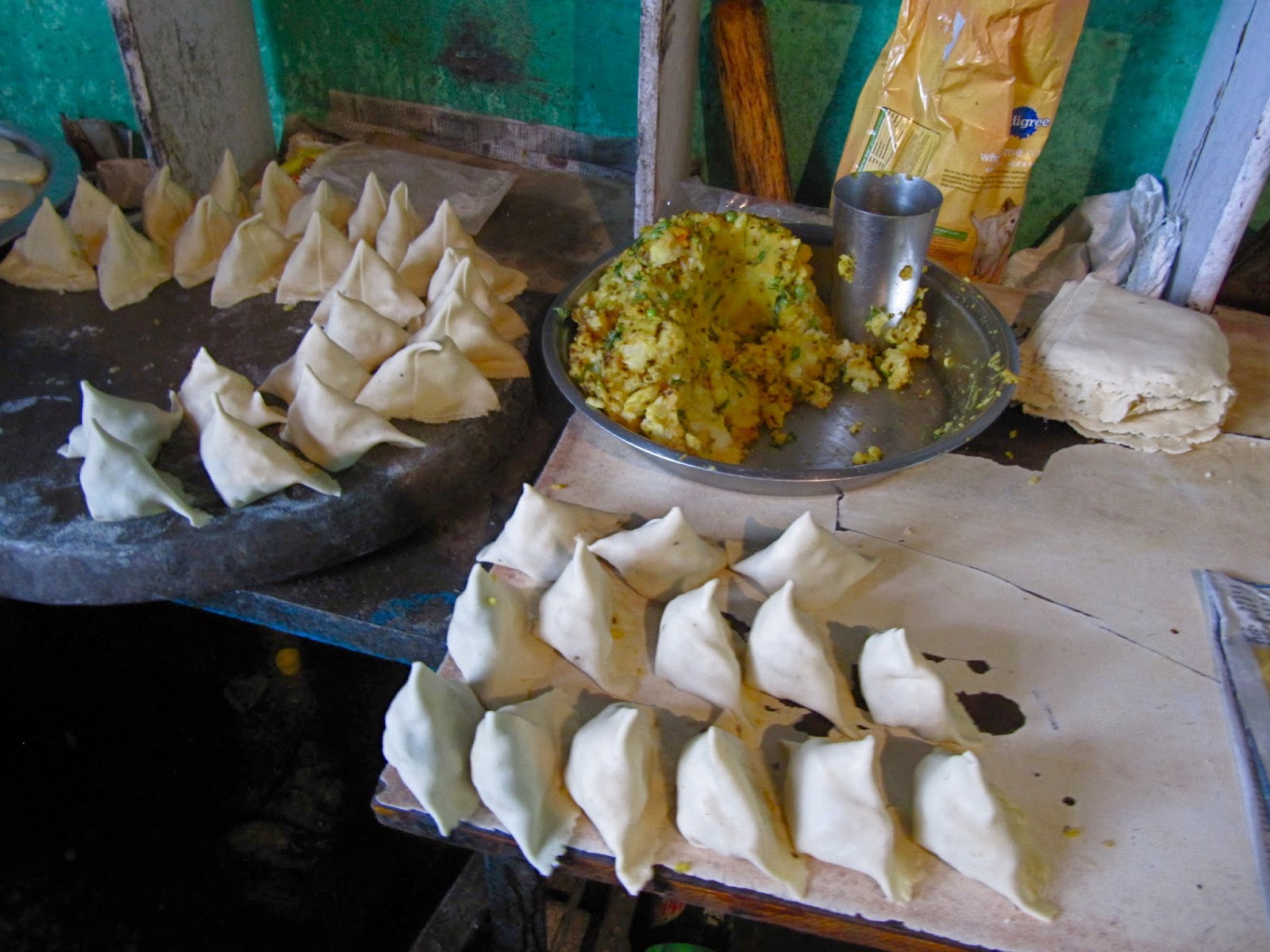 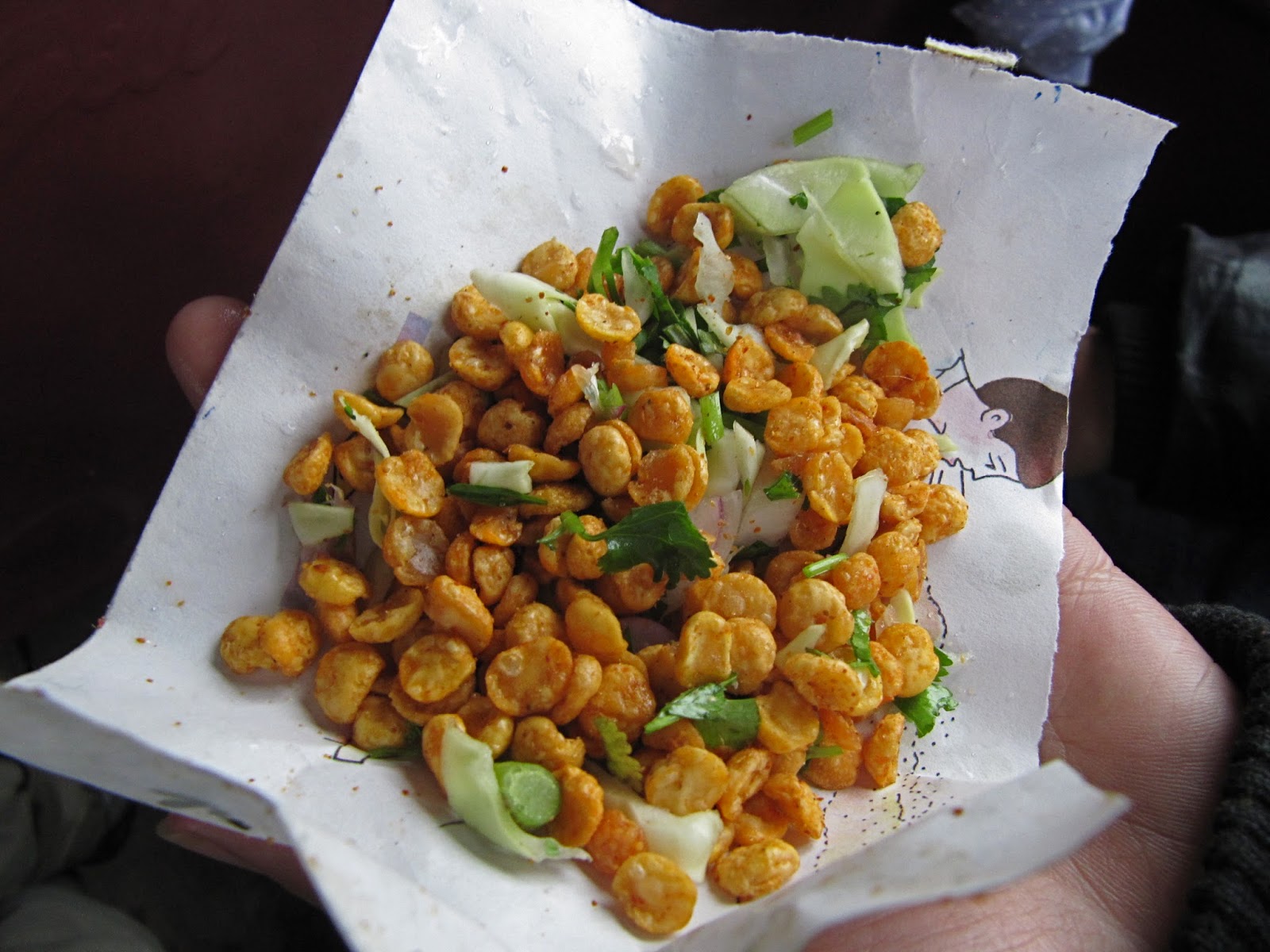 Here's another absolute tourist no-no which I should never have eaten. No idea what it was made of, but there was definitely cilantro and green onions mixed with some kind of spicy snack. It was being sold by a man roving bus to bus and he carried this around in a bucket and distributed it on recycled paper as you can see.  I don't think this made me sick though While in Palampur we decided to try out some more Hindi snacks. The yellow one was actually paneer (I think) in a cold creamy sauce. The orange one was actually made of carrots, but it was very tasty. After searching online, I found one dish called Gajar Halva. 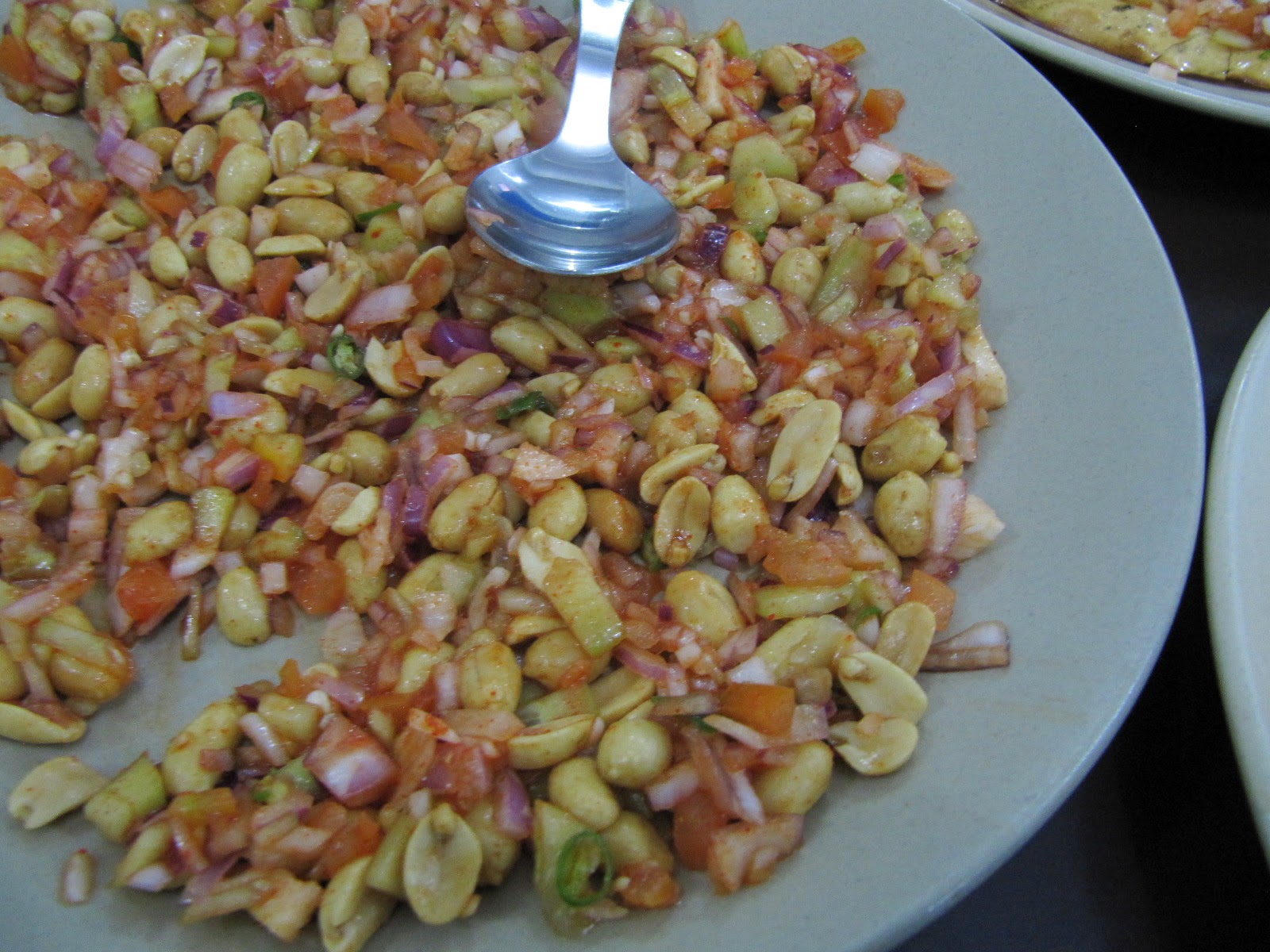 This one is a pretty typical snack to eat while drinking in India. It's basically peanuts mixed with all sorts of fresh veggies. It's really nice, but again, I don't know the name of this dish. 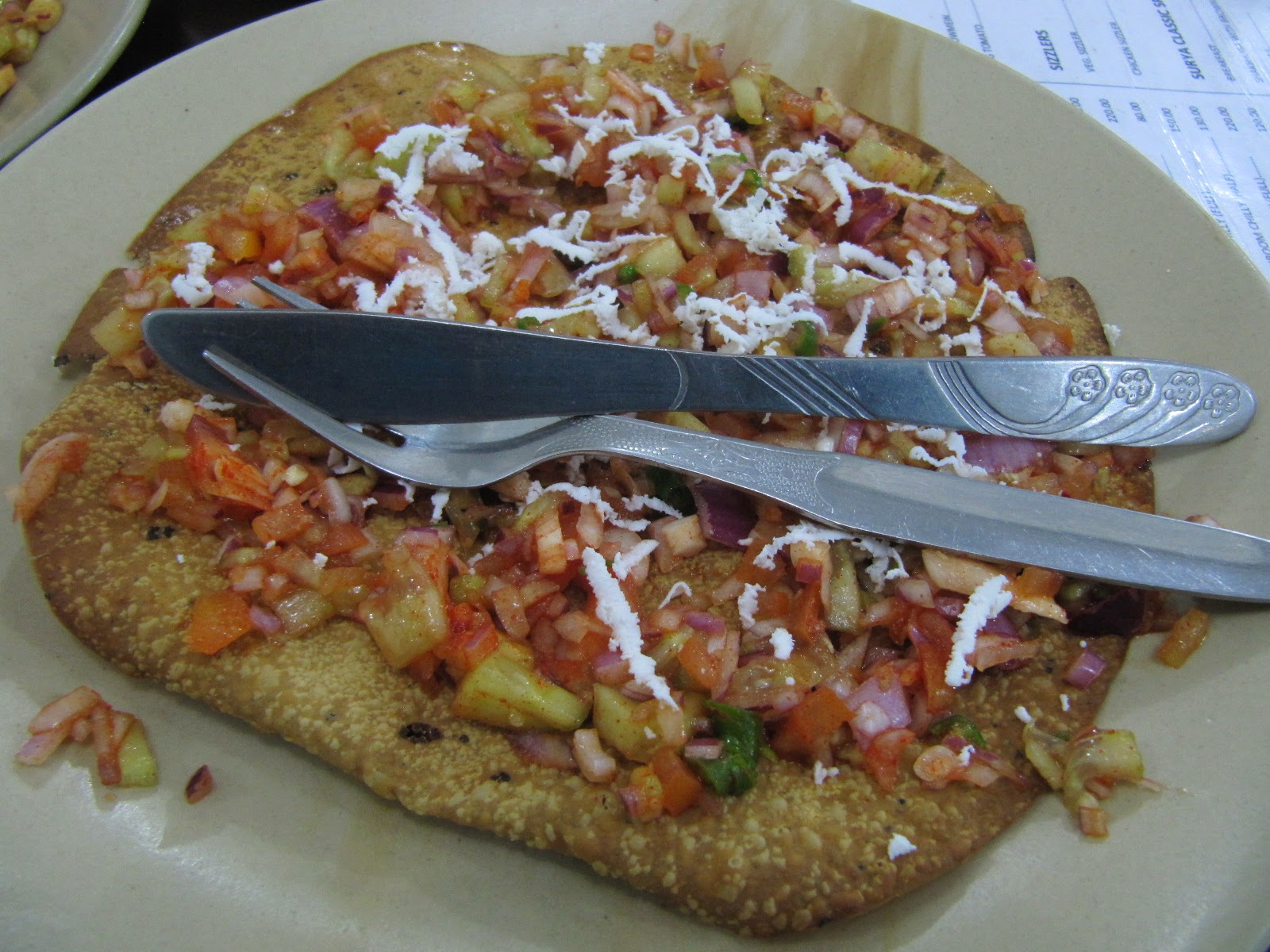 Here's a pappadum with fresh vegetables on top. This is quite tasty. The pappadum is almost cracker-like in consistency so it's a little difficult to eat as it is very brittle, however with this veggie mix on top it's quite tasty. 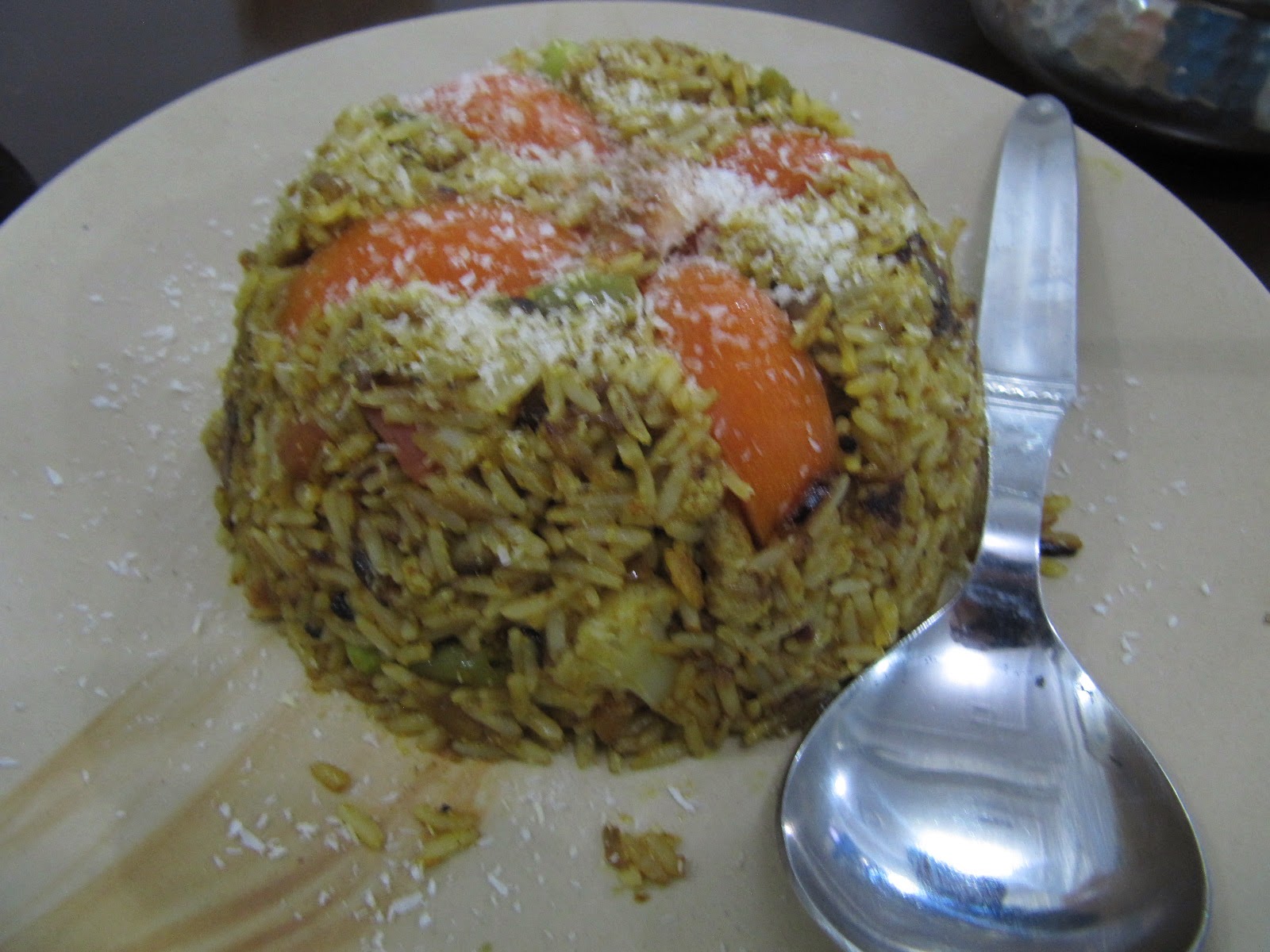 I tried a few different biriyanis while in India. They were all really nice. Basically this is slightly creamy rice with many different spices. 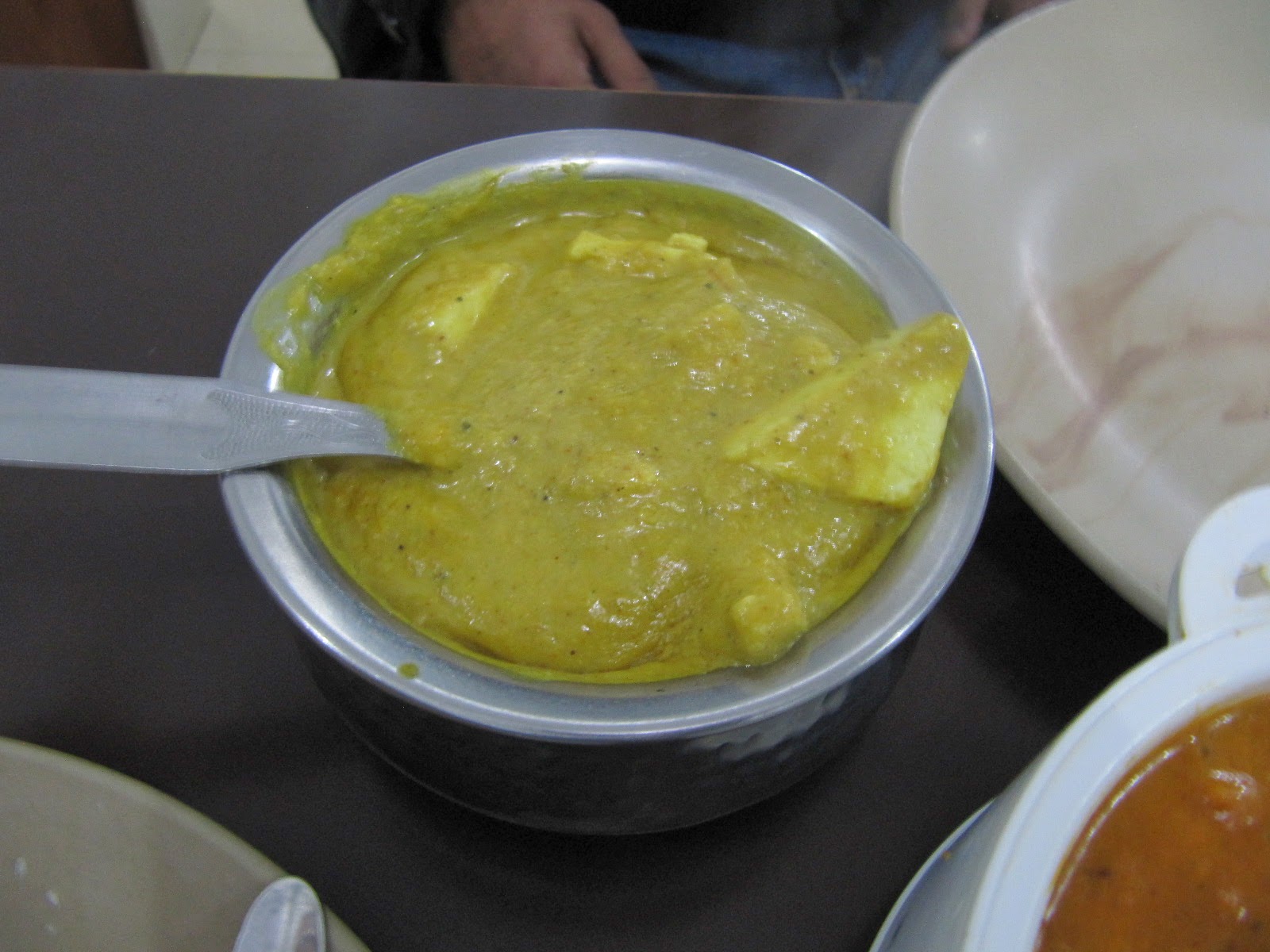 Don't remember what this one was, something with paneer. 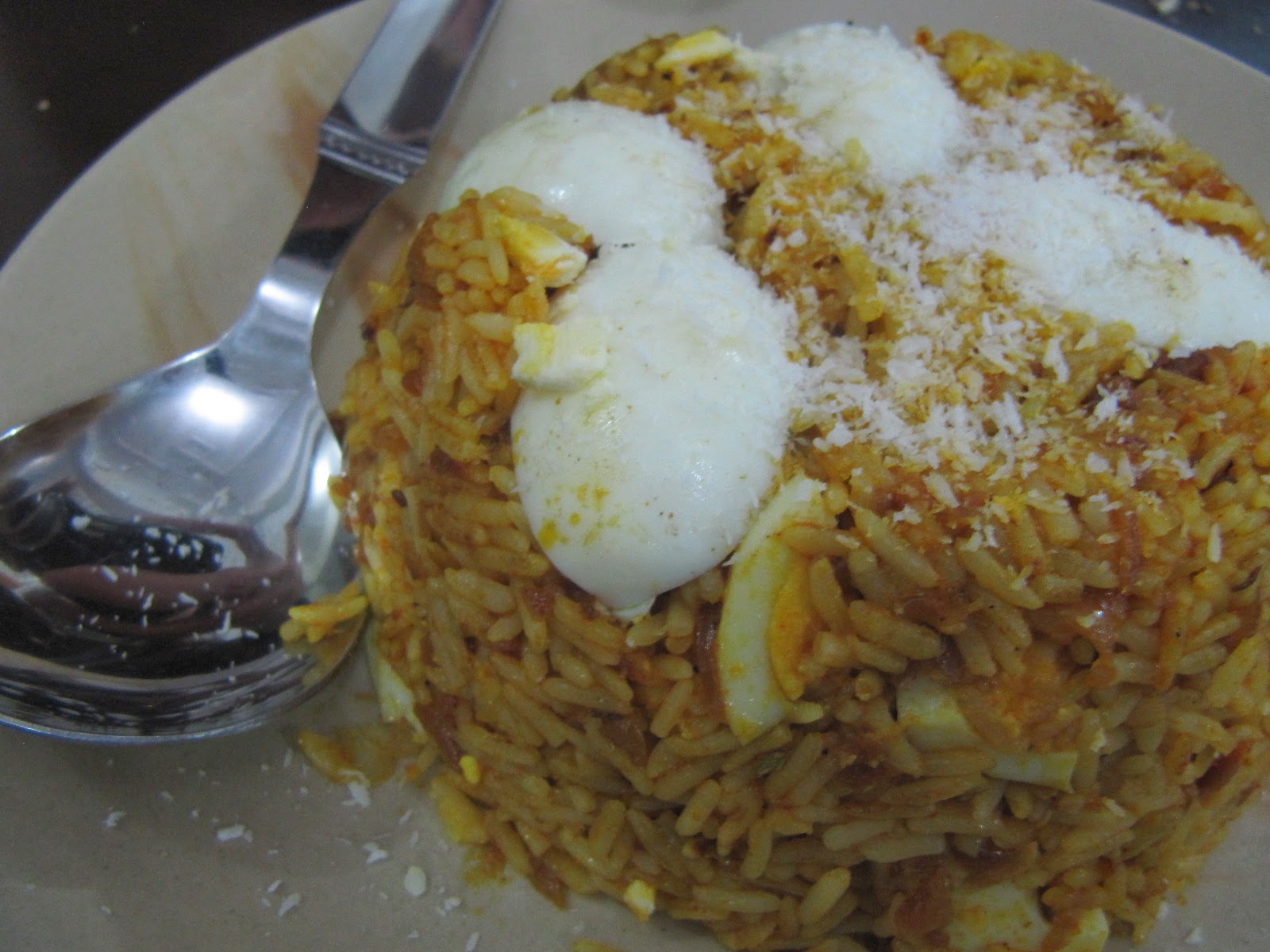 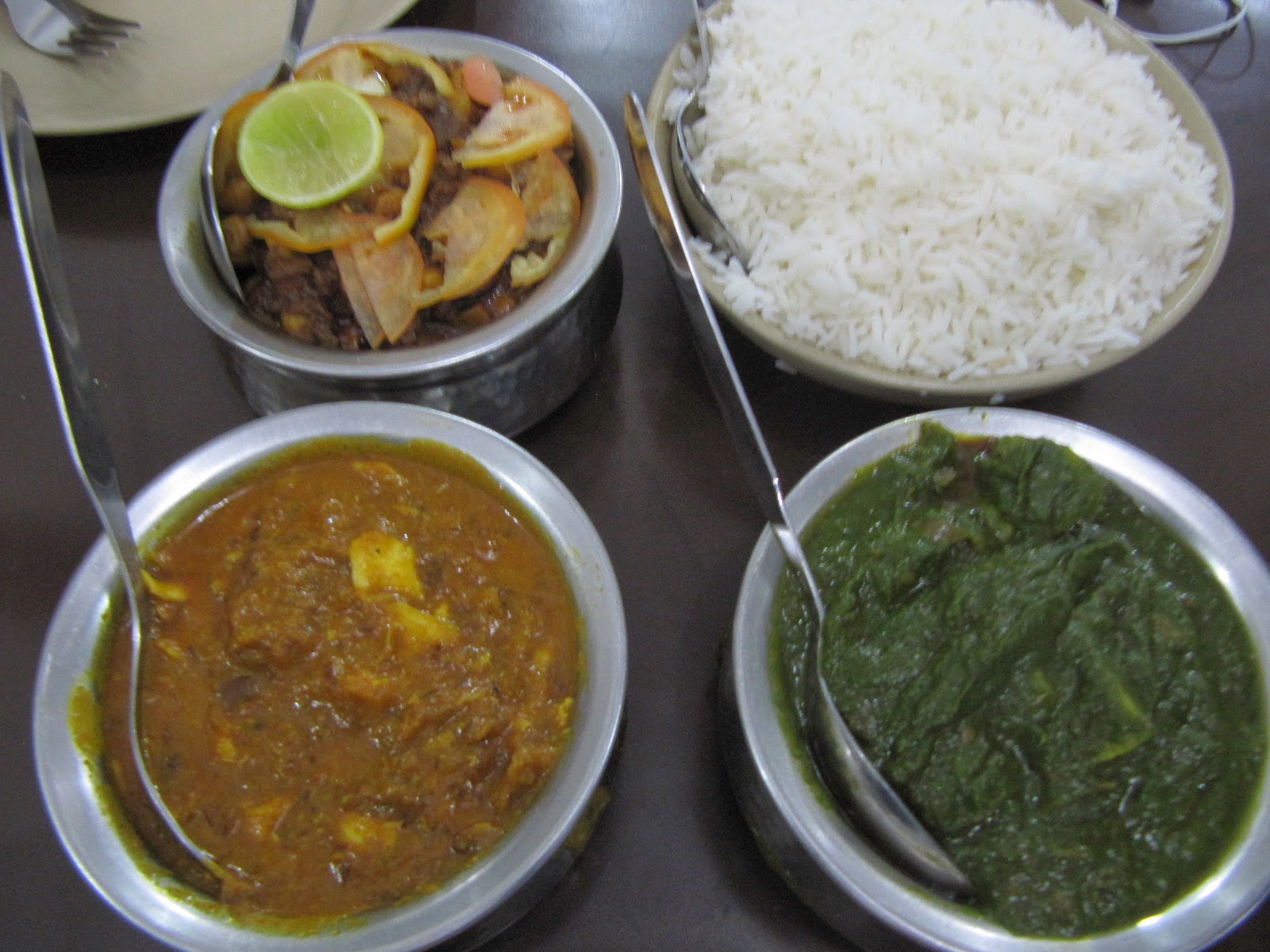 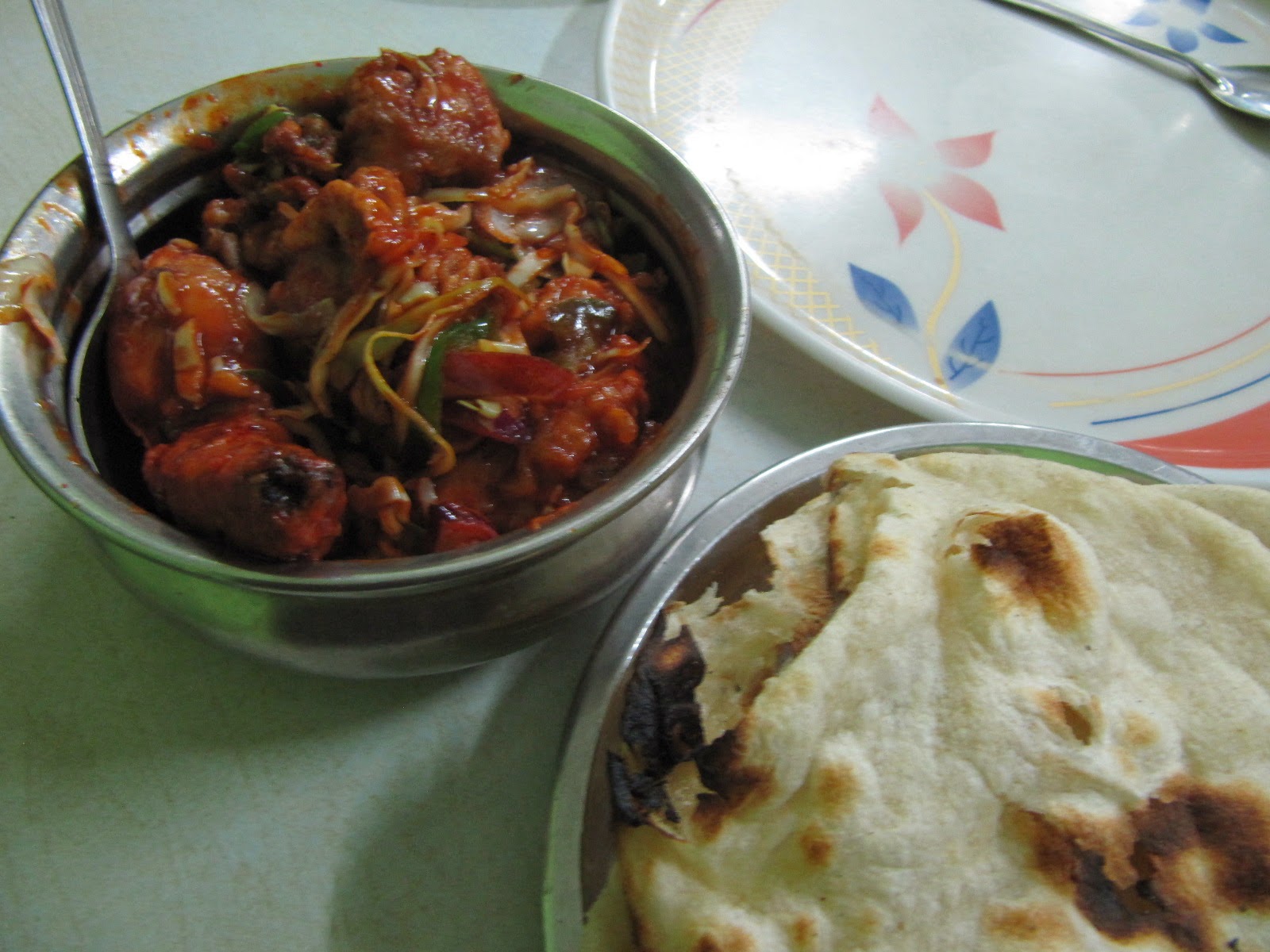 Don't remember what this was... but I'm sure it tasted great... 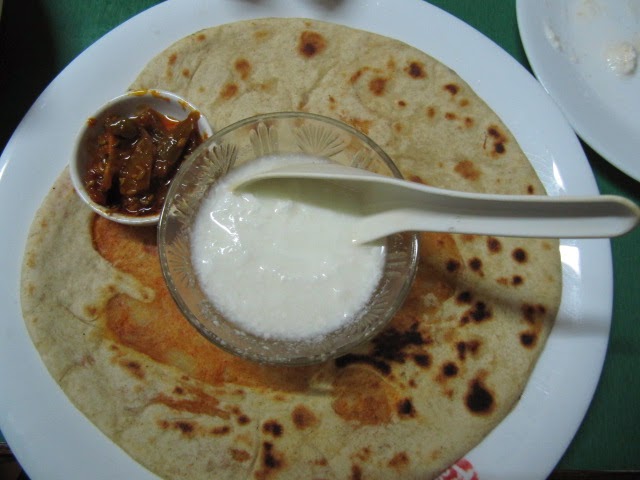 Finally, my last breakfast in India. I was told I must try Paratha with curds as it is a very typical Himachal Pradesh breakfast food. Unfortunately, after several attempts (usually after breakfast time) I failed to find it in my town. So, on my last morning in Majnu ka Tilla in Delhi (the Tibetan colony in Delhi) I found paratha with curds on the menu at the Tibetan restaurant where we got breakfast and I figured it was my last chance to get it. Anyway, it was quite nice, the curds reminded me of my homemade yogurt actually and the bread was simple and nice to dip in the curds.

Before leaving India, I made sure to pick up a bunch of Indian spices. I hope I can use them soon to try making some Indian dishes!
Posted by 조안나 at 10:51 PM