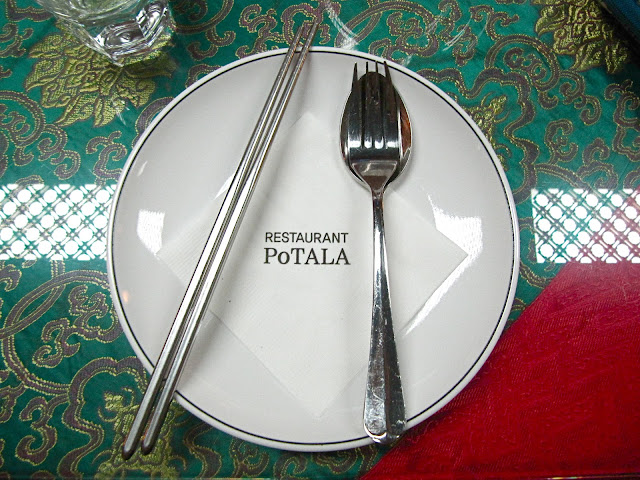 Located in a rather unexpected location along the Cheonggyecheon after being forced to relocate from Myeongdong last year, Potala is the only Tibetan owned restaurant in Seoul. As you walk in, you’ll first notice the lovely atmosphere. Colorful decorations cover everything, but never feel overdone. If you like any of the decorations, they even have a store where they have items for sale at reasonable prices. 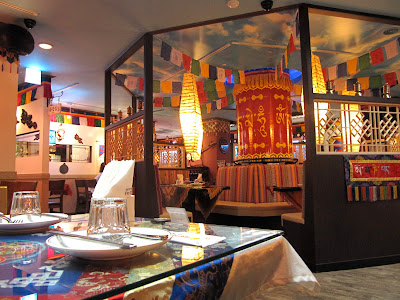 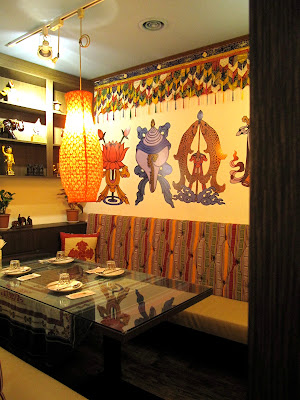 If the menu has any problems, it would be that there are too many choices. Knowing this ahead of time, I gathered twelve friends to join me so we could get a full sampling of the menu. The menu at Potala is great for sharing, and it was fun with such a big group, we just continued to order one dish after another to sample as much as we could. Tibetan food is not known for it’s richness, like food from some of it’s neighbors like Nepal, India, and China. However, folks who enjoy trying new cuisines will be intrigued by some of the dishes. We made sure to try typical Tibetan fare such as butter tea, tsampa, momos, bread and some of the noodle dishes, first and foremost. 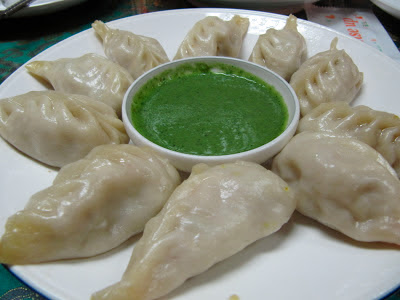 We first ordered the momos, a Tibetan dumpling. These were a big hit with everyone, but then again, it's hard to go wrong with a dumpling. I've tried various forms of dumplings in many countries, but I don't think I've ever had a bad one. There's something about stuff wrapped in dough and cooked that just always works, no matter the ingredients. 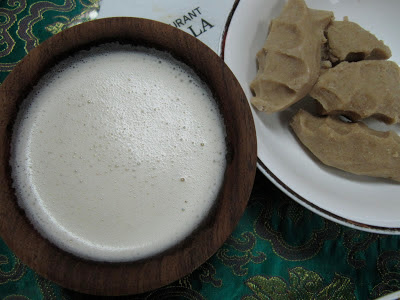 Before the feast I did a little research as to what is typical Tibetan food and found butter tea, specifically yak butter tea and tsampa to be on the top of the list for standard Tibetan fare. I still have not figured out how you make a tea from butter, but it tastes rather how you might imagine butter tea to taste like; not particularly great. But, I had to try it, if for no other reason than to check it off my bucket list. Tsampa, which often accompanies butter tea in Tibet is barley flour which they may add ingredients, like butter tea, to create small cakes like the ones you see above. The taste is, again, not great, but you can imagine it to be a hardy snack after a day of herding sheep on the Tibetan plateau. 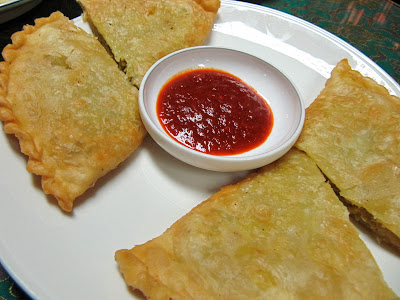 The fried bread Sha Bhakle was a huge hit for us. This was a flaky dough filled with meat and veggies. The menu explains that Sha means meat and Bhakle is a form of bread in Tibet. However, upon searching for this dish on the web it doesn't seem to exist on any English language sites. If anyone can find some more info about this for me, post it in the comments. We all really loved this stuff. 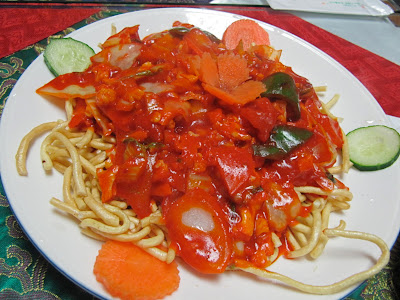 The Thuk Fry was an interesting dish. Noodles fried to crispiness and covered with vegetables and pork. This wasn't really anyone's favorite dish, however, probably because of the strange consistency of the noodles.