A hike to Sujong Temple 수종사 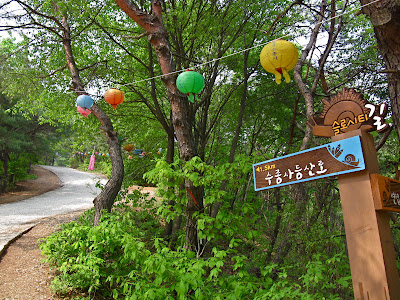 Since Buddha's Birthday is just around the corner, on May 17th, we thought it would only be fitting to take a trip up to Sujong Temple/ 수종사. We've been wanting to go here for a while. We see it every time we drive home from Yangsuri, as it's sitting high up on the side of 운길산 (Ungilsan mountain) overlooking the junction of the north and south Han rivers. 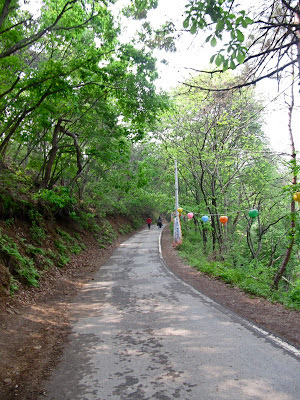 To get up to the top, there are several options. There is a road, and many chose to drive up, however hiking may be more rewarding. Small hiking paths zig-zag all over the mountain and they often cross back to the road. We hiked up a combination of both road and hiking paths. 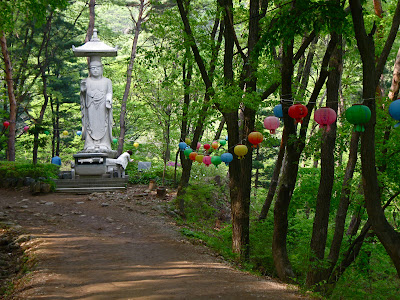 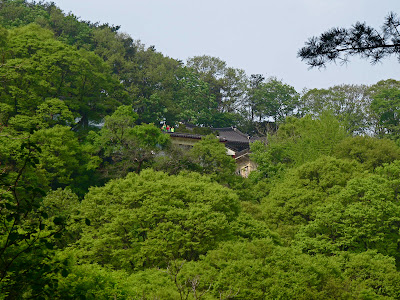 Finally, after about 45 minutes of hiking, we caught our first glimpse of the temple from afar. 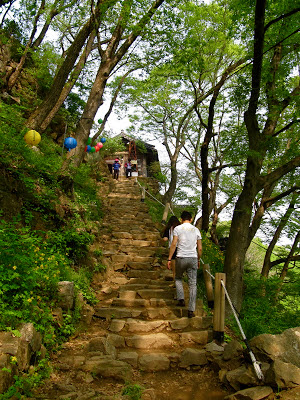 Another 10 minutes of hiking up we finally got to the temple. As with most temples at this time of year, the path was decorated with lanterns for Buddha's Birthday. 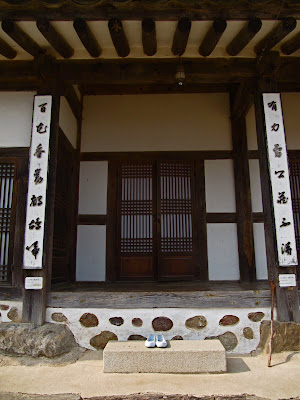 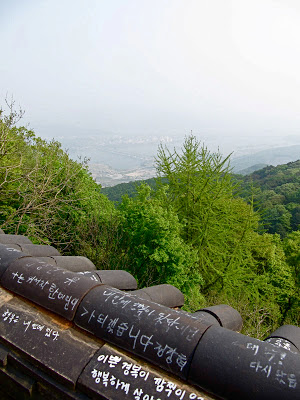 The temple is most renown for it's view looking over Yangsuri, however with the hazy skies yesterday it was hard to make out much below. 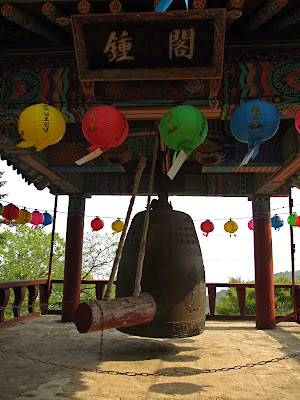 However, despite being famous for the view, it also has an impressive legend to go along with it as well. In 1458, King Sejo was passing through Yangsuri and stayed there overnight. During the night, he heard the sound of a bell, but upon asking the villagers in the morning where the bell sound came from they said it could not have come from the village. Perhaps, though, it could have come from an abandoned temple on Ungilsan, they told him. He sent his men to investigate and they came across a cave filled with Buddhist sculptures... and water dropping that made a bell-like sound. After this, the temple was born with the name 수종사 (水鐘寺) or 'Water Bell Temple'. 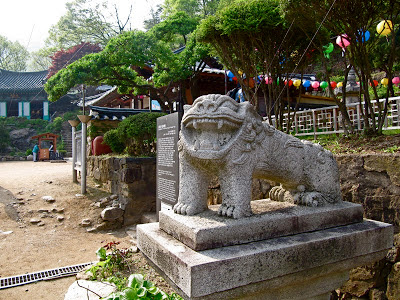 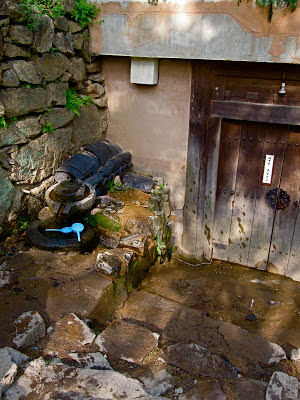 It's quite easy to get here from Seoul. Take the Jungang Line to Ungilsan station (50 mins from Wangsimni Station). Come out of exit 1, turn left and take the first street to the right. Follow the street and you will eventually come to signs pointing to the hiking trails to the temple. It's approximately 1 hour hiking to the temple and you can walk up the road or the hiking trails, whichever is more comfortable for you.
Posted by 조안나 at 11:04 PM 6 comments

Well, as you may have noticed, blog posts have decreased significantly in the past year, and maybe some of you have realized that's mostly due to graduate school. While working full time here in Korea I'm also taking classes part time online through St. Michael's College in Vermont. I have just 5 more weeks of online classes and then I will go back to the states to complete my final semester in person, on campus (like last summer). Then I will officially have an MA TESOL.

My job here at YBM SiSa will be ending at the end of this month which is rather bittersweet for me. In some ways I really love this job, especially for the students. It's the most satisfaction I've gotten out of any job in Korea.. sometimes I hardly feel like I'm working, just chatting with friends (and pointing out some grammar mistakes while we do it). That's the great thing about teaching adults here in Korea, I guess. Perhaps once I finish my contract I'll write up a proper review for the school as I have with my past jobs.

Those of my readers who are also friends with me on facebook will already know, but I am engaged and getting married this coming September. We're having the wedding here in Korea and we'll have a traditional Korean wedding. We've already gone hanbok shopping (posts to come later) and we're still debating what to do about photography. Several people from home will be coming into town, including my mom and my best friend from college. I just hope I can have a ceremony at home in the States sooner rather than later so I can celebrate with the rest of the people I care about from home.

While we haven't booked any tickets yet, we've pretty much decided to take our honeymoon in Western China, in Yunnan province. When I tell Koreans this, they shake their heads because they can't understand, but Chinese people's eyes light up and tell me it's an excellent decision, so I think I'll trust the Chinese on this one. More motivation for me to go to China is the fact that I've now been studying Chinese since October. My Chinese still sucks from lack of practice combined with terrible grammar-translation teaching methods used at both hagwons I tried attending. I'm hoping if I still have money in my bank account after a summer at home and hanging out with guests from home in Seoul for the wedding, that I will be able to stay in China for a little longer after my future husband has to go back to work... considering that I won't have any job to go back to. If anyone knows of a good language school in China (any city) where the majority of students are not English speakers, let me know. Making Chinese and Japanese friends is how I learned Korean... perhaps making Japanese friends and Korean friends can help me learn Chinese.

Finally, I'm hoping to find a university job in Seoul starting next March. If anyone hears of any job openings or has any tips for finding decent uni jobs, please let me know!
Posted by 조안나 at 10:32 AM 6 comments 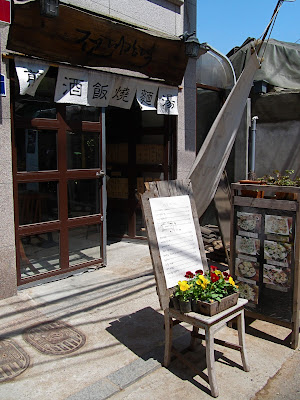 Today I met one of the staff members from KOCIS, the makers of The Korea Blog for lunch. She brought me to a really cute restaurant on the Sejong Village Food Culture Street (세종마을 음식문화 거리) near Gyeongbukgung Station. 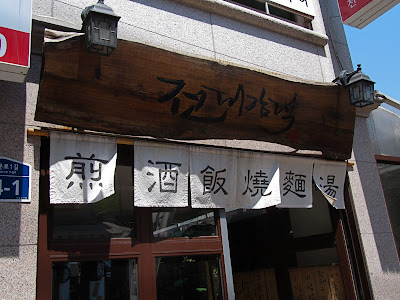 전대감댁 is the name of the restaurant 전 (Jeon) is a family name, 대감 (Daekam) a word meaning a high ranking official from ancient times and 댁 (deak) is the honorific form of house (집). So, this could be called Mr. Jeon's House in English. 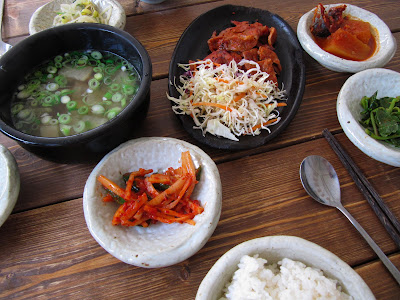 The food was very nice and light. I didn't have that heavy uncomfortable feeling in my stomach I often have after eating a typical Korean restaurant meal. We just ordered two dishes, 'today's special' which was a beef and radish soup and a grilled pork dish with cabbage. It was just the right amount of food for two people. 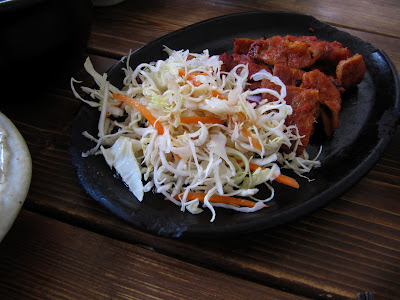 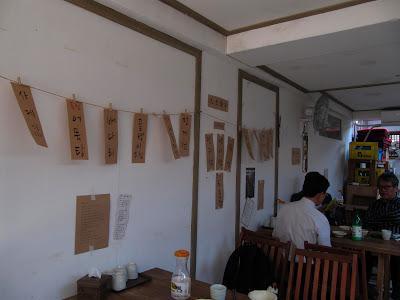 However, the thing I liked most here was the ambiance. Water fountains gurgling, fish swimming around lilypads and even an eating area open to the sky above (I guess it was covered by glass).  Food and drinks served on really beautiful ceramic plates, bowls and cups. 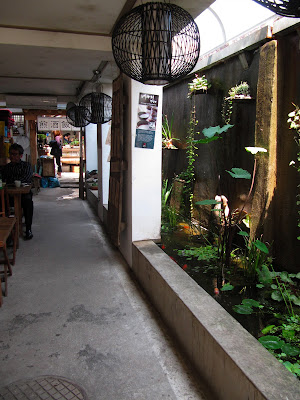 If you happen to be in the area,  be sure to stop by. Great for lunch, however, it seems to be most popular in the evening for its 전 or Korean pancakes. 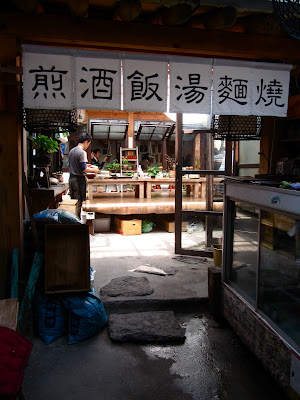