My brush with fame

Otherwise known as: "I was on Japanese TV and all I got was this lousy pen"

We were informed last week that the Japanese broadcasting company NHK (equivalent of KBS here in Korea) was coming to our Korean class to film a show about Korean language classes. They instructed my class and some other advanced students to come to school an hour early and film the show. We were also told that the Korean drama star Yoon Sang Hyun would be coming too for the filming. We didn't know who Yoon Sang Hyun was, but evidently he's a fairly big deal in Korea and has been in several dramas.

They made a mock classroom of six desks in two neat rows with men and women evenly separated. Normally it's just three of us ladies with desks strewn about the place wherever we feel like sitting. 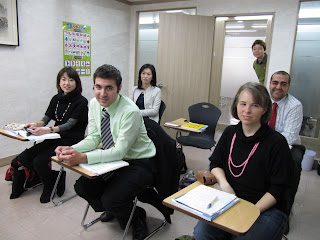 Next they filmed us for an hour and 20 minutes... saying the same lines over and over again

By the end of this, 1 hour and 20 minutes later we were so sick of these phrases that we never wanted to hear them again. The filming crew shot from various angles. The best was when Yoon Sang Hyun finally came into the classroom for his spotlight. They filmed him close up with us in the background saying Wow! They speak Korean so well! It's amazing! I still haven't figured out what the point of that was... 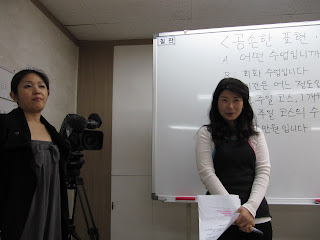 My poor teacher who had to teach this "class" on film.. plus one of the Japanese filming crew on the left.
After they finished with our class, the evidently moved on to the front desk where Yoon Sang Hyun tried interviewing the our young secretary. She seemed so nervous that she couldn't follow the script and kept jumbling her words. We all went to spy on them during our class break... 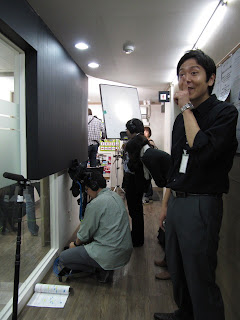 Finally at the end they interrupted our class to announce that Yoon Sang Hyun would take a photo with all of us. Of course, he's a star and couldn't be bothered to let everyone take a photo with their own cameras, so though someone out there has a photo of me with him and my classmates, I've been unable to track this anonymous someone down for a copy. I'll have to settle with this photo of some of our teachers with the curly-haired effeminate Yoon Sang Hyun 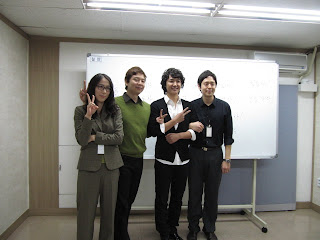 Yoon Sang Hyun is second from the right.
After all was said and done and Yoon Sang Hyun had bid farewell, the NHK crew presented us each with a wrapped gift. I thought maybe it would be something really special for all my hard work, aka actually doing my make-up and straightening my hair and coming in over an hour early when I'm usually 20 mins late... and I opened it to find a cheap plastic pen. Oh well, at least now I can say I've been on a crazy Japanese program... even if I'll never see it... I guess it won't air til next season, sometime in Feb. or March... in Japan. 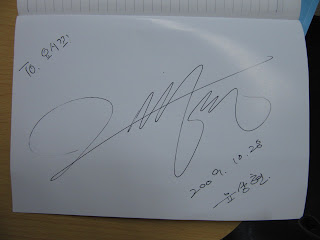 A signature from Yoon Sang Hyun that my classmate chased him down for... in her Korean notebook...
Posted by 조안나 at 2:30 PM