Skating at City Hall Plaza and my Christmas Eve in Seoul 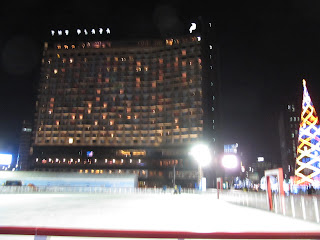 We spent all day on Friday deliberating what we should do with our Christmas Eve. Christmas in Korea is notorious for couples out on dates, overpriced drinks (from coffee to booze), and needing reservations to get into any decent restaurant, so we were a little stressed over what to do since we didn't want to face any of those things. This is actually my first Christmas in Korea. My first Christmas in Asia, I spent on a plane going to Vietnam, my second I was home for two months between contracts, so finally, another year has passed and I'm actually in Korea for Christmas (though I'm leaving tomorrow for Japan), but had no idea what to do. 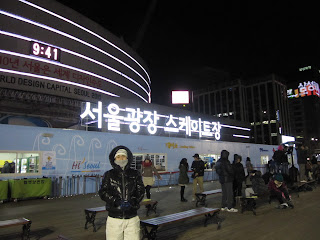 Finally, at 9:00 when I was leaving work, the boyfriend suggested we check out the ice skating at City Hall Plaza. While I've wanted to go for a while, the freezing temperatures yesterday made me feel a little uncertain about the event, but it sounded better than sitting at home on Christmas eve, so we met up at Sindang and headed to City Hall station.

They suggest that you make online reservations, but we didn't and we were fine. That probably wouldn't go for any holiday like Christmas eve, but I'm positive the cold temperatures kept a lot of people away. 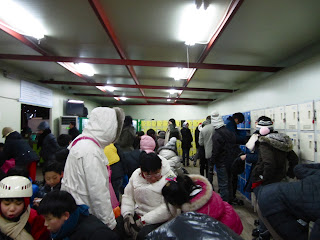 The price is only 1,000 won per person (0.86 cents USD by today's exchange rate) and that includes the skate rental. The skates weren't exactly high quality, but then again, what can you expect for 0.86 cents? 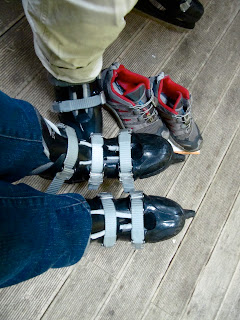 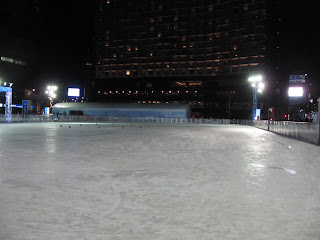 Finally it was time to get on the ice. Fortunately, I was not one of these people pictured below that were a bit scared to let go of the railing. I don't blame them too much though, I wouldn't want to learn how to skate for the first time in the crap skates they rent out either. 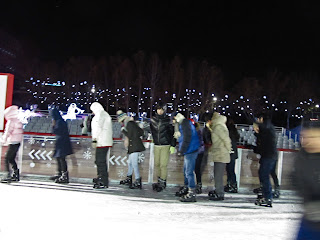 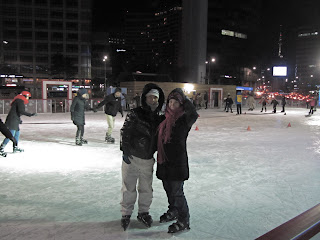 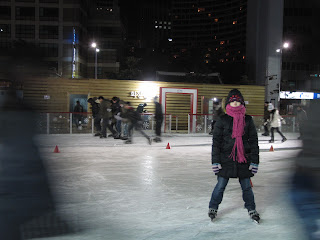 We skated for about 45 mins before we got cold and sick of feeling like hamsters running round and round the wheel without a purpose. After taking copious amounts of photos we got off the ice and started to deliberate what to do next. 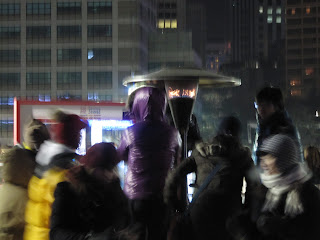 We tried warming up at one of these warming stations, but either I was so bundled up that I couldn't feel the heat or it was just so cold that this fire wasn't doing anything. I gave up standing there pretty quickly. 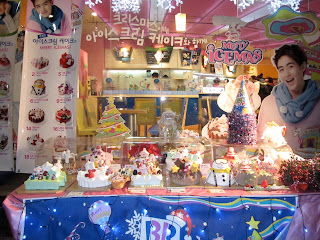 We decided to head to Noksapyong to Tony's Aussie Bar up the hill.  As we walked to the bus to get to Noksapyong, we passed Baskin Robbins selling ice cream cakes on this frigid night. In fact, I've been seeing huge cake displays outside of every bakery I've past in the past few days. Evidently, eating cake is a Christmas tradition in Korea. We didn't buy one. 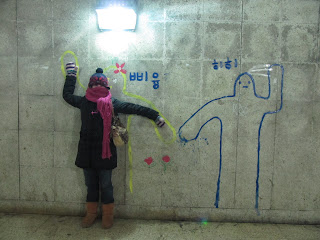 In the tunnel to cross the street near Haebangchon, we found this and thought it was amusing. 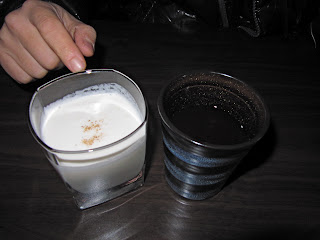 We haven't been to Tony's in a while because it seems that whenever we go lately, there's no seats left. The place is always packed. As we ran up the hill in the freezing cold and wind I was just imagining the same problem tonight. Full of Korean couples for Christmas eve (since most of the foreigners are out of town by now, or getting ready to get out if they're not already). But, I was delighted to find the place nearly empty except for two (Korean) couples. The winter drink menu was certainly an exciting one. Eggnog with rum and hot mulled wine. I ordered one of each!! 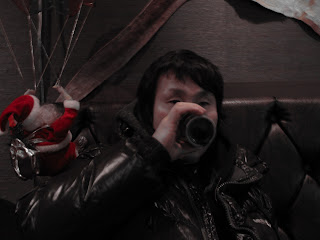 Of course, by the time we got there, the kitchen was already closed, so after hanging out for an hour or so, we decided to go back down the hill and check out some chicken we had seen roasting in the window of a little Korean as we had made our way up the hill to Tony's. 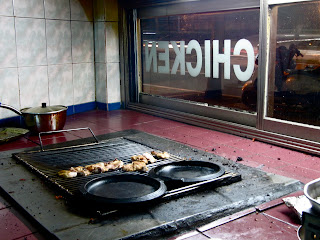 It was as delicious as it looked from the window. And they had a glorious space heater right next to our table. We stayed here another while, not looking forward to going back out into the cold. 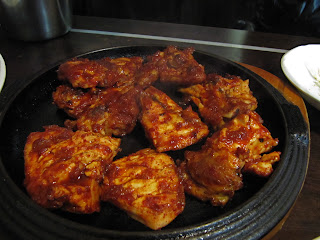 Finally, we went home around 1:30. It was a lovely night full of unexpected surprises. I hope everyone's Christmas is full of more wonderful surprises!
Posted by 조안나 at 3:11 PM