I'm taking a sick day today. I don't even know if I get sick days. But I have been feeling really awful. Yesterday I had a fever. I don't think I've had a fever since middle school. I didn't even remember what having a fever felt like. It was awful.  My asthma was kicking up all weekend. And my nose is running like a faucet. I won't describe the pile of tissues next to me that keeps growing as the day goes by. And my head just feels swollen and every time I move too fast I get dizzy and light headed. I went to the doctor this morning, of course by then my fever had broken and my asthma had died down. The doctor didn't look too concerned, but he didn't like the sound of my cough. I got a new cocktail of drugs, plus two inhalers (mine from the states was long expired and wasn't working so well anymore). With the two inhalers it became by far the most expencive drug store visit I've ever had, but, even still it was only 20,800 won. That would have been much more expencive in the states.

Then the boyfriend treated me to breakfast of juk, Korean rice porridge. I'm so lucky to have someone who takes care of me when I'm so far from home <3 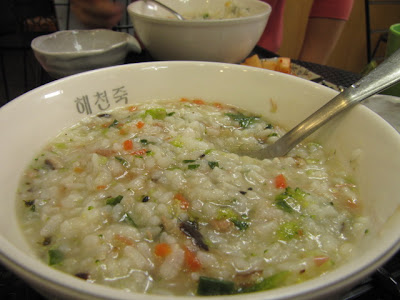