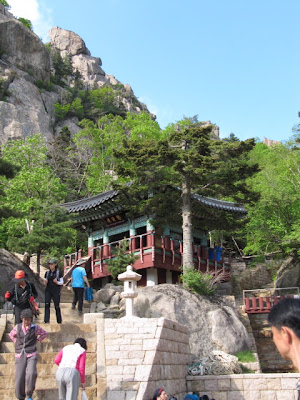 After our 7 hour hike up to Sochong Shelter we were in desperate need of nourishment in the form of warm food (not PB&J) and so we hiked down about a half an hour to 봉정암, Bongjongam, Korea's highest elevation temple. Not only does this temple have that pretty amazing little name to fame, but it is also home to a very sacred relic. A 사리 of the Buddha himself. 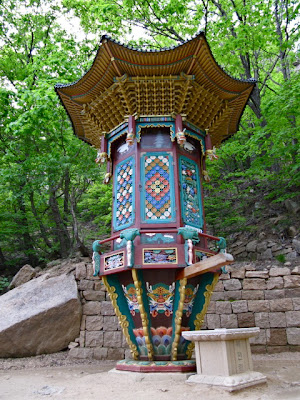 It's a beautiful temple and it has some spectacular views compared to your typical temple. 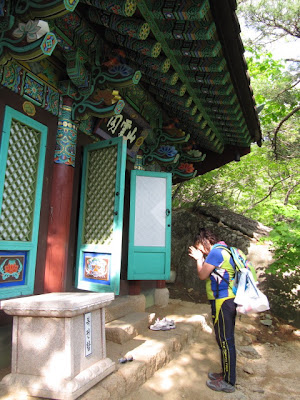 Below is the pagoda which houses the 사리 of Buddha. It seems to be the biggest attraction of the temple and while it's hard to see, people were continually piling more and more bags of rice when they made their way up to the pagoda to pray. 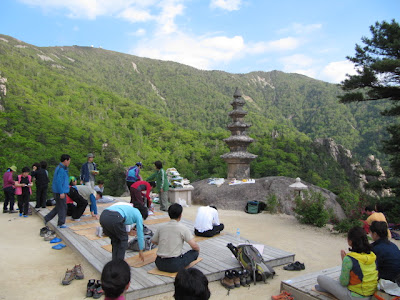 But, the real reason we came here was not the pagoda, even though it was quite cool. We came here to eat. They offer free meals every day, three times a day. All pure vegetarian food as you would expect from a temple. We hadn't really thought about WHAT they would serve and we hadn't really thought about the numbers of people that would be at the temple around dinnertime on a Sunday evening on a long weekend. We decided find the food line at about 5:20, as the dinner was scheduled to be served at 5:30, but we were shocked to see a horrendous line ahead of us. But, we figured we'd come this far, we might as well join the crowd and we stood in line. After we got in line, the line continued to grow until it started snaking into the woods and then curled back around and doubled back on itself and went back almost to the beginning of the line again. 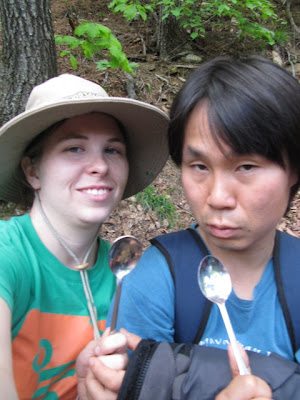 Spoons were passed around as we waited in line long after 5:30 had passed and we started wondering what we were going to get. Then, without warning the line started moving, and it moved unbelievably fast considering how many people were waiting in line. We couldn't imagine what they could be serving that they could hand it out so fast. Finally we realized how it ran so fast. The were only serving up Miyeokguk. 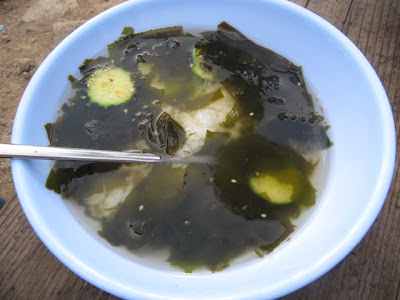 The bowl full of steaming hot seaweed soup and rice was literally tossed into our hands and we were pushed out of the way for the next person to get their food (explains why the line moved so fast). Then we sat down to eat. The Koreans were clearly prepared for such a simple meal because on all sides of me the Ajummas were pulling out lock & locks (Korean tupperware) full of panchan of all kinds. We were forced to suffer with our basic meal. After eating, we washed our dishes, then we filled up our water bottles at the fountain (because every temple has one fountain with drinking water) and stopped by a booth to buy some rice as an offering for our families. A quick prayer in the temple and then we were off back to our shelter for the night. 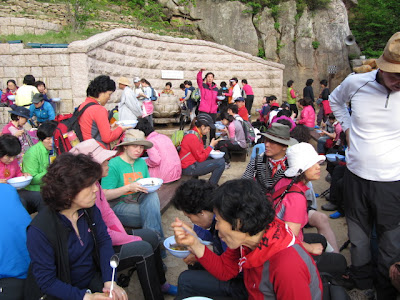 A foreigner in a sea of Koreans
While there are lots and lots of foreigners on Seoraksan, I didn't see a single one here at Bongjongam. I don't know why it's off the tourist radar, but I hope you make a stop here on your next trip to Seoraksan. It's a beautiful temple with a lot of significance.
Posted by 조안나 at 10:45 PM