My house in Georgia 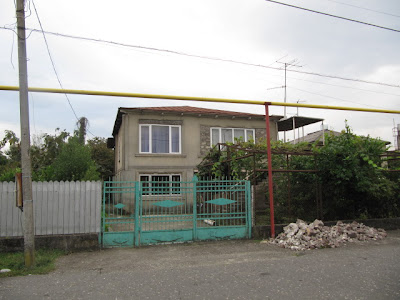 For those of you thinking of going to Georgia, I thought I'd post some photos from my home in Zugdidi, the capital of Samgrelo-Sventi region. My house is quite typical of many of the homes I've seen in this area. It's a two story house with an outdoor stairwell to the second floor. It has a small garden out front with a lemon tree and of course lots of grapes which I think pretty much every house in the country has standard growing in their front yard. There is a gate out front, of course, to keep out the animals, too. My family just moved into the house two years ago and they are still in the process of remodeling/ fixing up the house. 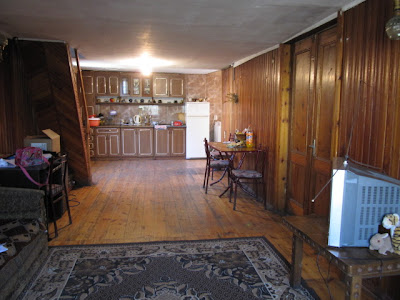 The above photo is our kitchen/dining/living room area. I don't have a close-up of the kitchen, but you can see it's fairly normal, with a refrigerator, sink, and washing machine. The one thing that it is conspicuously lacking, though is a stove. We cooked on either a gas canister on the floor or on the wood stove which they moved in once the weather started getting nippy. You can see them both in the photo below, gas canister on the left on the floor and of course, the wood stove on the right. This is quite typical in Georgian homes, though few people have some other modern conveniences like washing machines or refrigerators. 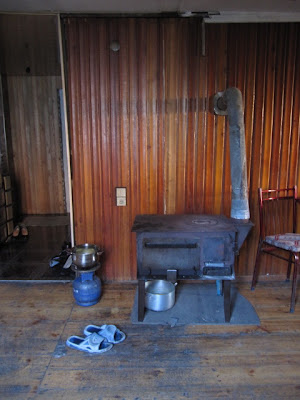 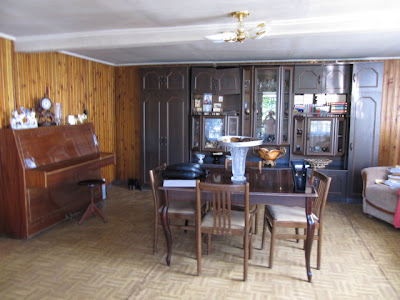 This is our dining room/entertaining room where we held most of our supras (feasts). The piano was a bit beat up and the keys were in a terrible state of repair and when the kids would mess around trying to play simple tunes I was sure that it was completely out of tune. It was not until we had a going away dinner when our school music teacher came over and started playing did I find out that it still works pretty darn well despite it's beat up appearance. The only bad thing about this room, and having supras in this room, is the fact that it's cut off from the main room where the heat is so it's always too chilly in this room. I guess that's why you're supposed to drink as much as you can at the feast, to keep warm! 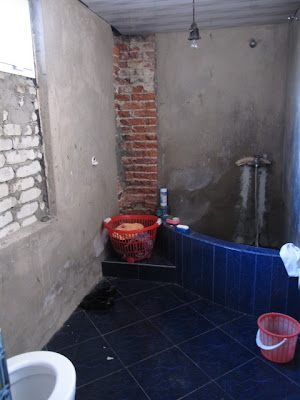 I was so relived to come to my house last October and find that, yes, I had an indoor bathroom... with a real toilet.. and a shower with hot water. As you can see, the bathroom is kind of under a constant state of construction, not unlike the rest of the house. My host family told me that my host father was a "craftsman" which later I came to find out that he remodles bathrooms for a living. Which is probably why my bathroom looks really nice... or what's been done so far. When they get some more money, they'll continue with the upgrades. 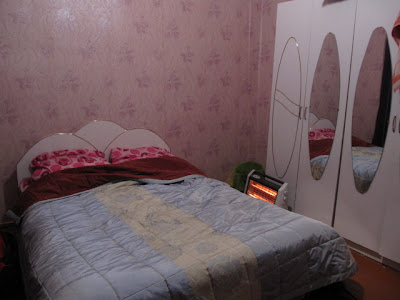 My room was definitely the best room in the house. All new wallpaper, wardrobes, a desk which you can't see and a nice bed too. You can see my electric heater on next to the bed as well, that's how I had to heat my room, though I wasn't allowed to leave it on at night. Also not pictured are the huge windows to the left of the bed with beautiful floor length curtains. I was so surprised to walk into my room the first night, I felt like I had won the lottery. I haven't heard of anyone having as nice of a room as me. 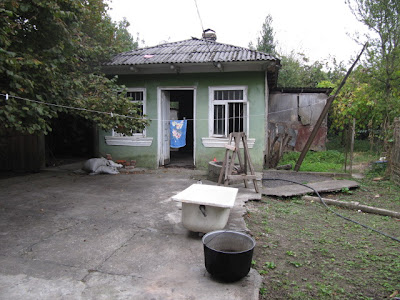 This is our backyard.  Inside the shed, there is a fireplace which they would use to cook extra large things that wouldn't fit on one small gas canister and needed more heat than the wood stove which cooks things too slowly sometimes. There is also a room just for preserves. My host mother wasn't big on baking and cooking per se, but she was a champion at canning and preserving. She made her own pickles, preserved fruit, jams, and a variety of sauces which would consist of most of our meals. She'd make up a huge batch of food on the fireplace, then put it in jars and put it out in the shed. Whenever we ran out of food, all you had to do was go out here and pick out whatever you wanted from the huge selection of stuff. 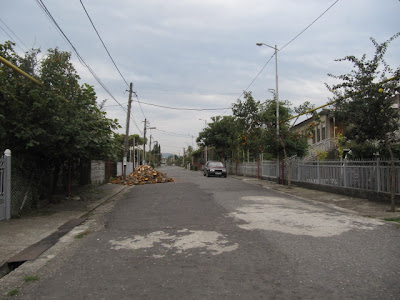 This was my street in Georgia. Nothing really worth mentioning except that if you notice the yellow pipes that run about 3 meters or so above the ground on either side of the street are gas lines. Never seen above ground gas lines before. My host mother dreams of getting her house connected to gas, but I think the hook-up fee runs around $1,000 USD if I understood correctly. That's more than the monthly income for the whole family. Not to mention the cost of buying new appliances that run on gas as well... 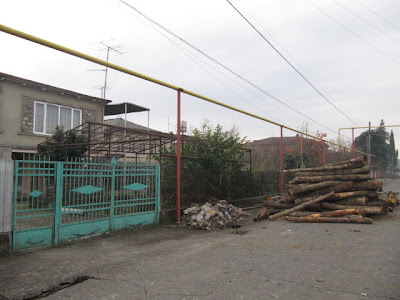 In this last photo, you can see a delivery of firewood that arrived from my host mother's parents who live in the village. There was a whole party of men who came by two weeks later with a chain saw to cut it all up and move it off the street and into the back yard. No one seems to mind that people store firewood in the middle of the street, or at least not on our small side street with little traffic.

I hope this gives you some idea of what my life was like this fall. Some families have very nice, modern houses, some families still live the village life with outhouses water heaters that require chopping wood and building a fire to use. My house I think was somewhere in between these two, but part of the experience of living in Georgia is living in a Georgian home and getting a good look into how another culture lives their daily life. I hope this is useful for those who are planning on going to Georgia!

Email ThisBlogThis!Share to TwitterShare to FacebookShare to Pinterest
Labels: Life in Georgia, Republic of Georgia