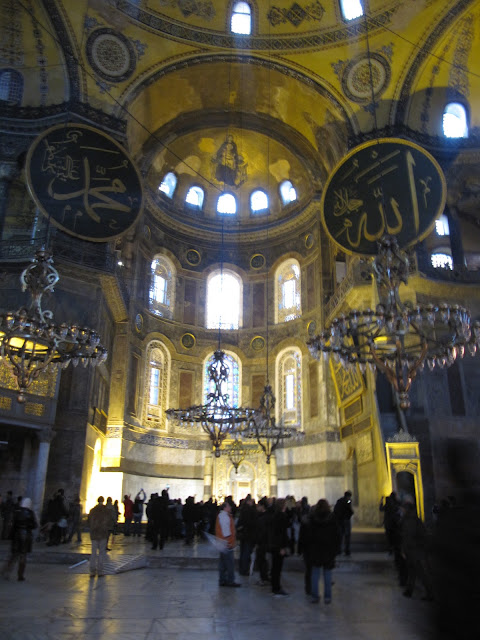 Before going to Istanbul I really didn't know much about the city, but I knew I had to see the Aya Sofia (Hagia Sofia). I think I remember it from my history class from high school as being known as the most beautiful building in the world or something like that. After visiting, I would say that it probably isn't the most beatuiful building in the world, but it is certainly worth checking out. 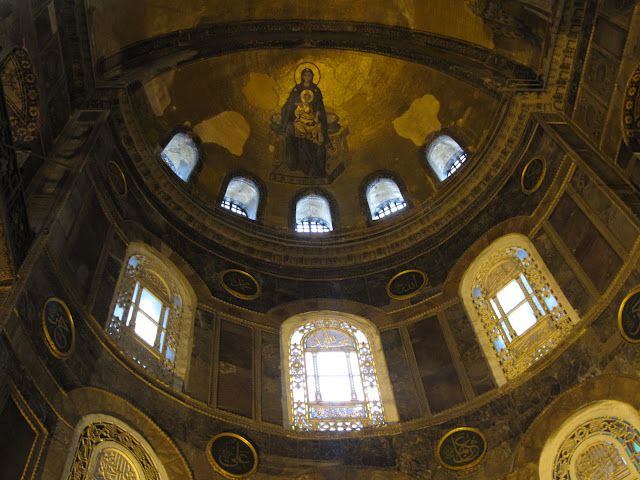 For those who don't know much about the Aya Sofia, it was the largest Cathedral in the world for about 1,000 years. The current structure was completed in 537 and served as the Greek Patriarchal Cathedral of Constantinople until the Ottomans took over the city in 1453 and converted it to a mosque. It is considered to be the epitome of Byzantine architecture and  served as a model for many later churches and mosques. 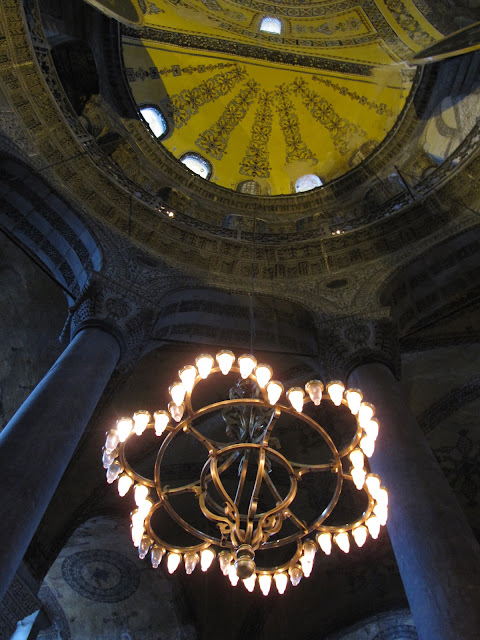 The main dome is massive and stands at an impressive 55.6 meters (182 ft). It's interesting to read the history of the church, various parts have been destroyed over the years, but they just kept rebuilding and improving the structure every time to make the building stronger and stronger. 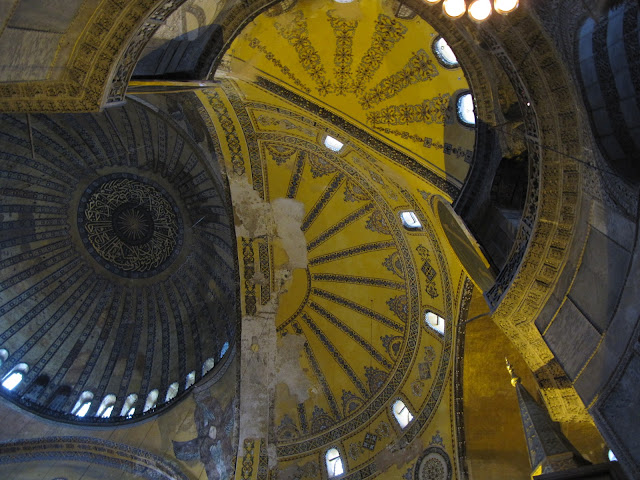 Today the Aya Sofia is now a museum so that Muslims and Christians alike can appreciate the history and beauty of the building. They have tried to keep a healthy balance of uncovering the Christian mosaics and frescos while preserving the Islamic art which covered much of the Christian images. 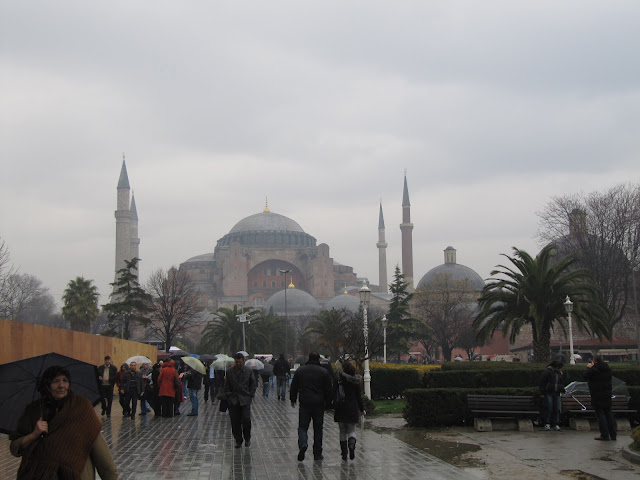 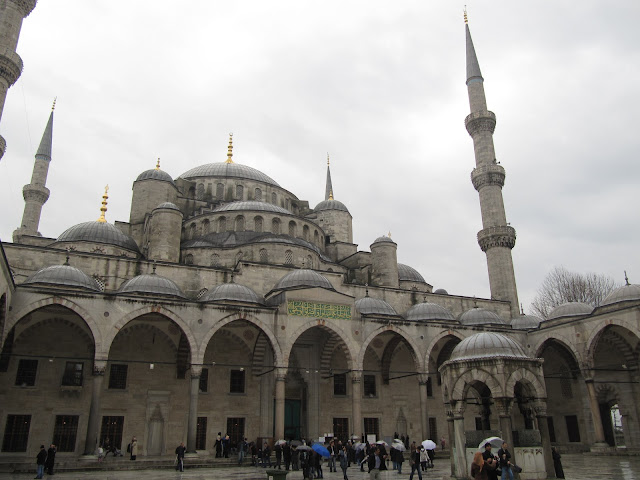 Unlike the Aya Sofia which has been convereted into a museum, the Blue Mosque is still a functioning mosque and therefore visitors must show a little respect when entering. Women should wear a head scarf, cover their legs and arms. Everyone must take of their shoes before entering. 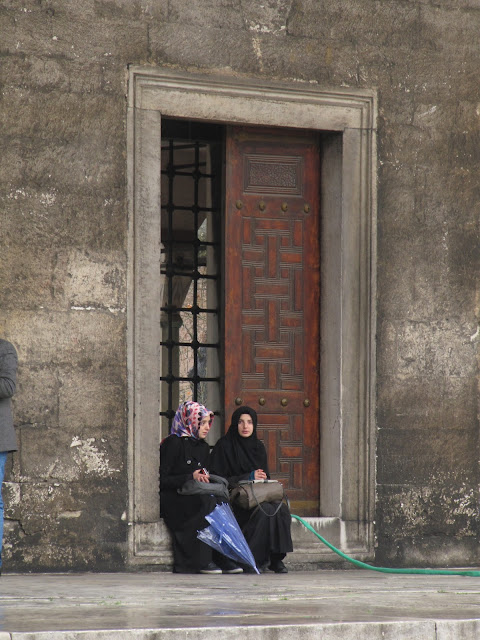 As I first learned while in Spain this summer, Islamic art is just stunning. While you will never see icons as you would in Catholic or Orthodox churches, the repeated patterns and the Arabic writing used to make designs is quite stunning. 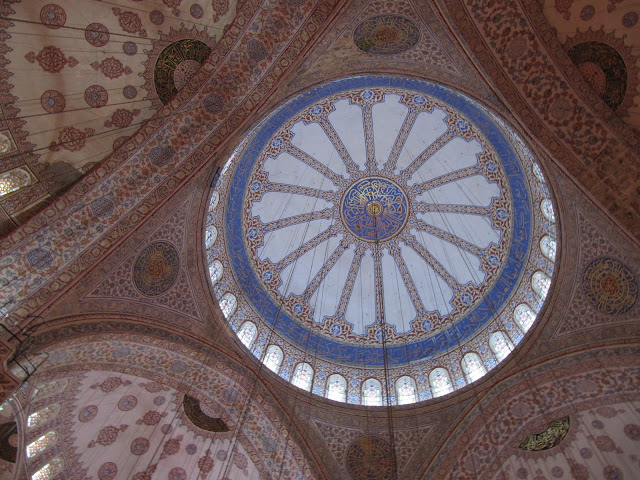 Many people argue that the Blue Mosque is even more beautiful than the Aya Sofia. For me, you can't compare them, they are like apples and oranges. But, they are both worth seeing while in Istanbul.

Admission into the Aya Sofia is 20 Lira, which was about $12.00 USD when I was there. Audio guides are available and there are many licensed guides milling about the entrance who also offer tours in many languages. It would have been nice to have a guide, but I just did it on my own and was happy enough. As the Blue Mosque is a functioning mosque, you should be wary not to enter during prayer times. Those times change every day, but are around sun rise, mid morning, noon, mid afternoon and evening. There is no charge to enter, but you must stay within one area for viewing if you are entering as a tourist, not a worshiper.
Posted by 조안나 at 11:00 AM