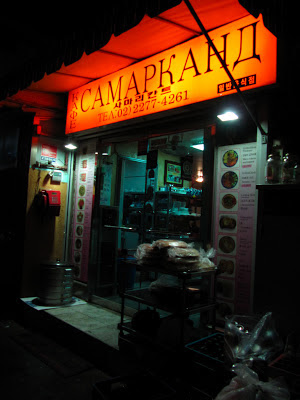 One of my favorite Friday or Saturday night hangouts is the 'Central Asian Town' just next to Dongdaemun. It's hard to believe that just by crossing the street from Good Morning City you can find yourself in a maze of restaurants and businesses where everything is written in Cyrillic letters. It's not just Russian restaurants to be found here, but Uzbek, Kazakh, Mongolian, and more. Last Friday night we came down here for an evening of good food and drinks and we tried Самарканд / 사마리칸트/ Samarkand Restaurant, a typical Uzbek restaurant in the area.

It's not a big place, but they were packed on a Friday evening, leaving just before we arrived were a group of English speaking westerners, the restaurant was full with both Koreans and Central Asians. And why not? Good food and good drinks at a reasonable price, especially, we've found vodka prices in this area to be 1/10th of the price of a typical Korean HOF. There is one brand of Russian beer which seems to be the most prevalent around Central Asia Town. There are various flavors and they are identified by their numbers. We got number 3 and were quite satisfied. 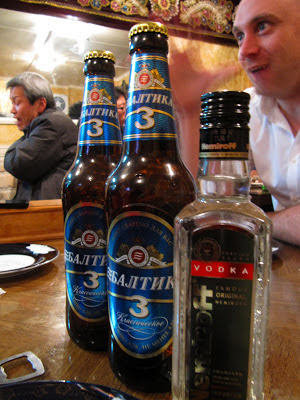 Whenever we come to places like this we always try to get a good, round sampling of the whole menu, and fortunately, since we were four hungry people, it wasn't a problem. First we went with two soups: borscht and lapsha. 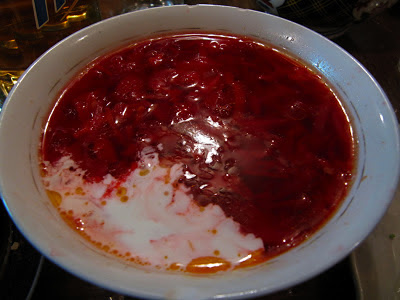 You've probably heard of Borscht. It's that famous Russian soup made with beets and other vegetables. The white is a dollop of sour cream. It's one of my favorite soups and hard to do wrong. 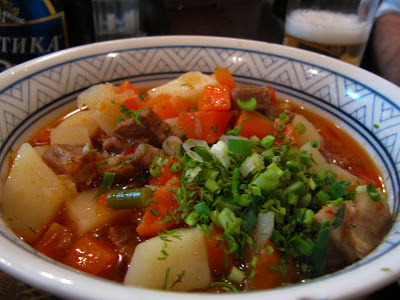 On the other hand, you may not have heard of lapsha. This is kind of a chicken noodle vegetable stew. Check out all those nice noodles in the photo below! This was also nice and tasty. Perfect for a winter's evening. 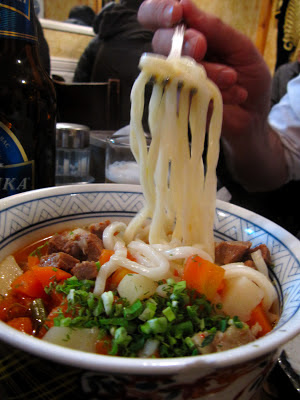 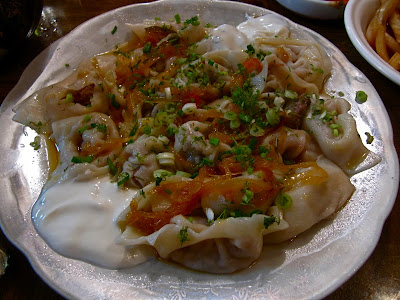 I was really excited for these pelmini. Pelmini are small dumplings that originate from Siberia, but are now enjoyed in many ex-soviet areas. They're topped with vegetables and dipped in sour cream... a must order! 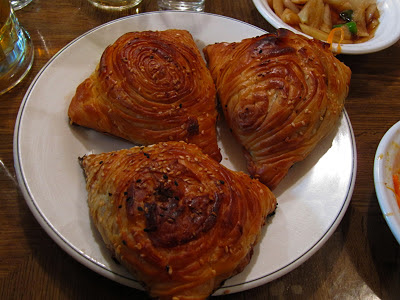 These look like dessert, but they are definitely not! These are called Samsa (also called Somsa), these are an Uzbek style meat filled pastry. Flaky on the outside, meaty on the inside, tasty all over. 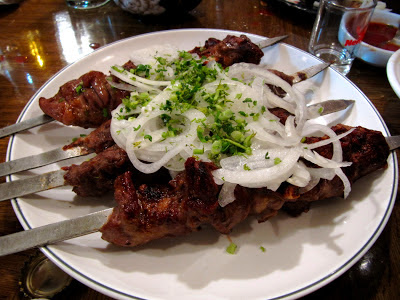 And what trip to Central Asia Town could be complete without an order of Shashlik? Shashlik has been a favorite of mine for a while, but after living in Georgia last year, eating this really brings back memories to wedding feasts where these were a staple. You can get them in any meat you like, from ground beef, chopped beef, lamb, chicken and pork. 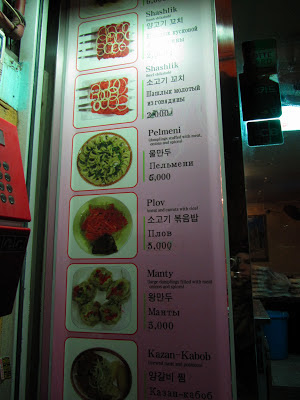 Central Asia town is a must visit. Find Uzbek restaurants, Mongolian restaurants, Russian restaurant, Kazakh restaurants and more! It can be a nice stop for lunch if you're shopping in Dongdaemun, or a destination for your Friday or Saturday night. There's even a fantastic Mongolian Karaoke! Just be a little more careful at night here, as it is slightly more dangerous than other areas of Seoul. Keep to the buddy system and you'll be fine.

To find Самарканд / 사마리칸트/ Samarkand Restaurant, take exit 5 from Dongdaemun History and Culture Park station. Turn right and cross the small street. Turn left and take the first small alley to your left. You will see Samarkand on your right just past 'My Friend and Ala-Too'.