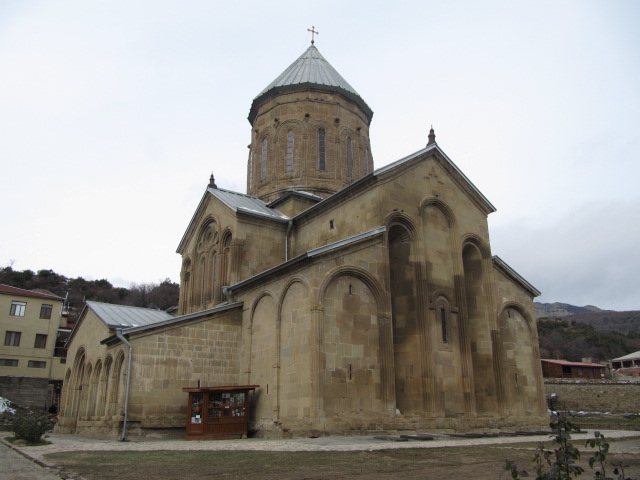 After my first bus ride to from Tbilisi to my city I swore I wouldn’t go back again until it was time to go back to America. Six torturous hours in an uncomfortable bus with poor ventilation made me think that there was nothing to see in Tbilisi that was worth doing that again. But since then of course, I have found better modes of transport and I’ve found myself in transit in Tbilisi 3 or 4 times since the beginning of November. While I’ve come to know the bus stations quite well because I’m always going from here to there passing through Tbilisi, I hadn’t gotten a chance to explore the city since my first week in Georgia during our orientation (and even then, I only got out into the city a few times for just a few hours).  Finally this weekend a chance to really see the city came up, my best travel mate was leaving for America. I spent the day with her and another friend exploring the city, got to say my goodbyes on Saturday night, then had one more day on Sunday to see even more. Taking night trains there and back maximized our time so we had two full days to explore.

First stop was actually to head out of Tbilisi, to the neighboring town of Mtskheta, the old capital of Georiga. Now it’s just a small pleasant city with lots of important churches. We didn’t have time to get into the mountains to find the most famous churches and monasteries, but we got to see two major sights in town, Samtavro church and Svetitskhoveli Cathedral. 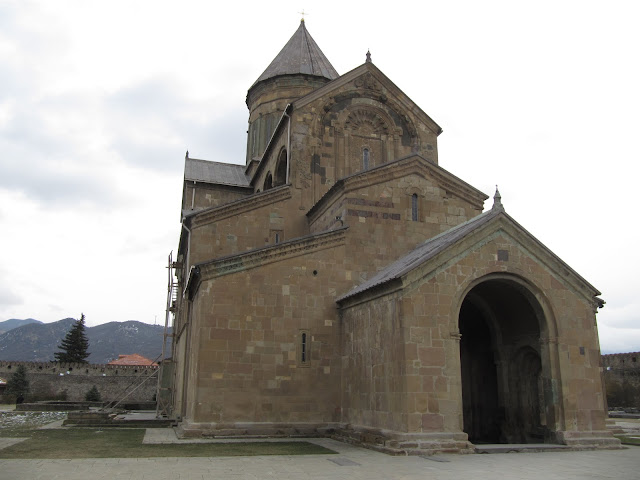 Svetitskhoveli Cathedral was the most important cathedral in Georgia during medieval times and several kings and church patriarchs have been buried here. Beautiful, original murals in here date back to the 17th century. 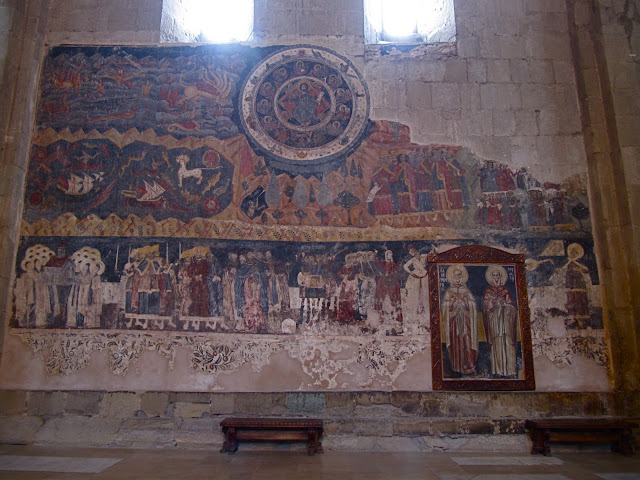 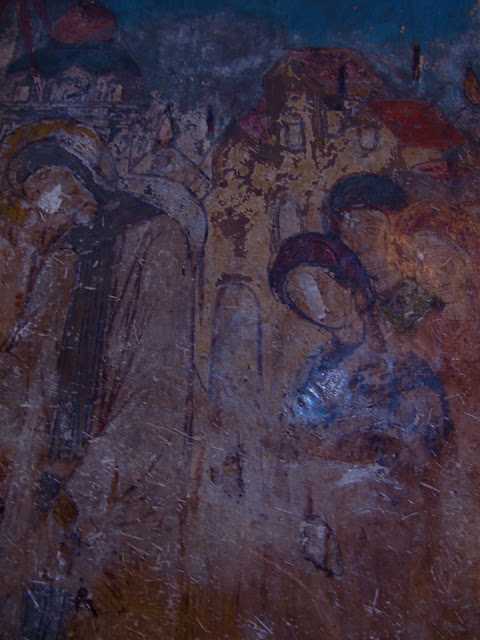 After roaming around Mtskheta for about 2 hours hitting up these two churches and all the souvenir stands picking up Christmas presents to bring home, we headed back to Tbilisi without any problems. 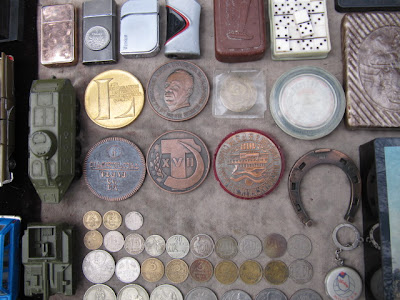 From there we went back to the Dry Bridge Market, the first place I discovered by accident in Tbilisi back after I first arrived. We all did a little shopping here, there are so many great things to buy here. 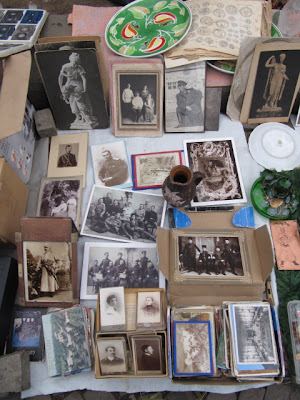 Next it was time for lunch. Unfortunately, in Georgia, it can be hard to find a big variety of cheap eats. Generally we wind up eating some form of Khachapuri (bread with cheese) or Lobiani (bread with beans) because these are the cheapest. The selection of Khachapuris and Lobianis depend on the city and the restaurant, but here we found something we’d never tried before, Khachapuri with boiled egg inside. We were happy with the results and three of these plus three teas came to a grand total of 10 Lari ($7 USD). 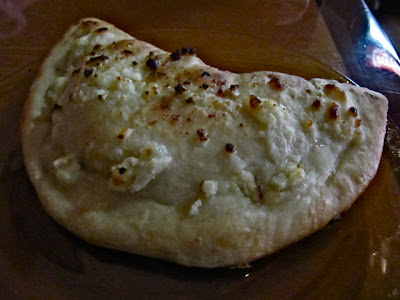 From there it was on to Sameba, the biggest and newest cathedral in Georgia. Construction finished in just 2004, it is absolutely massive and can be spotted from afar from most places in the city. While this church is quite impressive to look at from the outside, inside it lacks the charm of the older churches and their beautiful old murals. Walls inside are mostly bare except for the various icons hanging on the walls. 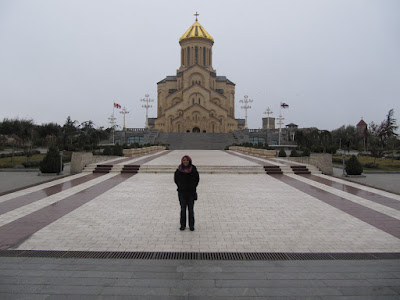 Me at Sameba Cathedral

After that, we spent some time with some friends of friends and then headed off for dinner. I hoped to find a place that had Georgian dancing for my buddy’s last night in Georgia, but we were unsuccessful. But, we did wind up with a nice (expensive) meal of Khinkali (Georgian dumplings) with salad and cheese in a fancy restaurant on the outskirts of town.

The next morning we leisurely got up and out of our hostel and headed to Narikala fortress. It was fun to climb the ruins of the fortress up to the top for the spectacular, bird’s eye view of the city. 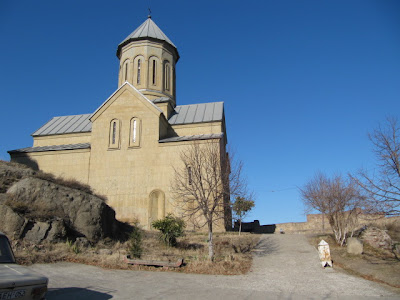 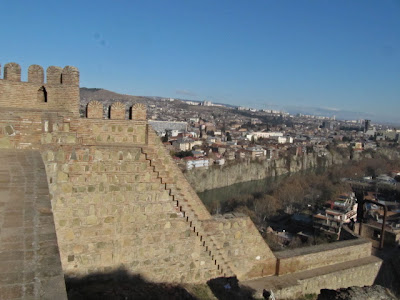 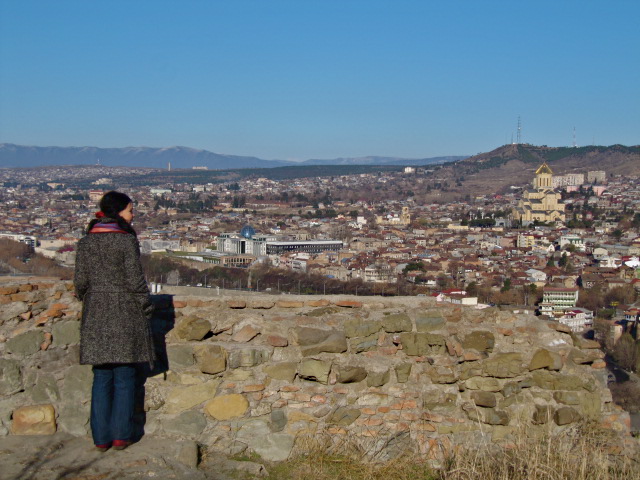 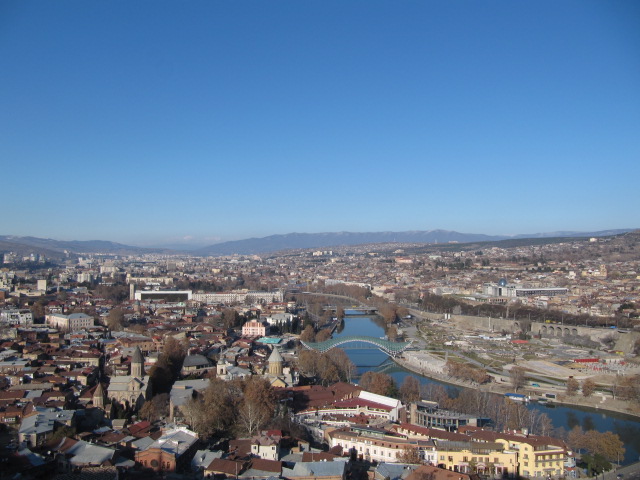 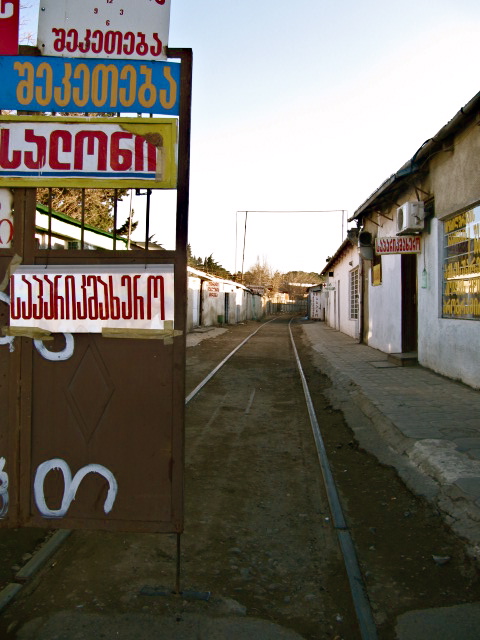 Side street near Didube Station

From there we headed to the market near Didube station to buy some Chorchkhela (grape and nut thing that is hard to understand until you see and taste it) for gifts. The market is fun to walk through, there’s lots to see, it’s not a touristy place at all. It really shocked some friends of mine who aren’t used to seeing markets where they come from. I’m used to it from living in Hwanghak-dong in Seoul. 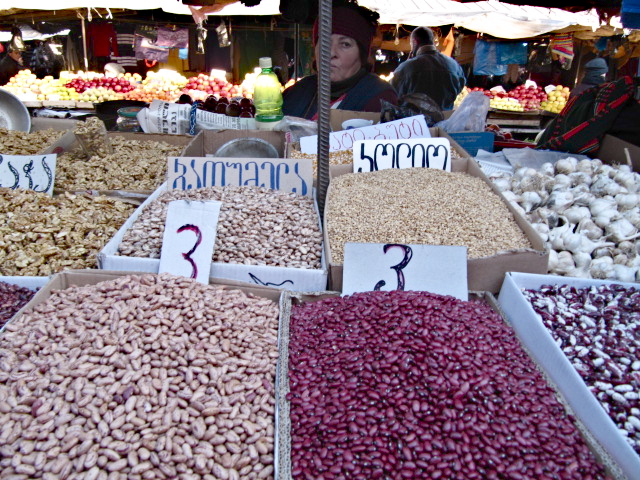 In the market at Didube Station 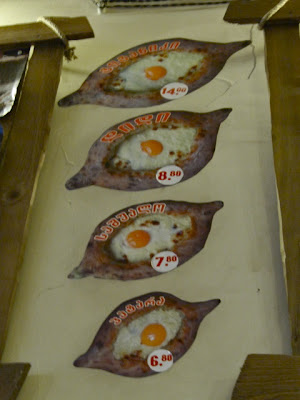 
Dinner was something I’ve been wanting to eat for a month. Adjaruli Khachapuri, which I personally like to call "boat Khajapuri". Traditionally it is served with cheese, egg and butter, but we tried another variation too, filled with cheese and vegetables. Really, this is the ‘small’ size for 6.80 Lari, but I think this could easily fill two hungry people. I don’t want to think how big the  ‘medium’, ‘large’ and ‘Titanic’ sizes would be… 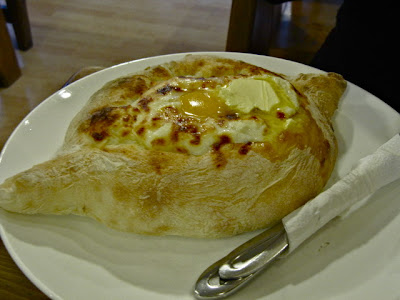 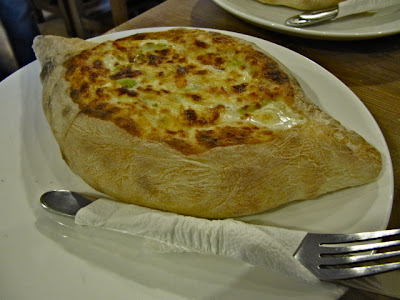 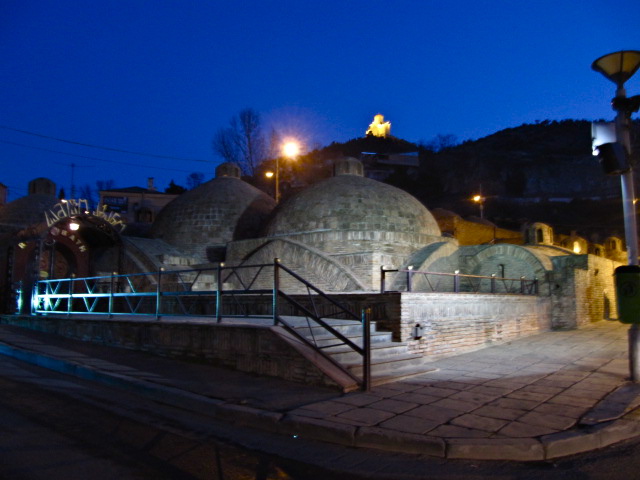 The expensive sulfur baths, from outside

Last stop for the night was the sulfur baths. I love going to the jjimjilbangs in Korea and I was hoping for a similar experience. There were two options. Paying (relatively) lots of money for a private bath, or going to the public bath for 2 lari. Just like in Korea you must take off all your clothes to go in, but unlike Korea, there's no baths in this bathhouse, just showers and a sauna (as far as I could find at least...) 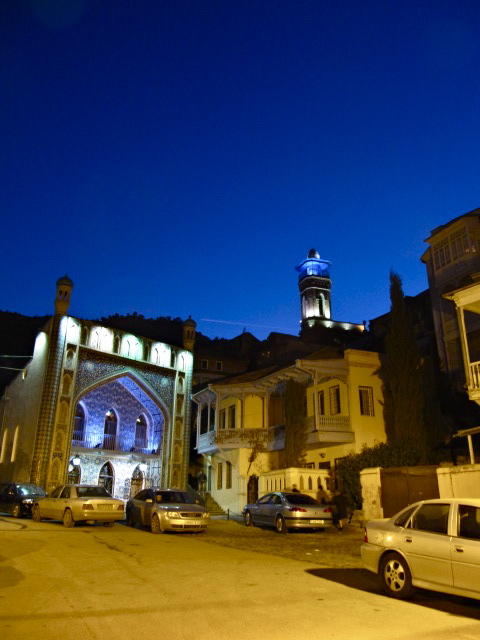 After this, we were finished and we headed back to the train station to go back to our city. But, Tbilisi is a great place to wonder around and I look forward to my next chance to wander the city streets.
Posted by 조안나 at 10:09 PM

Email ThisBlogThis!Share to TwitterShare to FacebookShare to Pinterest
Labels: Georgia: Things to do, Life in Georgia, Republic of Georgia