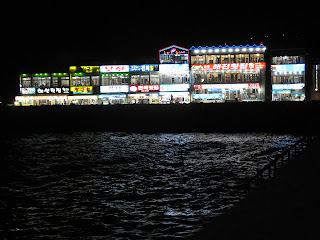 One thing you'll notice in Jeju about the food is that it's all about the seafood. There aren't many non-seafood options, except for 흑돼지 but that's a discussion for later. For seafood lovers, you'll be in heaven. For seafood haters, Jeju could be a food hell, making finding meals a very strenuous experience. I'm not a big fan of seafood, generally speaking. Small amounts are good, but I reach a limit and then my body refuses to take another bite. If I have to pick some seafood, it's probably going to be fish. I usually enjoy sashimi, or in Korea what is known as 회, or raw fish. 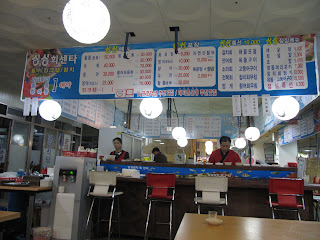 After our hike to Hallasan, we went to 동문시장 (Dongmun Market) in Jeju City for our first real meal in Jeju. There weren't a lot of places open due to the Chuseok holiday, but we found one decent looking restaurant and took a seat. We weren't sure what to order, so we went with set that was basically a little of everything. Also one of the most expencive things on the menu. As with everything in Korea, first came out all the 반잔, or side dishes. 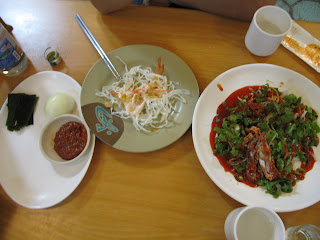 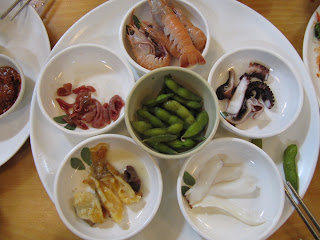 Lots of random things here, but I love the edamame in the middle. Other things included prawns, octopus, squid, and that strange pink looking one on the left is 개불, which is often referred to by foreigners as the penis fish due to it's appearance when alive... Yes, I ate that one. It tastes ok but nothing special. 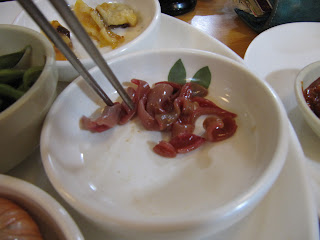 Close up of the 개불, the penis fish.

While waiting for our main dish, the boyfriend couldn't help but order Hallasan Soju, since we had climbed Hallasan before coming to the restaurant.... You'll notice that it's a little different from your average soju since it comes in a clear bottle as opposed to a green one. 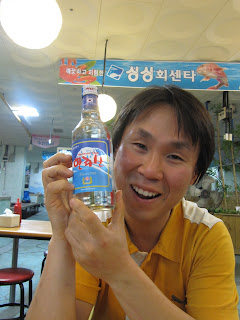 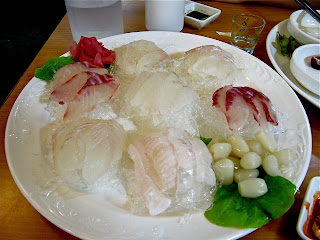 Lots and lots of raw fish. It was all quite yummy!
But! That's not the end! There's always more! After we finished our hwei we requested our 매운탕 (mea-un-tang) be sent out. It's a stew made from the leftovers of the fish that we ate. Lots of fish heads, bones and strange other things to be found in this soup. I usually just stick with the broth with this one and let the boyfriend have a field day with all the meat inside. 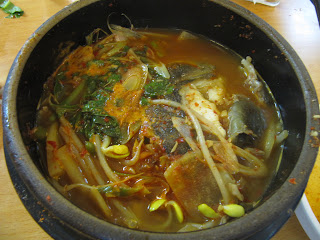 Oh, and let's not forget this guy that came out at some point or other: 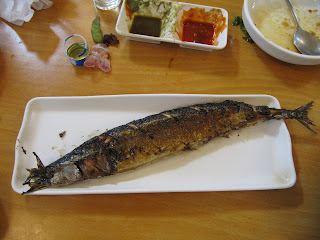 I've actually grown to like these things... as long as I can get bites without bones in it.... 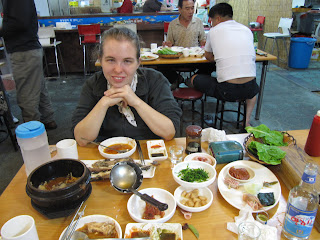 Me, as we were finishing our meal.

Anyway, when you go to Jeju, make sure you have a meal like this at least once. 횟집 (hweichip), or raw fish houses are everywhere. This meal was a normal priced, 30,000 won, but you can get a decent meal for a little less depending on what kind of fish you order. Don't forget, rice and soju are extra!
Posted by 조안나 at 9:21 AM