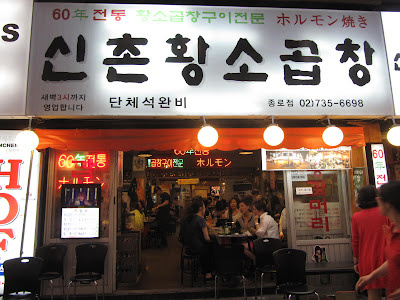 My my, it's been such a long time now since I left Seoul, but now that I have a little time, I'm going through some old posts I had planned and never got to write. Here is one about eating 곱창 (gopchang/intestines) at 신촌황소곱창 in Jongno. I have had gopchang several times before, but usually in Hwanghakdong where the most popular variety seems to be 양념곱창, a rather sticky sweet and spicy form of the gopchang, which I must say was pretty good as far as intestines go. However, one commenter, the author of The Seoul Patch blog mentioned, and I quote:

"Technically, what you ate was gopchang. However, that gunk with the ddok, gochujang and sesame seeds on it is to gopchang as a Mickey D's burger patty is to a sirloin steak. I'm far from an expert, but I want to suggest you try again, and stay away from pojangmacha for it. Really, if you liked that okay, you'll love the unadorned item, cooked on the table grill, with other organ meat like liver and kidney, and onion, garlic and potato slices as well. Delicious!"

I always wondered about the validity of this statement after I read that, but never really was daring enough to try again until about a week before I left Korea. A friend of mine invited me out for dinner with her friend and they had already made plans to come to 신촌황소곱창. They asked me if it was ok, though I couldn't really have said no, even if I had wanted to... 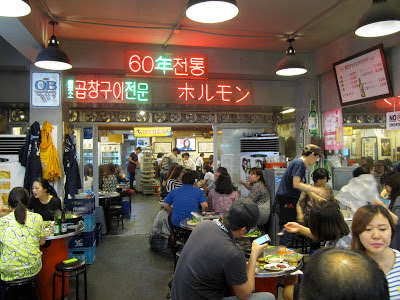 We arrived here and were escorted to one of the only empty tables left available. Apparently this is a really popular joint for intestines consumption and they claim to be a 60-year old restaurant. However, it also seems to be a local chain, so it's hard to say how long this particular establishment has been around... 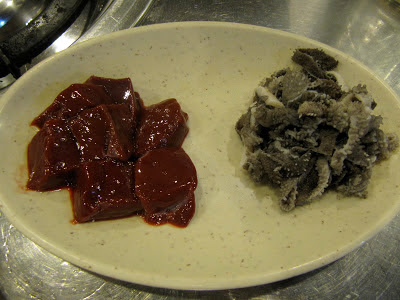 I let my friend order, since I'm clearly clueless about this particular cuisine. While waiting for our gopchang, out came a very interesting side dish: Liver (간) and tripe (천엽). While it wasn't terrible, it is certainly not something that I would order every day. 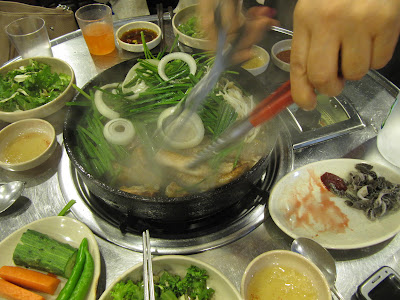 Next, they brought over our main meal beef gopchang with onions and green onions. The woman grilled it up for us on the table in front of us. I don't know why, but the thought of eating gopchang scares me a little, but I toughed it out, and, you know what? It wasn't bad. 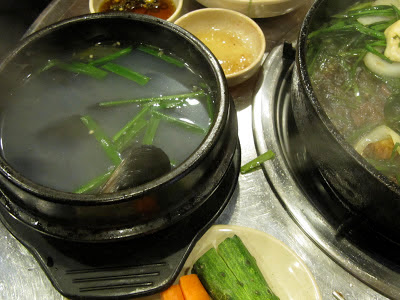 This was certainly a dinner of new foods for me. They brought over another side dish of mussel soup. My friend laughed at me because I didn't know the difference between oyster and mussel. Apparently oyster shells are very bumpy and mussel shells are very smooth and black. I'm so clueless about seafood.. As usual, once we had eaten most of our meal, they then brought over the bap for some bokkum. Now who doesn't love a little bokkum bap, right? 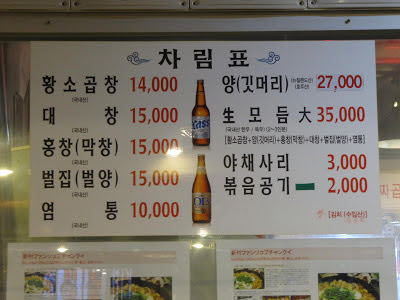 신촌황소곱창 -Jongno branch is located in the Jongno nightlife area between Jonggak station and Jongno-3-ga station. From Jonggak station exit 4, turn left into the first street on right. Turn left on Samil-daero-7-gil. The restaurant will be on your right.


View 신촌황소곱창 in a larger map
Posted by 조안나 at 2:05 AM 0 comments 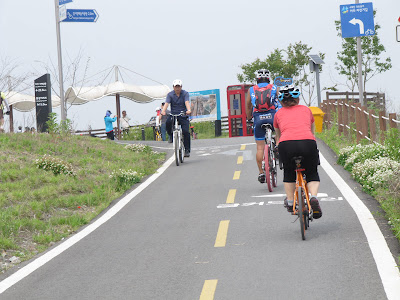 Entry point to the Ara Canal

Last fall we rode our bikes from our house to the start of the Ara Canal, which connects the Han river to the ocean in Incheon. Finally, we got to do the second half of that trip in May. Starting from Yeoido station, we followed the Han River to the Ara canal and then made the 21 mile trek to the ocean in Incheon. We were pleasantly surprised how nice the ride was, however we do wonder what good the canal does (besides provide us a fantastic bike ride) since the only boat that seem to use it is the Ara canal tour boat. 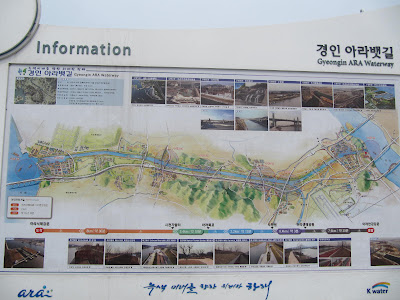 Map of the 21km Ara Canal

If 21 km sounds intimidating, it shouldn't. It's about a 1 hr and 30 min bike ride and, since it follows the river, is completely flat. The canal was built recently, finished about two years ago, meaning that all the paths are new and in great condition! I recommend riding on the north side of the river, as there are way fewer bikes and people over there. We, however, rode on the south side, so at times it did feel a little cramped on a weekend afternoon. 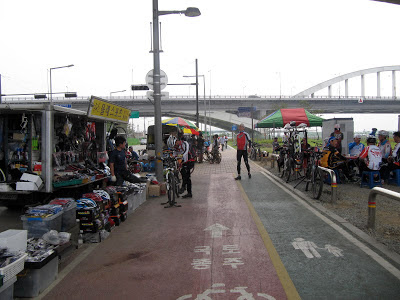 Bike supply pop up shops along the canal 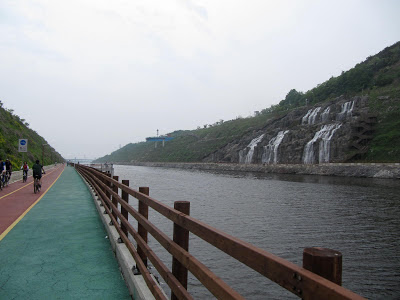 Waterfall halfway along the Ara canal

There are a few sights to see along the way. one of them was this waterfall, about halfway through the canal. Another are the windmills at the end of the trail. The windmill at the end is located at the park at the Ara west sea lock. 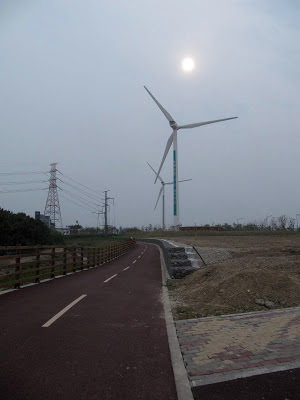 Don't forget to bring your 4 Rivers Passport with you when you ride, you can get stamps at the beginning and end of the Canal! Look for the sign below which indicates that a stamp center (they call it a "certification center") is approaching. 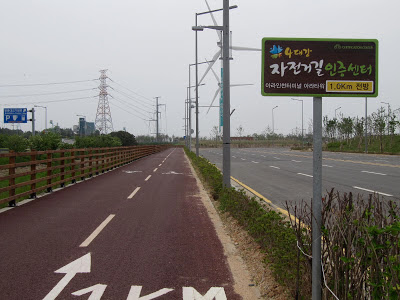 The only problem here, is that there is no public transportation from the Ara park. To take the subway back to Seoul, you'll have to go back to Geomam Station, a full 6 km back along the canal. OR you could just ride your bike all the way home!
Posted by 조안나 at 3:26 AM 1 comments

While Facebook's newsfeed is filled with stories of a Hyperloop bullet train which is years away from being used by real people, Korea has recently just launched it's own form of electric public transportation. Two buses which are charged wirelessly at bus stops and parking garages have been launched in Gumi for testing until December.


The main characteristic of the bus is that the vehicle uses electricity converted from magnetic force supplied by rechargers embedded in the roads at bus stops and parking lots. Using a smaller battery due to its real-time recharging, the vehicle is comparably light. It can also operate on regular roads. (Korea.net)

If this bus is successful, knowing Korea, we could be seeing it on the streets of Seoul and other major cities within a few years. Imagine how much less pollution and fuel would be used if every bus in Seoul ran on this? And who knows? Why stop at buses? Perhaps someday this could even be converted into car technology!

Email ThisBlogThis!Share to TwitterShare to FacebookShare to Pinterest
Labels: Technology

Getting my MA TESOL 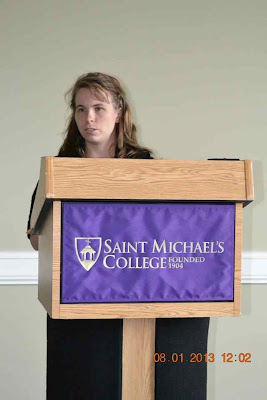 It has been one very long year, but I can now proudly say that I am now a proud owner of an MA TESOL (Teaching English to Speakers of Other Languages) from St. Michael's College in Vermont. I was one of three students in their pilot program which combines a mix of on-campus classes during the summer with on-line courses during the fall and spring semesters totaling 36 credits without teaching licensure (not necessary if you don't plan on teaching K-12 in the US or international schools).

Why choose St. Michael's? Well, besides the fact that it was my alma mater, it really was the best option for me. I didn't want a degree which was 'on-line', as many employers shy away from these kinds of degrees, but I wanted a degree from an English speaking country, didn't want to quit my job in Korea, and didn't want to go in debt again. Miraculously, I was able to do all of that through this program.

Last summer I was able to take time off from work (impossible with many jobs, I know) to take a 6-week summer semester on campus of 12 credits. It was intense, but since I didn't have to worry about working at the same time, it was very reasonable. Then in the fall and spring semester, I took one 4 credit course on-line for each semester while working full time. For the most part, this was very doable, with just an occasional stressful week here and there when big projects were due. This summer, between one 5-week on-line course in early summer and another 6-week 12 credit summer session on campus I was finally able to graduate on August 1st with my MA TESOL.

The grand total cost of the courses was just over $20,000, factoring in plane tickets, rent and food for the summer, the cost was probably around $23,00-24,000 for me to attend this program. I was able to do this completely debt free as I had a bit of money saved up after finishing paying off my undergrad loans several years ago, plus being able to continue working full time while taking classes let me earn another year's worth of salary before returning for my second semester on campus.

Was it worth it? Well, that is still to be determined, but I am hoping to be better qualified for jobs, particularly for teaching university here in Korea or in other countries. I am going to be looking for university teaching jobs in Seoul starting in the spring semester of 2014. I don't know yet if I will be able to find one, but I am hoping that the MA TESOL should let me stand out from the hoards of applicants which apply for these jobs. If anyone of my readers out there happen to know of anyone hiring, please let me know!

I have just two weeks left in the States, then I'll be back to Korea with a lot of excitement with a wedding and honeymoon coming up very soon. I'd like to say that I'll be blogging more now, but unfortunately I can't promise that for a little while longer. Who knows, I hope I find the time and motivation to blog sooner rather than later!

For those interested in studying at St. Michael's, please see their website: http://www.smcvt.edu/Graduate-Programs/Academic-Programs/Teaching-English-to-Speakers-of-Other-Languages.aspx
Posted by 조안나 at 12:31 PM 0 comments