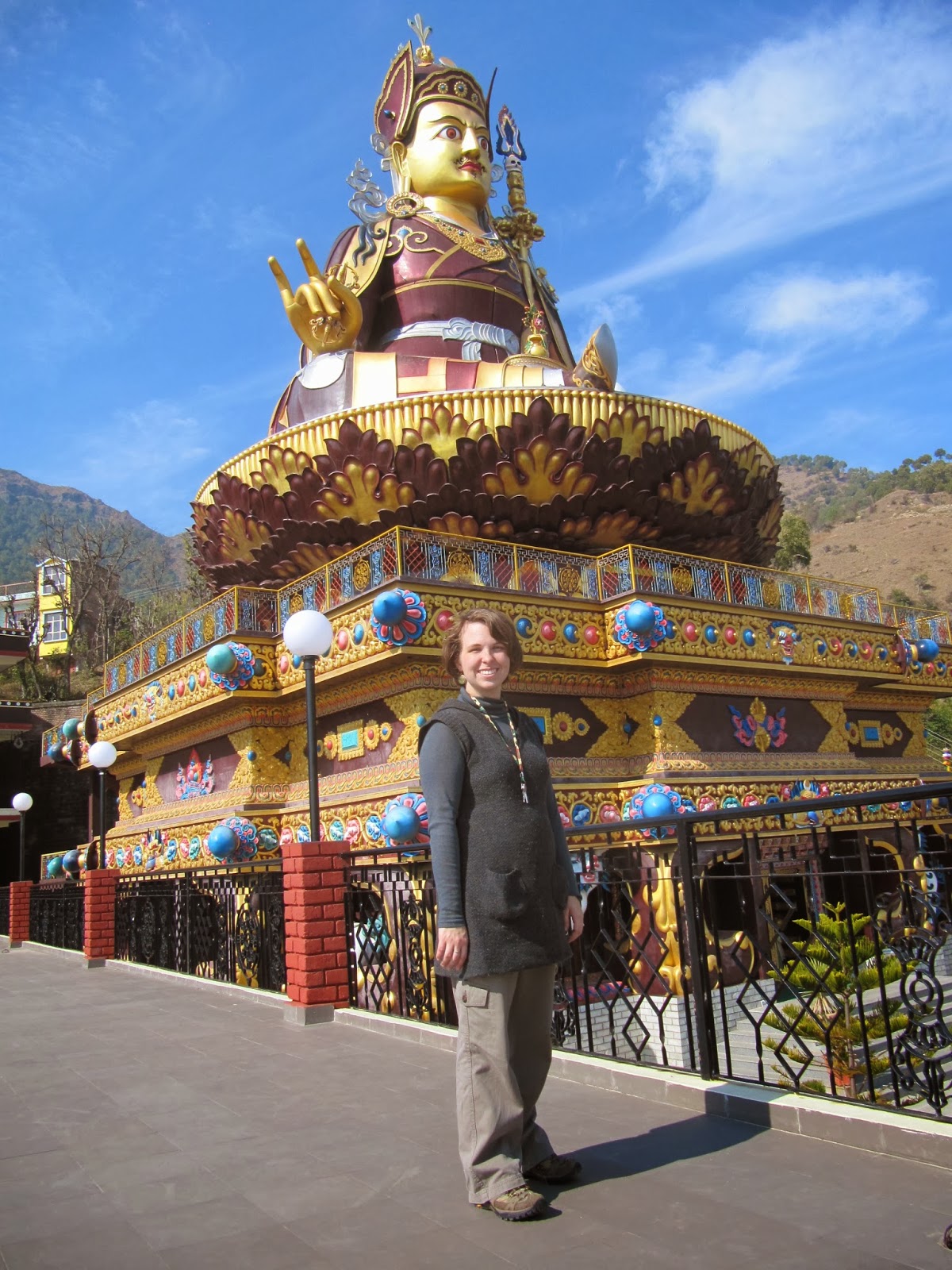 After our expedition to the caves, we headed over to the town of Tso Pema to continue our exploration of this holy town. Our first stop was Zigar Drukpa Kagyud Monastery. This is a new temple dedicated to Padmasambhava. The big guy behind me in the photo, is of course Padmasambhava, which as I mentioned in my last post is considered a second Buddha.This giant statue is quite new, it was just completed in 2011. 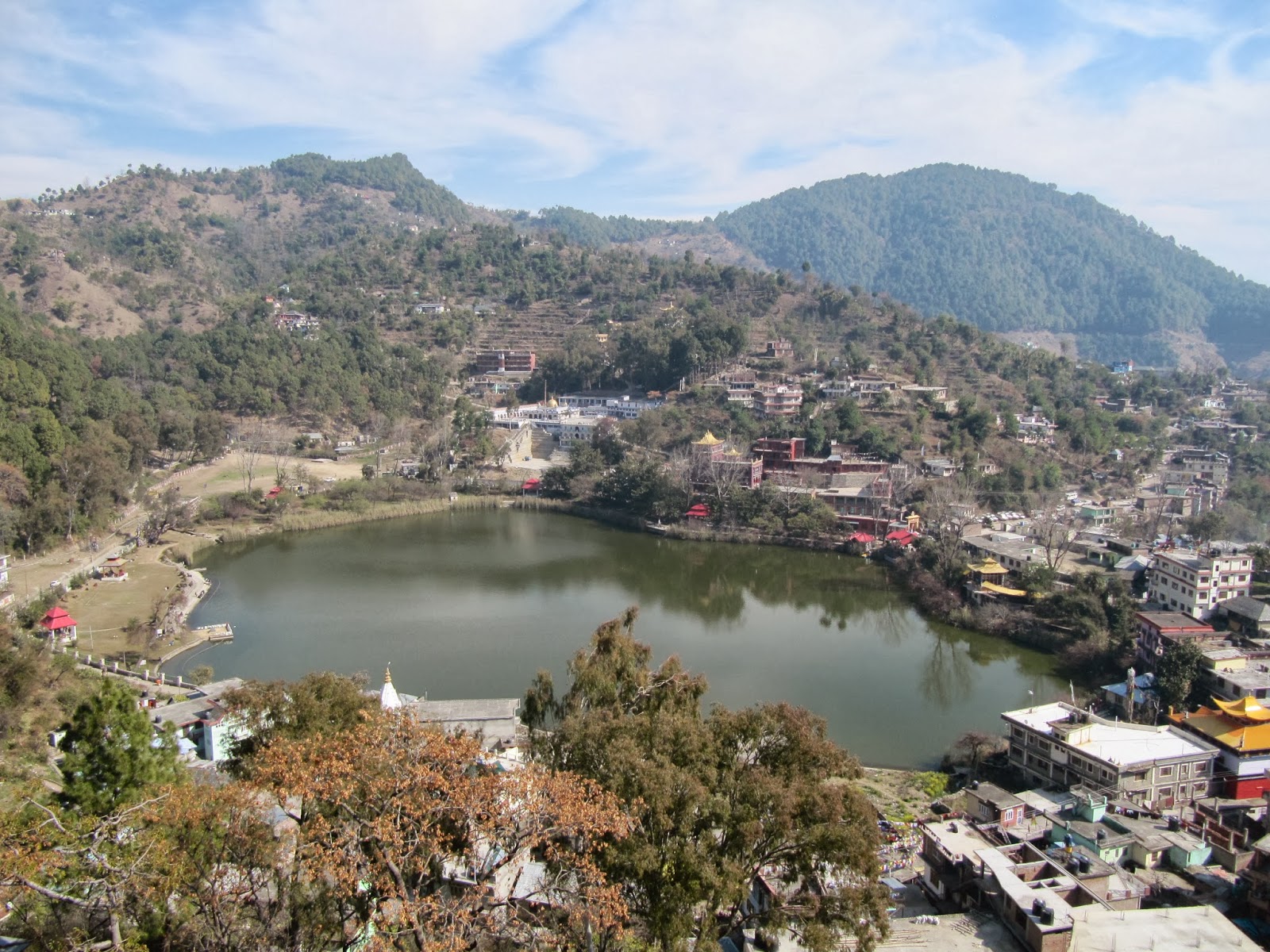 The temple overelooks the lake, Tso Pema, where Padmasambhava supposedly was reborn in a lotus flower (Tso- Lake, Pema- Lotus). The lake is quite small, it takes just 10-15 minutes to circumambulate.

Circumambulate, by the way, was a word I've had to learn here living with Tibetans (Kora in Tibetan), which means to walk around a temple or holy place in a clockwise motion, something which is always done whenever possible. We generally walk around our temple after meals as a general sort of habit. Someone suggested to us that we circumambulate the lake in Tso Pema fifteen times. However, we actually did it just twice, mostly incidentally because we were walking around the town and trying to visit all the temples. 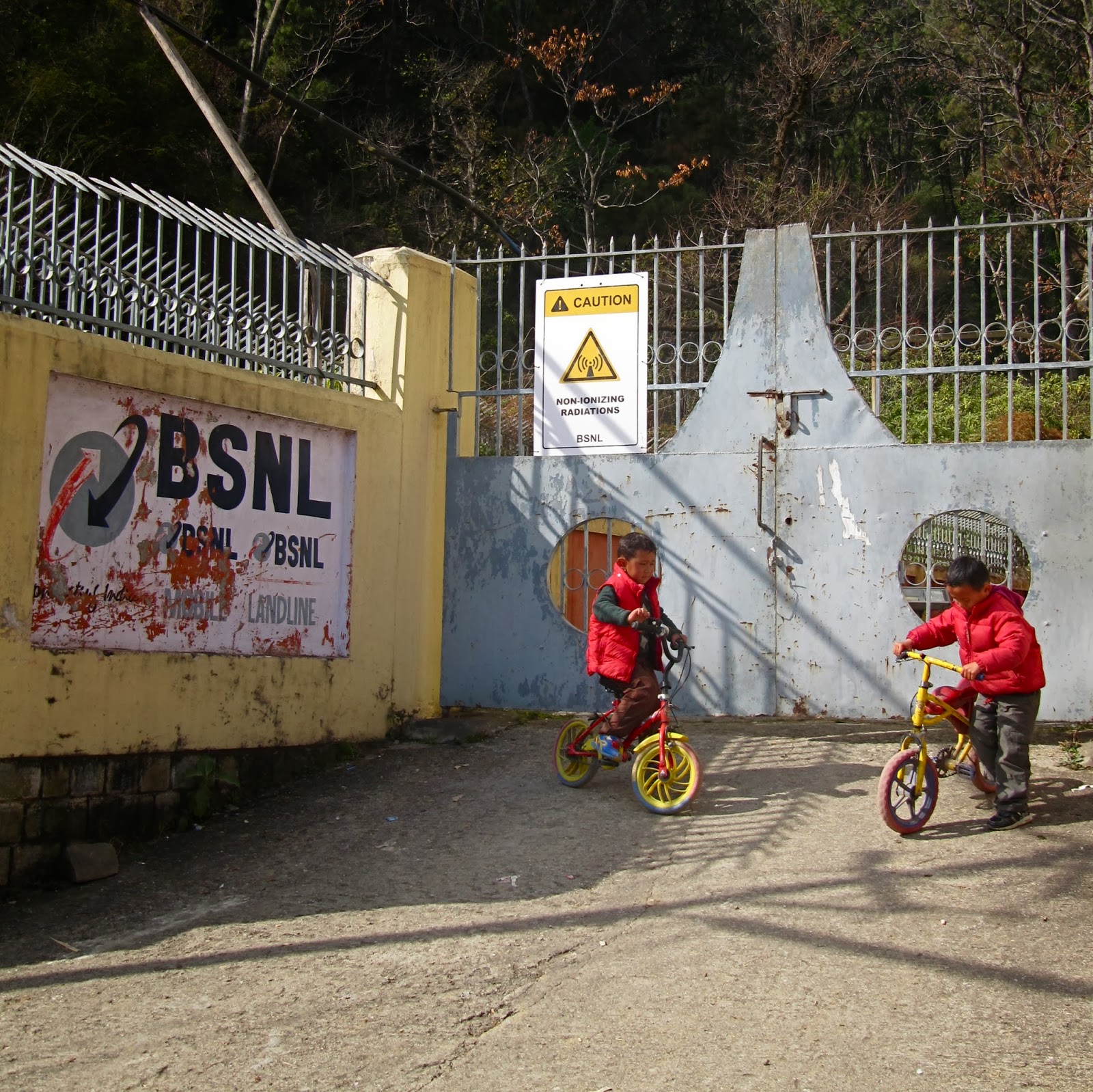 There was something poetic about these tiny little boys riding their bikes in front of the "Danger: Non-Ionizing Radiation" sign. Not sure what that means, and I'm guessing it's not particularly dangerous, but it just looks and sounds scary... 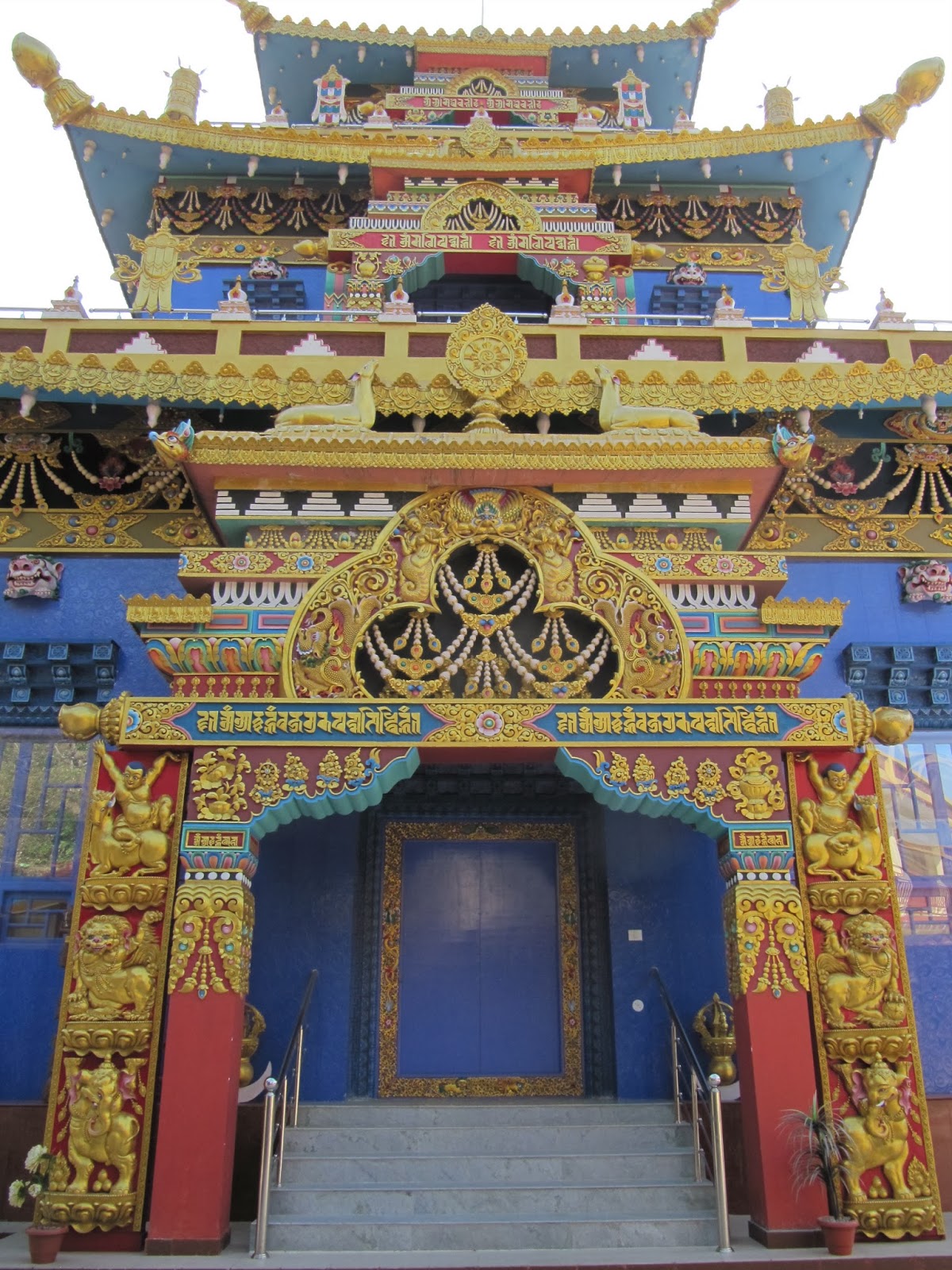 The next temple we visited was very special. This temple is called Zangdok Palri Palace Monastery and my Tibetan co-teacher belives it to be an actual 3-D mandala thanks to it's seemingly purposely colored walls of blue, green, white and red; and its temple upon temple upon temple construction. The palace is actually three temples stacked on top of one another. 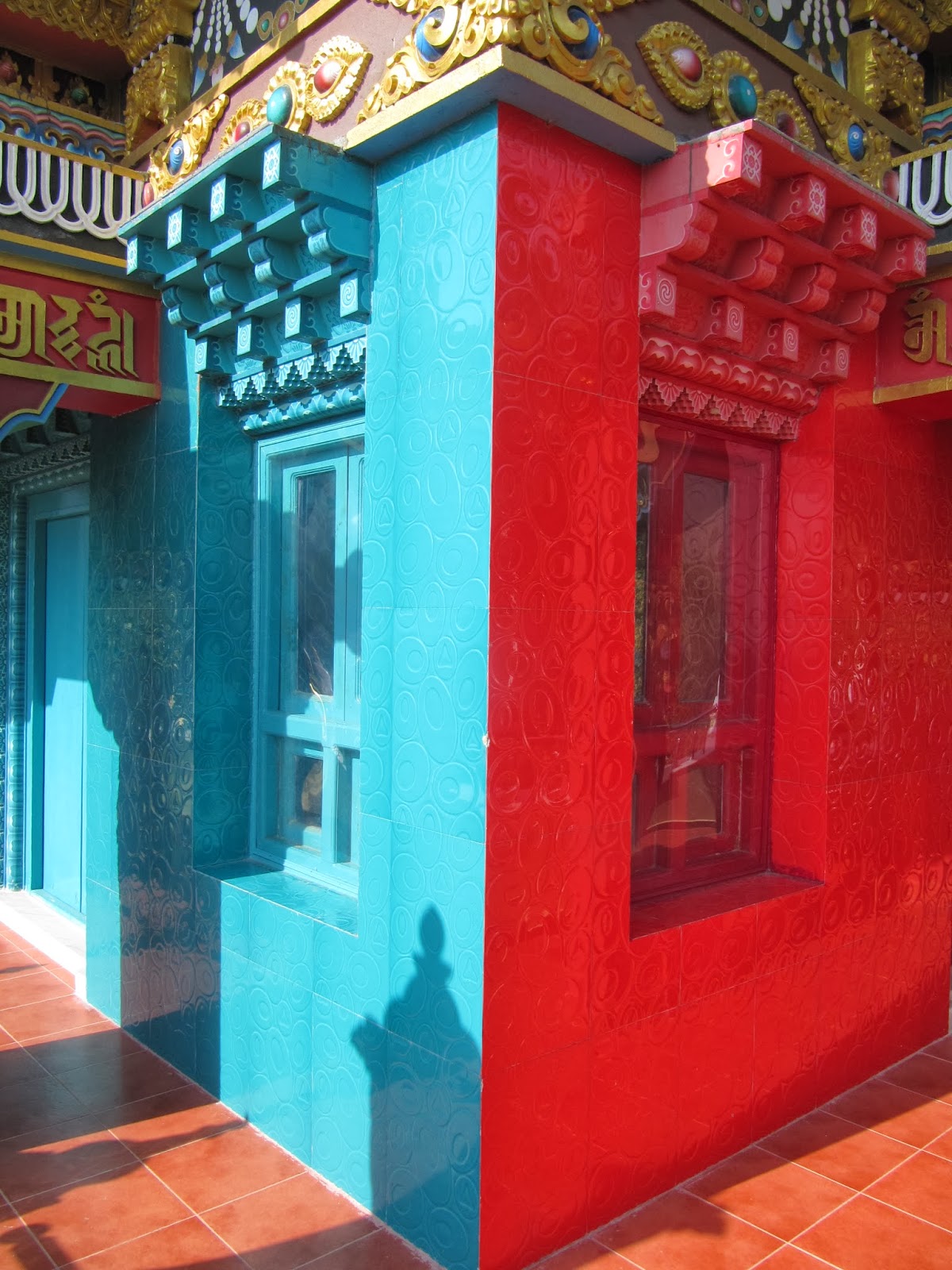 Red and green (blue?) walls of the palace monastery 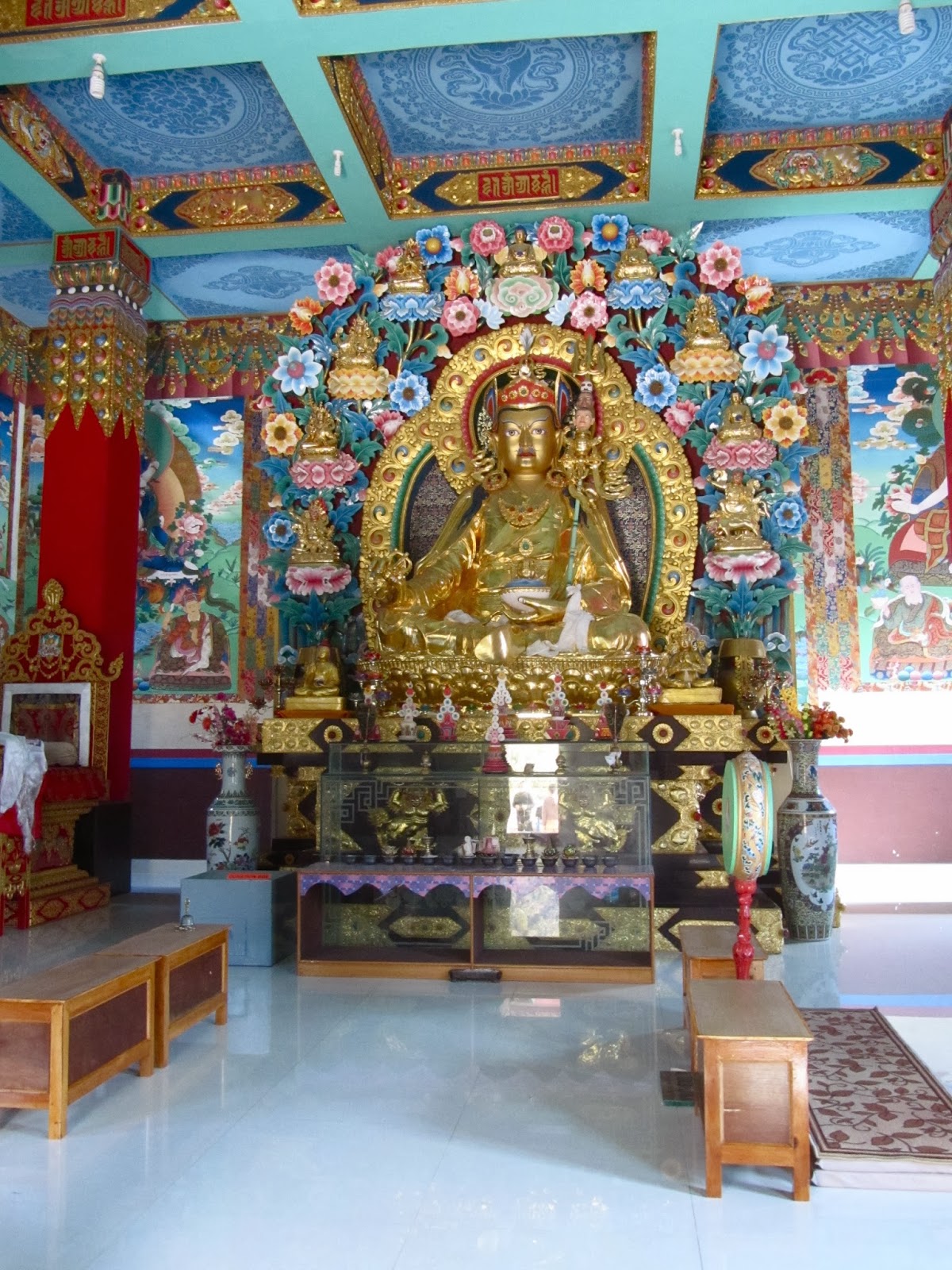 Buddha of the main hall in the Palace Monastery 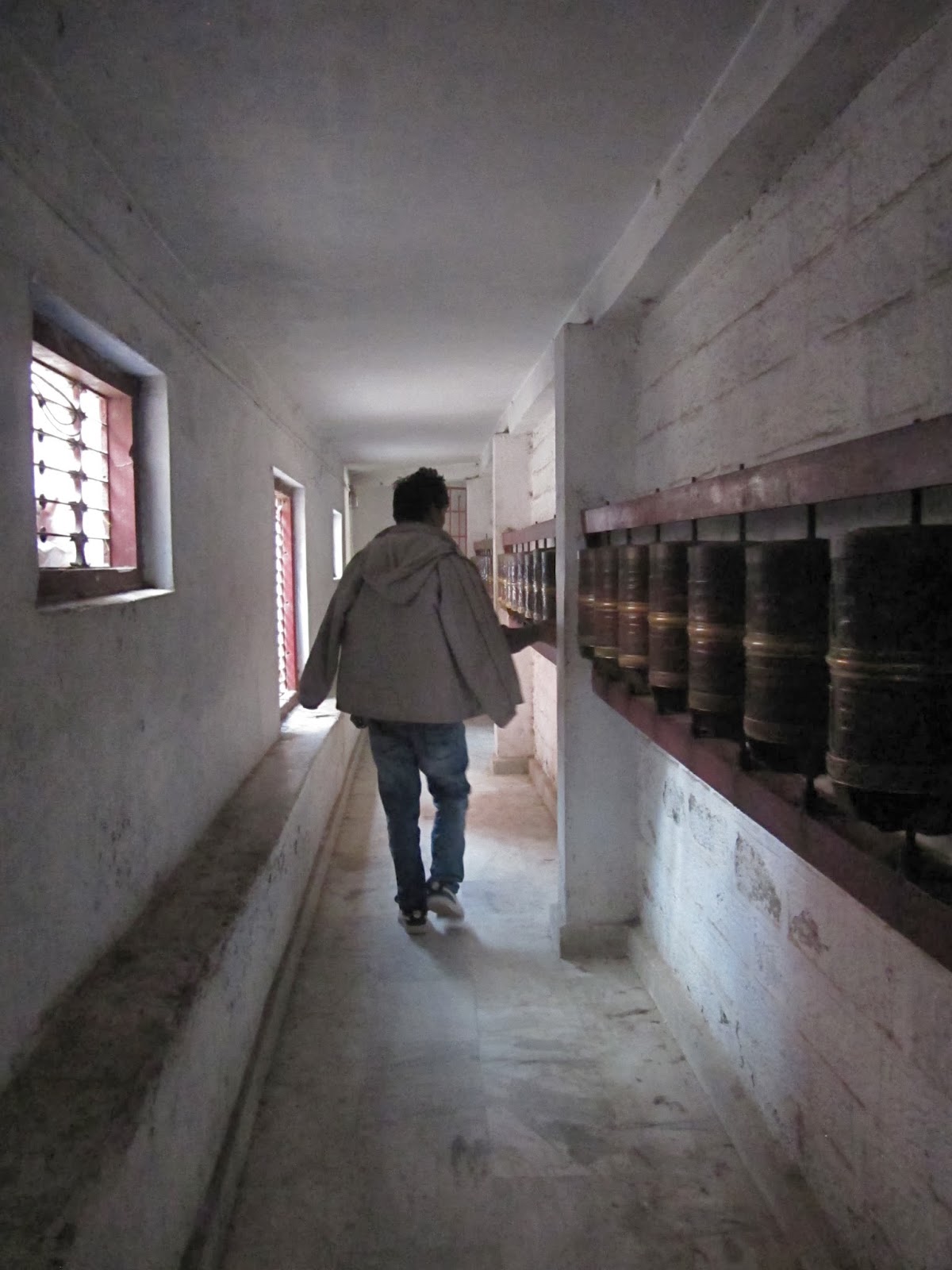 In fact, just around the lake, there are at least four Tibetan temples and monasteries. The photo above was taken in the last one. While here the architecture was not as spectacular as some of the other temples, they did have prayer wheels around the whole exterior of the temple. There is something really great feeling about spinning a wheel, which may or may not have something to do with the Buddhist mantras inside that activate for your salvation when you spin them. 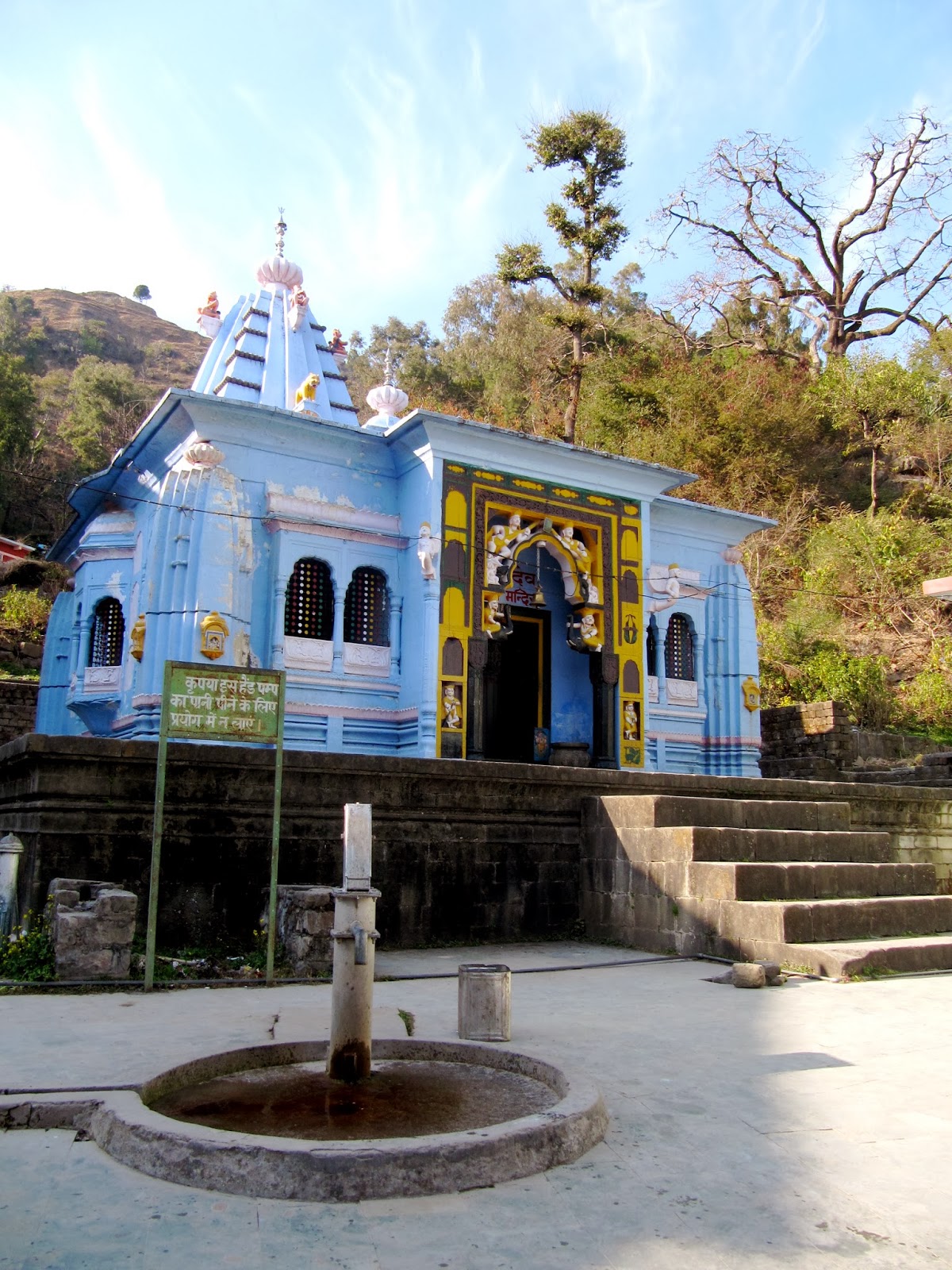 But as I mentioned before in my first post, Tso Pema/ Relwasar is not just famous to Tibetans, it is also important in Hinduism and Sikhism. Here, above, you can see one of the many Hindu temples around the lake. I don't know much about about these temples, but they are sure fun to look at and walk around!


To get here, we rented a private taxi to pick us up early in the morning at 6:30 am and take us there and back. This was convenient to visit the caves and do everything within a few hours as we only had one day. The price for the driver was Rs1,900, or $30USD to take us from Chauntra (between Bir and Joginder Nagar) to Tso Pema. However, there are public buses which are much cheaper that can take you as well. The town is just 30 minutes from Mandi, a moderate sized city in Himachal Pradesh.
Posted by 조안나 at 7:54 PM 0 comments 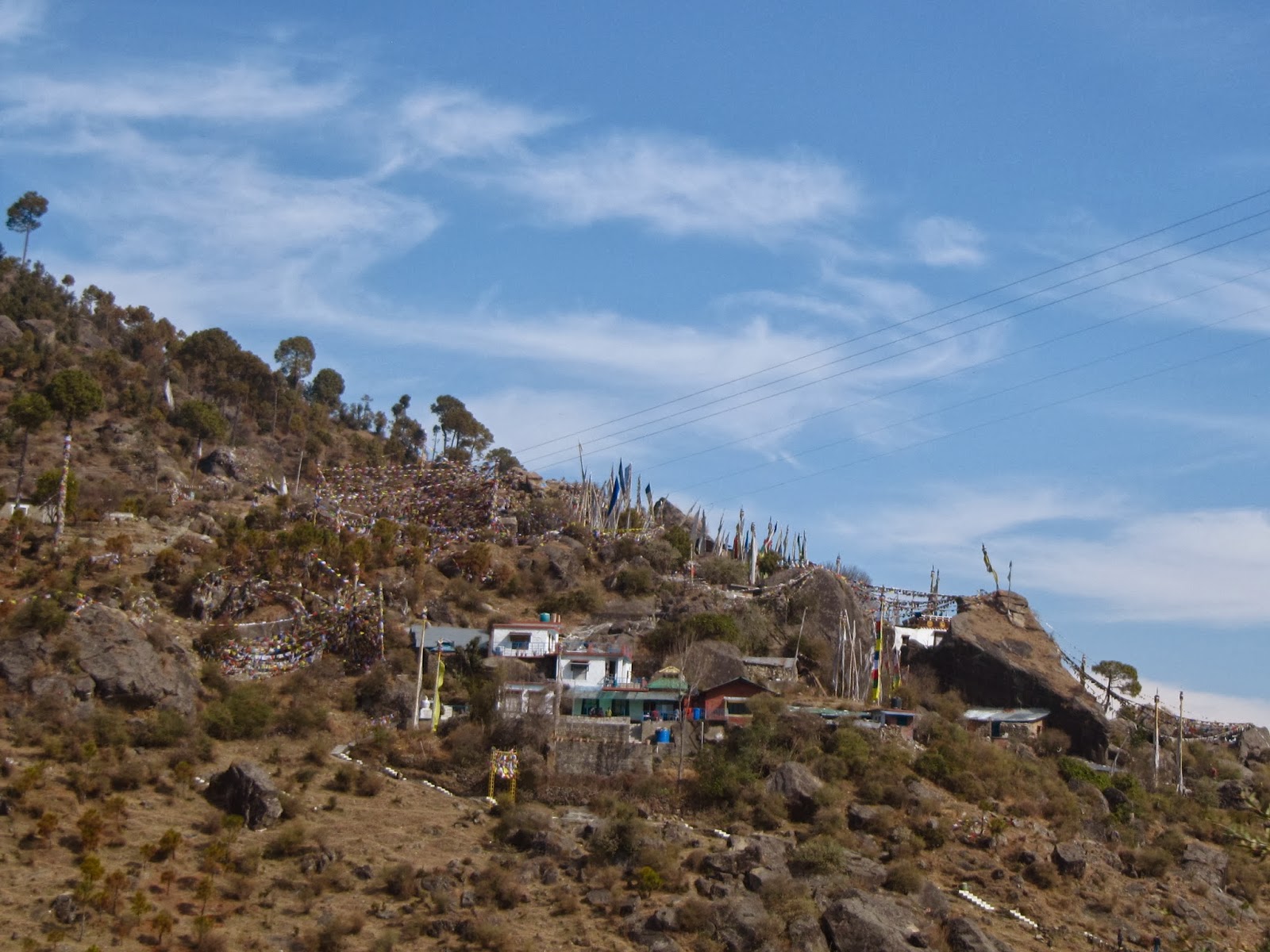 For my second day trip, my Tibetan co-teacher and I headed out to a very holy town for not only Buddhists, but also for Hindus and Sikhs. The area is called Tso Pema in Tibetan, but you may also hear it called Rewalsar in its Hindi name as well. Tso means lake and Pema means lotus, so it is actually Lotus Lake.


The famous Rawalsar lake ('Tso Pema' to Tibetans) is associated with Padmasambhava (also known as Guru Rinpoche), who is recognized as a second Buddha. One version of a legend has it that the king of Mandi had Padmasambhava burnt alive after rumours that the Guru had attempted to teach his daughter the Dharma, which was not accepted then. The pyre burned for a full week, with great clouds of black smoke arising from it, but after a week, a lake appeared at the spot where he was burnt and Padmasambhava manifested himself as a 16 year old boy from within a lotus in the middle of the lake. The king, repenting his actions, married his daughter with Padmasambhava. It was from Tso Pema that Padmasambhava went to Tibet to spread Vajrayana Buddhism. 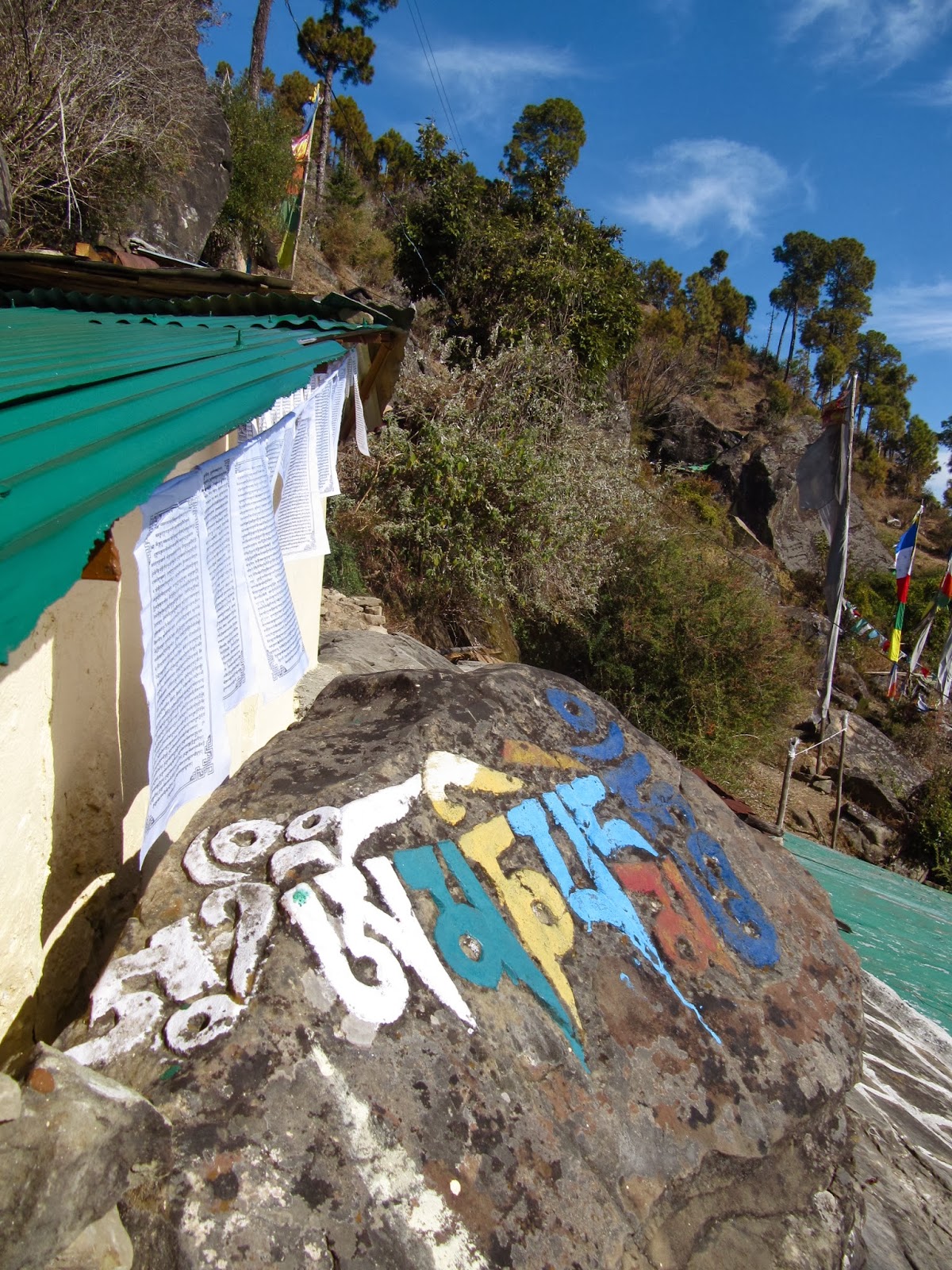 However, our first stop here was not the lake, but the caves in the mountains nearby which make this area so famous for Buddhists. It was here in these caves that Padmasambhava found enlightenment. Padmasambhava is considered a second Buddha and the one responsible for bringing Buddhism to Tibet. There are four important caves here, although, from the outside you would never know that they were caves. Outside of the caves, houses and roofs have been constructed and inside the caves the floors have been tiled and stairs have been put in, so actually they have become caves converted into temples or shrines. 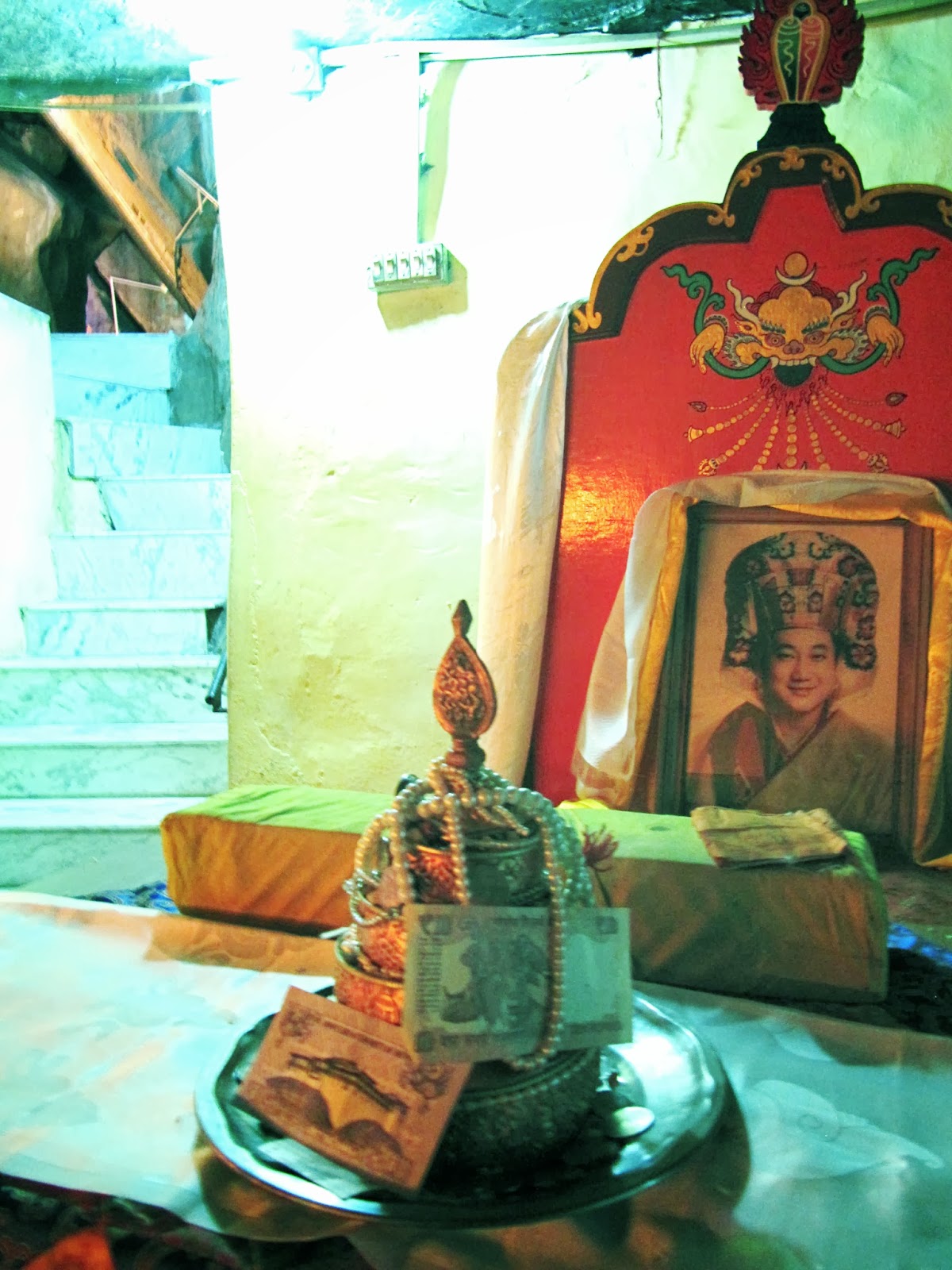 Inside the first cave: A portrait of a famous lama 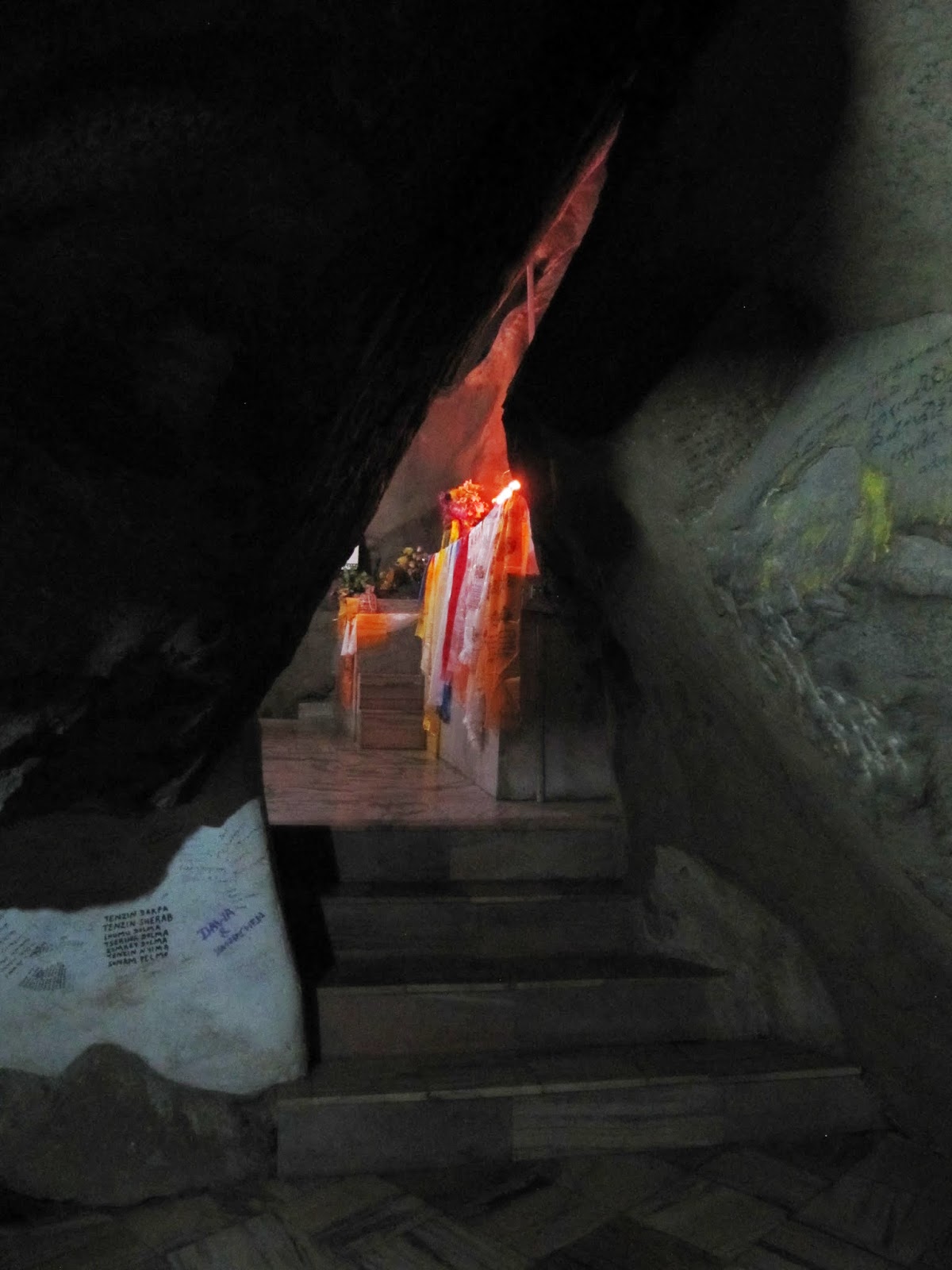 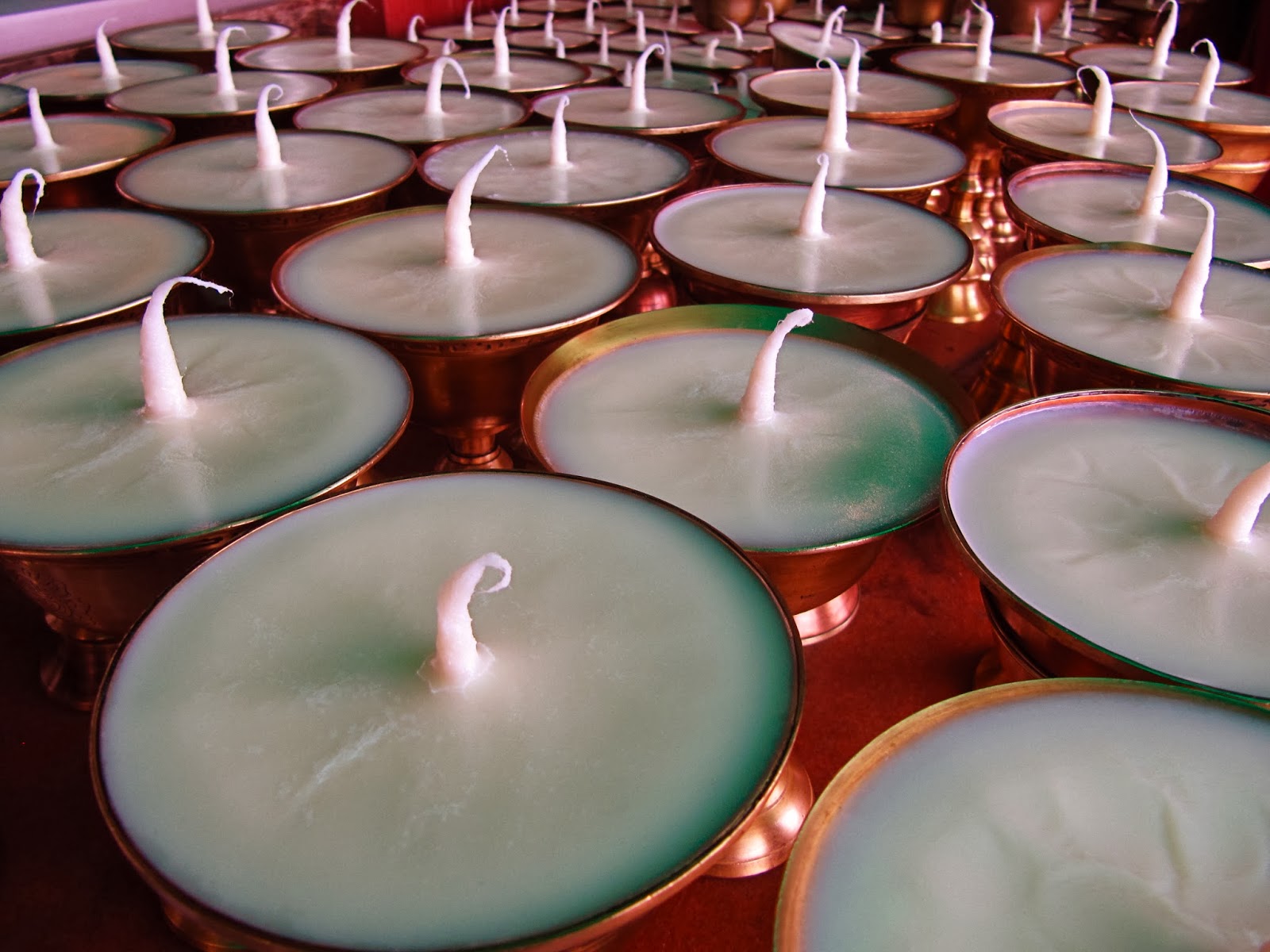 My co-teacher showed me these lamps. They are called "butter lamps" and you can buy one to make a prayer or offering. They cost around 50 rupees for one medium sized one. Some temples have special rooms just to burn these lamps, while other temples will let you burn them in a special area in the temple. 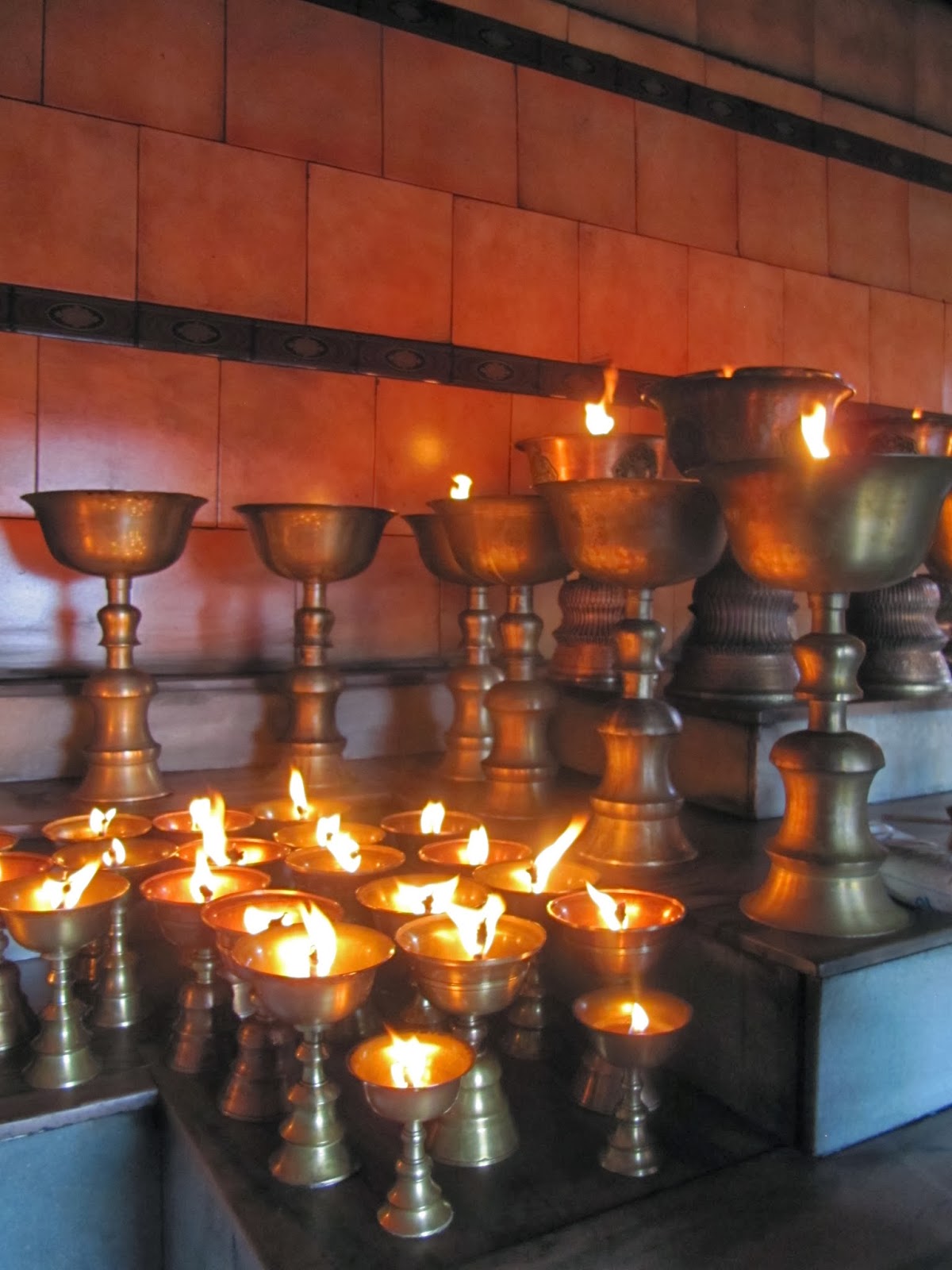 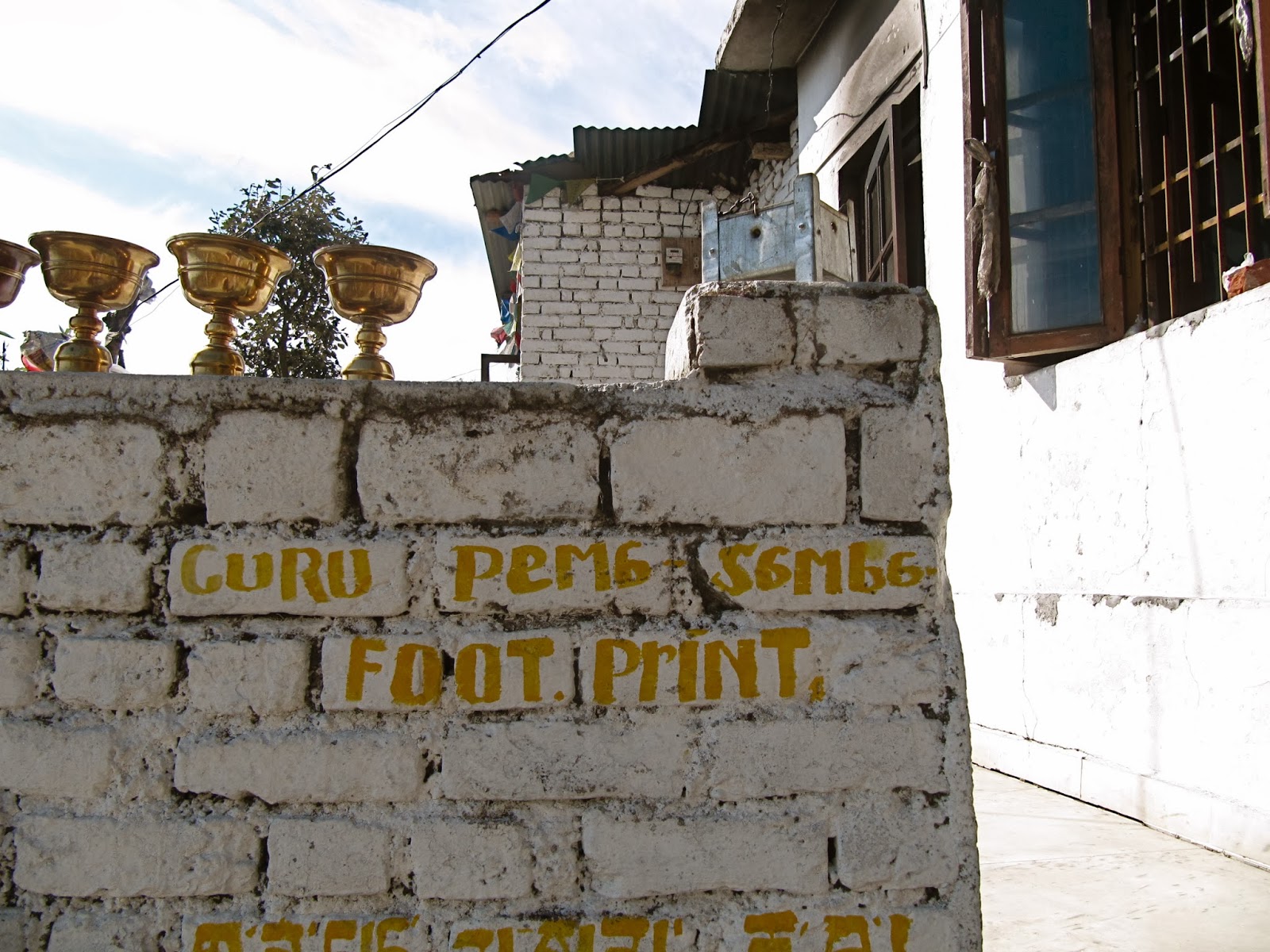 However, the most famous cave here is the small one containing the supposed footprint of Padmasambhava. My co-worker was a little surprised when he saw it, he thought it was too big to really be his footprint.... 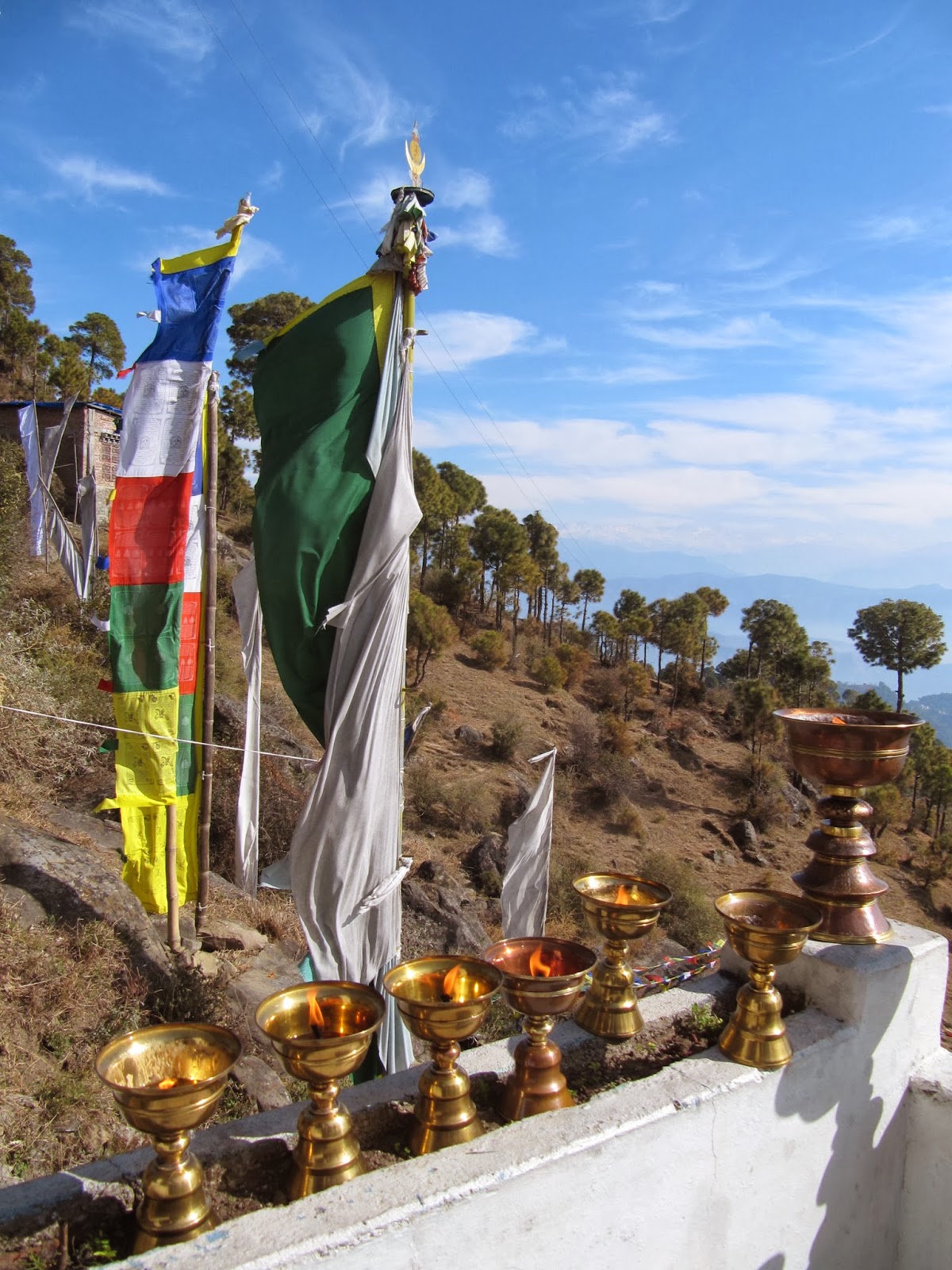 Butter lamps outside of Padmasambhava's Footprint 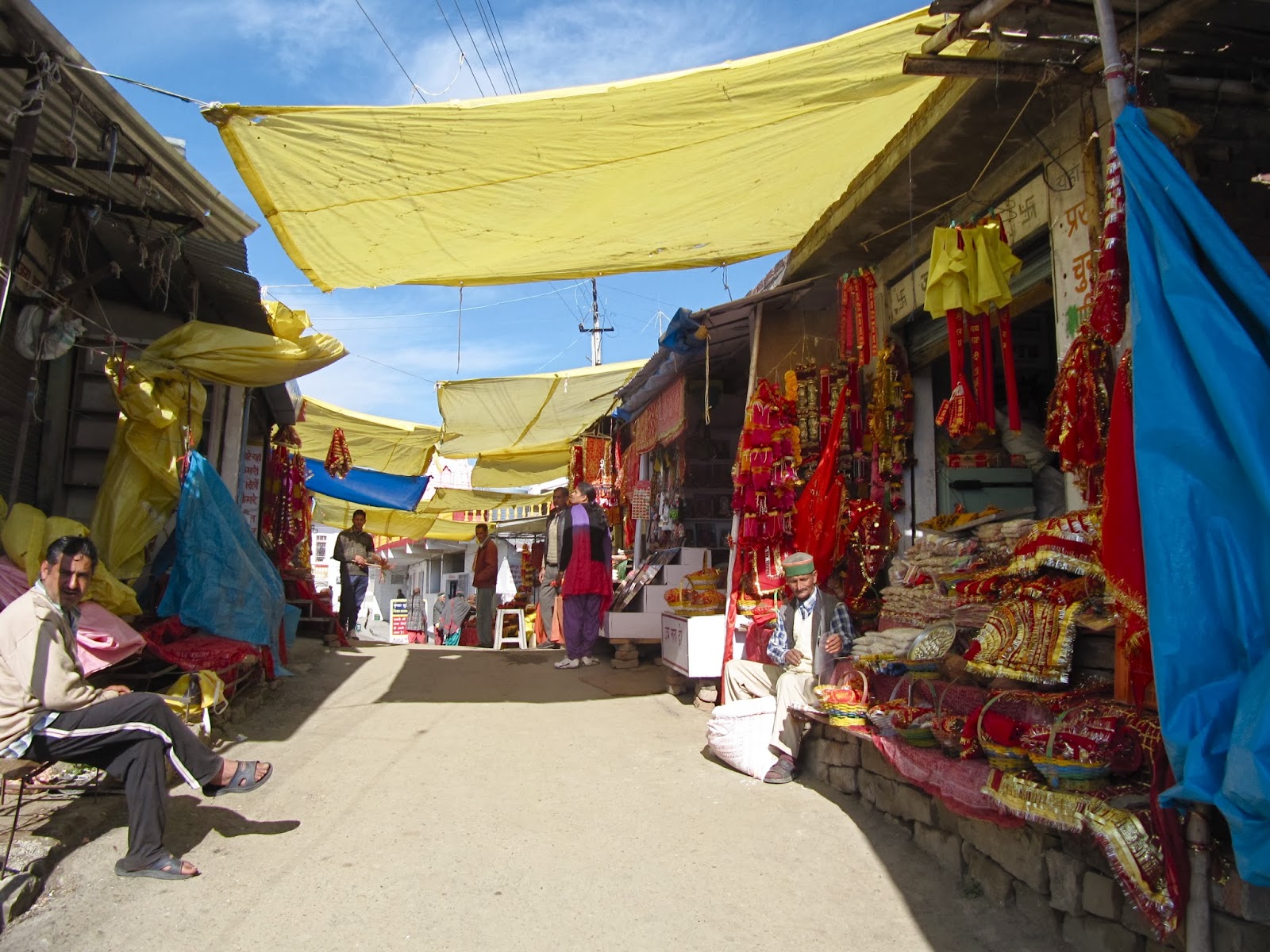 As we continued to hike up the mountain here, we came across a very big and beautiful Hindu temple. Though we didn't know much about the temple or Hinduism, it was still fun for me to walk around. One thing to note, that when you enter the grounds of a Hindu temple, you must remove your socks and shoes, even when walking around the outside of the grounds. Fortunately it was a warm and sunny day, so it wasn't a problem. 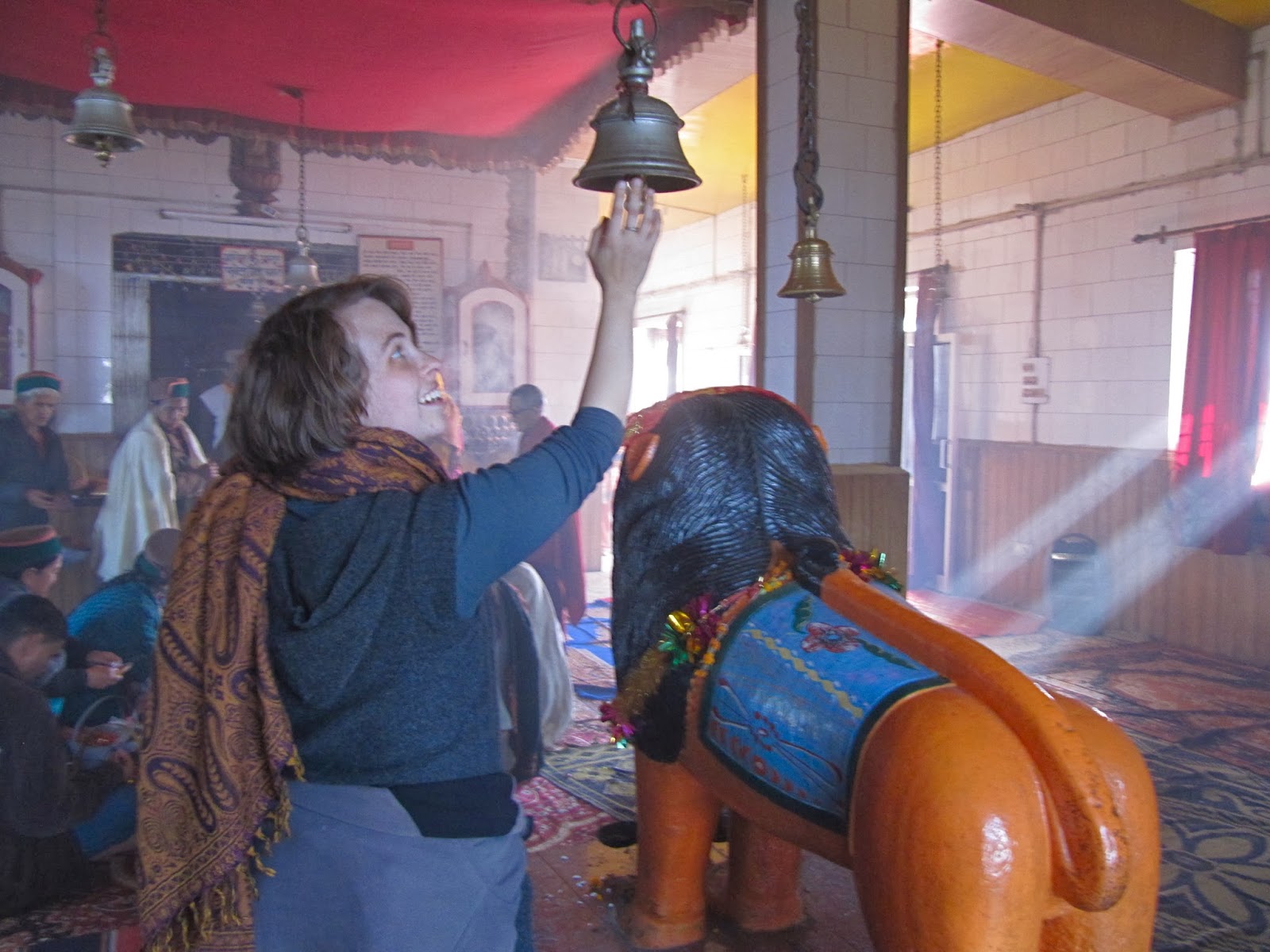 Inside the temple was smokey from all the incense burning. Around the perimeter of the inside of the temple, there were bells hanging every meter or so. As we and the other visitors walked around the temple, we rang each bell as we walked by. Very fun. Not sure about what the meaning of it is, but there is something about ringing a bell that makes you feel good. 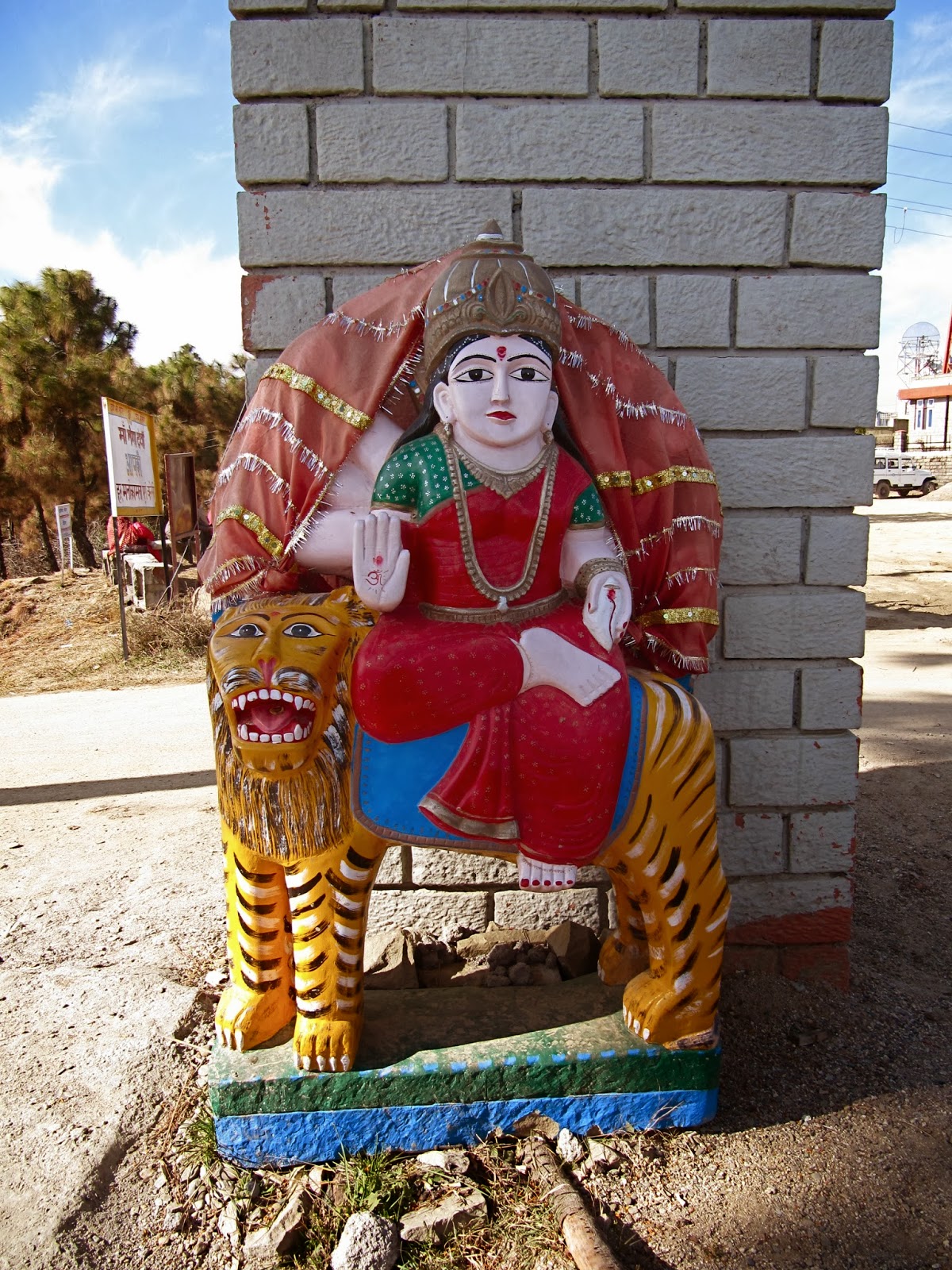 After checking out all the caves and the Hindu temple, which took about 2 hours, we got back in our cab and headed to the actual lake itself. Stay tuned for Part 2 where I will introduce the rest of the holy places!
Posted by 조안나 at 1:46 AM 2 comments

Up to the snow: Birling, Himachal Pradesh