Just 2 more weeks of grad school before graduation. But, I found a little movie to take a break from all the classwork. I hope you enjoy!

I'm a little late in updating this, but several weeks ago Sanghyun and I were featured on a new podcast called 'The Morning Clam' talking about Wild Korean and learning Korean in general. Check out the video here, and click the links to see more episodes of 'The Morning Clam'! To purchase Wild Korean, click here!

Last days at YBM and a brief review of the school 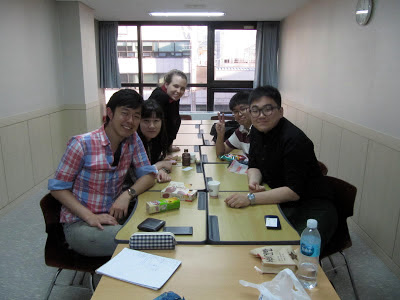 After a year and a half of teaching at YBM, I've finally left. I'm leaving, not so much because I'm sick of working there, but because I just won't be around enough in Korea for the next 6 months to justify them trying to hold my position. I'm back in the states now, working on finishing my MATESOL, I'll be gradutating in August, then I'll be heading back to Korea for my wedding, then honeymoon in China, then traveling more around China, then coming back to Korea and starting the job hunt for the next job, then going home again for Christmas.  It's going to be a very busy next 6 months... 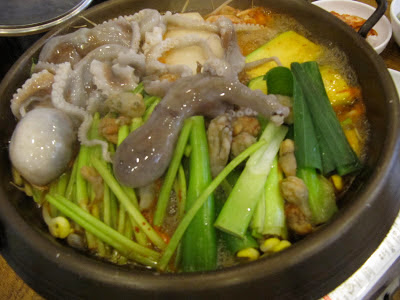 The last days at YBM were rather uneventful, but we did have the ultimate game of Monopoly (4 hours long) with the students pictured above, and one of my favorite halaboji students took me and another teacher out for this octopus stew. They added the octopus in whole and live, then cut him up as the soup boiled. I guess I've been living in Korea long enough that this just doesn't phase me much, but this was the first time I'd tried this particular dish, so I took a few photos to memorialize the event. 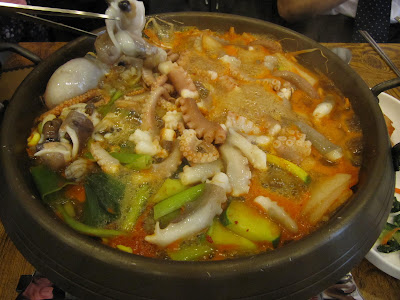 I thought I'd sum up the pros and cons of working at YBM Jongno, for anyone who is intersted in working there in the future.

Pros:
Cons:
Overall, though, I did really like working there, dispute the cons I listed here. The staff is a bit quirky, but so am I, so I think I fit in fairly well. I really loved working with the students, as I mentioned before, and the location was fantastic for me. I would recommend working at YBM if you get the chance, and they're often hiring, so check worknplay.co.kr often for their want ads.