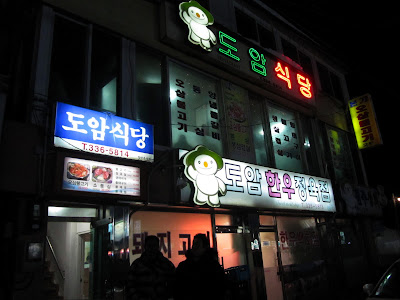 One of Hoenggye's most popular restaurants is Doam Siktang (도암 식당). On any evening in the peak season you can expect to see the restaurant full with people. By far the most popular dish here is the Gangwon-do specialty, Oh-sam-bulgogi (오삼불고기). '오' standing for 오징어 (squid) and '삼' standing for '삼겹살' and of course 불고기 here does not mean beef, but perhaps just refers to the fact that this is cooked in a similar fashion to normal bulgogi, well-marinated and cooked on a pan over a flame on the table. 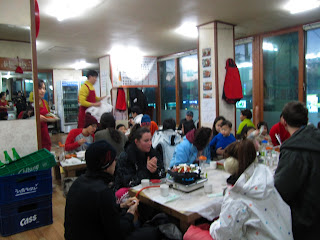 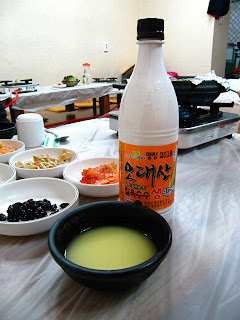 Gangwon-do, these days, seems to be doing a lot of creative things with their makkoli. One of which I see the most varieties of is corn makkoli. While I'm certainly not against getting creative with makkoli, this particular flavor is just one I can't really enjoy. I have tried at least 3-4 different brands of this, and each time we are left sorely disappointed.... 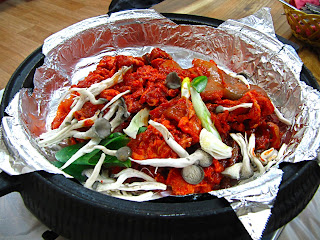 Anyway, on to the food. Above is our oh-sam-bulgogi just after it arrived on our table. A few fresh vegetables, but lots of meat and squid. 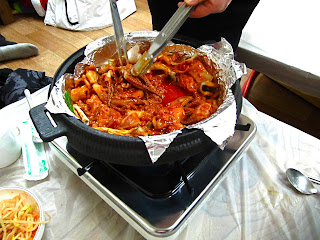 While it doesn't look particularly appetizing in the first photo, when it starts cooking it starts looking tastier and tastier. I'm not generally a huge squid fan (though I like it more than other sea creatures), I really do enjoy the squid in this dish. I still am not a big fan of the tentacles yet though. 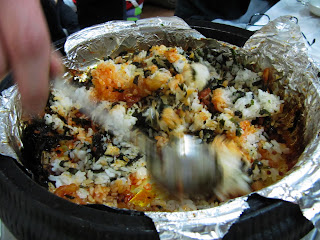 And of course, when you've eaten 5/6th of your meal, that means it's time to order the bokkumbap. Turn that heat back on and fry up your rice with the remaining meat and sauce. 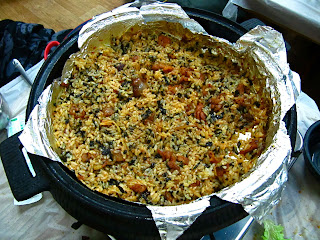 Doam Siktang is located right in the center of downtown Hoenggye, directly to the left of the rotary if you enter coming from the direction of the highway.  The main eating area is actually on the second floor, but they use the first floor for overflow when it gets too crowded.