Dokjeokdo..... Or How I Got Stranded on a Desert Island

Last Saturday morning we woke up at 6:00 am to get to Incheon by 9:30 to catch a boat to a tiny little island called Dokjeokdo, which is located about 80km off the west coast of Korea. It was supposed to be a great beach getaway, but it turned into a bit of a disaster. First problem we encountered was getting tickets to the ferry. Three of us bought tickets, but then they informed the other 5 of us that all the other tickets on for the boat were reserved for residents only. We had to wait until 5 minutes before departure before they informed us that we could get tickets because no residents showed up. We got on the boat and enjoyed the nice ride and some sun on the boat. 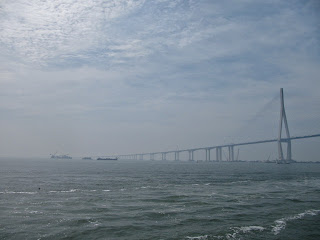 Here is a bridge being built to connect Incheon city with Incheon International Airport. It's a huge bridge and we couldn't see the end on either side. 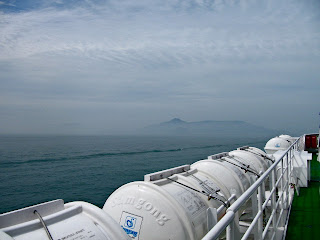 Here is our first view of Deokjeokdo. We got to the island just after 10:30. We got picked up by our hotel (pretty standard on an island with no taxis) and were showed to our rooms. The rooms seemed ok at first, but we quickly realized that the one electrical outlet in the room was broken, so nothing would turn on. We asked to be moved to another room, which they had no problem with, since it wasn't any sort of busy weekend on the island. We got moved into the next room over. Here the electricity worked, but there was no cable (the other room where the other half of our group had cable), and the bathroom light was out. We asked them to fix it, but I guess they forgot... even though there couldn't have been more than 5 other rooms occupied in the whole hotel.

But, oh well, we can deal with these things, so we put on our suits and went down to the beach. We were hungry and stopped by a restaurant. Turns out that it was "opening weekend" for the beach, so all the food was free. So, we ate our free noodle soup, happy that we didn't have to pay for it (though, actually, I wasn't a fan of the soup). Then we went to the beach. The beach was nice, but the weather was a bit overcast. We didn't care and we went in the ocean and we laid on the sand until it started to rain around 4:00. 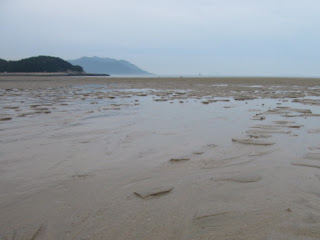 We headed back in and took naps at our hotel until about 8:00 when we headed out for dinner. We walked around forever and didn't find much. There were two ajosshi/ajumma couples fighting in the street over something... we walked away as quickly as we could. Then we happened across a huge ajosshi party to which we were of course invited and we of course declined.... as quickly as we could, though it took a good 20 minutes to shake them off of us. There was one creepy dude that followed us around all weekend. He just kept showing up everywhere and trying to talk to us.

Finally after at least an hour of walking and being eaten alive by mosquitoes, we found an awesome little restaurant where we all ordered a dukbekibulgogi soup that was amazing. As we were leaving the rain started up again and we went as quickly as possible to our hotel. We hung out for a while at the hotel, but we all slept early.

Around 7:30 Sunday morning, I woke up to the sound of whipping wind and torrential rain. It was quite a frighting sight, really. Mostly because I knew at that moment we were not going to get home that day. And even if there were boats running, I would not have gotten on it.

At 8:30 we got the official call from the front desk that all the ferries for the day had been canceled. Everyone flipped out. Some of my friends are the only foreign teacher at their school and have to pay for a substitute if they don't show up for work. Three of us were from the same hagwon, so we knew there was going to be hell to pay for three of us not showing up for work come Monday morning.

We made calls all over the place and were generally told to call back at 2:00 pm to see if weather conditions had improved enough to send a ferry. We made a call at 2:00 to that Seoul foreigner translation service thing (my friend calls them for any little problem and I guess they are always happy to help) and they came back with the message that there were ferries leaving at 2:30, 3:30, 4:30 and 5:30. We made a mad dash to get all our stuff together after we had been slouching around all morning and ran to the front desk to ask for a ride.

The front desk on the other hand was quite confused.... "But where are you going? There are no ferries until tomorrow..." We explained to them that there were in fact ferries, our translation service had told us so, but he made a call and said that there were no ferries. We decided not to trust him and had our Korean friend make a call to the ferry HQ too. She got the same answer. No ferries. We called our translation service back and got another person to talk to... she made the call for us and came back with the same answer.... no ferries.

Everyone was quite upset. I was the only one seeing the clear benefit of having a totally legit excuse not to have to go to work. My hagwon wouldn't fire anyone for missing one day of work and giving notice ahead of time and for circumstances beyond control. So... hey, to me, there was no downside. Well, except for all my fellow teachers who had to cover my position and not get paid to do it since one day of substitute teaching never puts anyone in overtime hours.

My friends on the other hand were really upset and contemplating what they were going to do tomorrow about getting their classes covered and whatnot. We were also then considering what do do for the upcoming night. We were not happy with the hotel, as I mentioned. While the staff seemed nice enough, we'd just had so many problems. Our bathroom light finally got fixed around 10:00 am the next morning, but in a bathroom with no windows, waiting almost 24 hours is not acceptable. Some of the members of our group went down to negotiate a price for the next night. Now it was Sunday night (so not a weekend night), and there were no ferries coming, so there were no guests coming, and with all the problems we had, we felt it reasonable to ask for a discount for the next night. Frankly speaking, I was fine paying 50,000 won for one room ... split 4 ways, so only 12,500 (aprox $10.00 USD), but some of my friend's money supplies were dwindling since we thought this trip was only going to be about 24 hours long. The man at the front desk explained that the owner was not available at the moment, so he wasn't able to negotiate the price with us. He asked us for another 50,000 per room for the night. My friends were pissed off by this and found another hotel about a 5 minute walk away and we promptly left. I felt really bad, though, because they started up the car to give us a ride, but we really couldn't let them drive us to our new hotel... we felt guilty enough as it was. 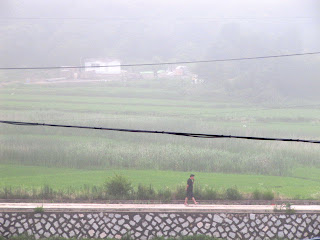 At the new hotel, we explained to them that we were short on money (it may have been over exaggerated) they gave us two rooms for the price of one, aka 50,000 for two rooms for the night, or 6,250 won (aprox $5.00 USD) for the night per person. This place was a bit cleaner, but smaller, and no TV, so we had to make some compromises, but everyone was happy enough. By this time, around 3:30, the rain had cleared up and the sun even peeked through for a few minutes. We put our bathing suits back on and went down to the beach. The beach for me was rather intolerable. The wind was still whipping and I was freezing. Sitting on the sand was impossible because the wind was whipping the sand right into our faces. Most of my friends went down into the water, as there were actually some waves because of the storm, but one other friend and I went away from the beach to an eating area where we parked ourselves with our books and a snack or two from the convenience store and just read until the other folks got sick of the water.

We then changed and went back to that eating area to get some dinner. We got donkasu, even though the prices were a little steep... it's an island, so everything has to be a bit more expensive. Finally we went back to our hotel and hung out and slept.

We had found out that there were to be three ferries to arrive at 7:10am on Monday morning to pick up all of us stranded people. So, we wanted to be the first ones in line for the boat, so we asked to be driven at 5:40am for that 7:10am ferry. Actually, it took the driver a while, but we still got there by 6:10 or so, and there were already some folks lining up. There was no system to the line and as the first boat approached, we realized that we were going to have problems, because each boat was from a different ferry company. They only wanted to take their own passengers FIRST but then they opened it up to everyone. Well, as you can imagine. Hundreds of angry Koreans... 75% of whom seemed to be ajummas... all trying to rush the boat at once. Even though they kept shouting that only the people with that special ticket could come on, people kept pushing forward. Then they announced that everyone could come on and the rush became a stampede. 5 of my friends got on the boat, but we had gotten split up and I didn't realize it until they were already on the boat shouting for us to get on. We couldn't move. We were being elbowed by ajummas on all sides. We just had to give up.

The three of us left got on the next boat with no difficulty. We got back to Incheon a little after 8:30, and we met our friends at DongIncheon subway station before 9:00. They bought McDonald's breakfast for us while they were waiting. We went up and caught the express train back to Yongsan Station in Seoul. From there we took a taxi home. The moment I entered my house I realized something was missing. My bag that contained my bathing suits, my favorite top and my Korean book for class. But you can read about that adventure here.

I made it to school just before snack time, missing only the first 80 minute block of school.
Posted by 조안나 at 8:43 AM