I was thinking lately that I needed to post up some recommendations of some of my Korean books. I've been studying Korean since 2006 (a little) and been studying pretty hard for the past two years here in Korea so, I've gone through a lot of books, good and bad. If you're in the market for a Korean book there are millions nowadays to choose from. While I've only studied from a small percentage of those, I hope this might help you in your decision when buying a new book. 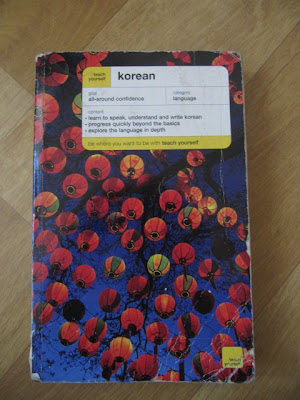 Teach Yourself Korean: This was the first book that I used for studying Korean. It's one of the few available in an average bookstore in the US, or at least it was one of the only ones back when I bought this in 2006. Despite it's modest appearance, it's a great book. It has excellent explanations of grammar, lots of exercises and great dialogues. But, there are three problems with this book. a) It doesn't teach hangul well. b) It expects you to have trouble reading and it writes some of the exercises in romanized form. It's good at the beginning, but hopefully by the time you get through a few chapters you shouldn't need it anymore, but they use it throughout the book. c) At the time, this went a little too fast for me. I only got through a few chapters before things got above my head fast. As I wasn't in Korea and I was only studying when I was bored, I couldn't keep up. Anyway, despite these faults, it's a good book, probably the best that's commonly available in the US. 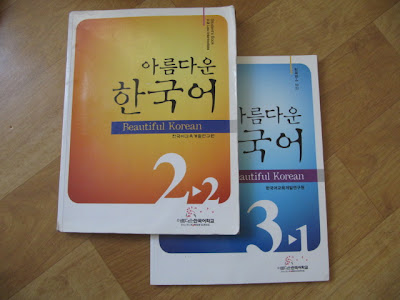 Beautiful Korean: When I started studying in Metro Korean Academy, the first book series I used was Beautiful Korean. I studied this from 1-2 up to 2-2. It's a decent series and I like it because they don't overwhelm you with vocabulary or grammar. Each chapter has two grammar points and a reasonable amount of useful vocabulary. In the lower levels it also has grammar explanations available for English, Chinese and Japanese speakers where most university textbooks rely on Korean explanations in the textbook. One downside though is that there are not many exercises to practice vocab or grammar. It's probably better for a classroom setting or with a conversation partner rather than self study. 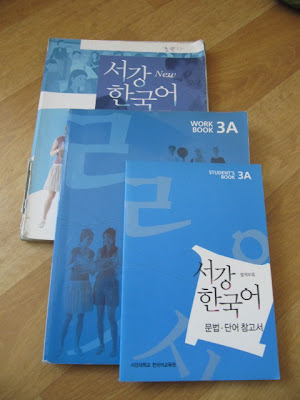 
Sogang Korean: When I moved into level 3 at Metro, we switched to the Sogang series. I was quite pleased with this book. The only downside to using this in conjunction with the Beautiful Korean series was that Beautiful Korea didn't teach reported speech in level 2 (which I think is a good thing personally) but Sogang did, so we had to play catch up. It literally took two months to learn all the reported speech conjugations while we studied the rest of the book which was kind of distracting. Anyway, the Sogang books themselves are great. Each chapter is divided into speaking, grammar, listening and reading (not much writing to be found in the text book). The stories are interesting to read and there are lots of illustrations and photos. I think as far as interesting textbooks go, this one is one of the best I've found. As you can see in the photo above, there are actually three books you need to buy if you get the whole set. The student book, the workbook (which is great for practice if you have the time to study), and the student book supplement which is available in English, Japanese and Chinese so that you can have explanations in a more comfortable format. Overall, it's a great series, but only for classroom study. There are lots of discussion pages and it's kind of hard to discuss a topic by yourself. The price also adds up when you include all three books. When I studied in level 4 I decided not to get the workbook since I didn't have time to do the exercises. 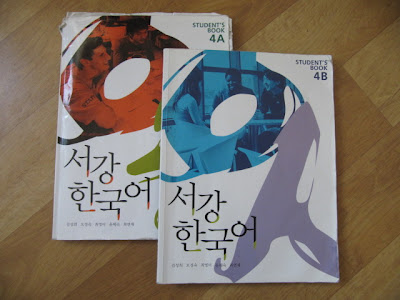 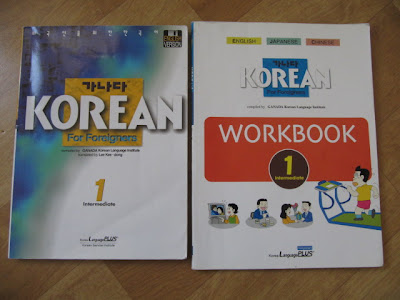 Ganada: I only studied this Ganada book for one month in a Saturday course at Korean Language Academy in Gangnam. I wasn't particularly impressed by the book or the class and I switched back to Metro. The book has very few illustrations, short, uninteresting dialogues and exercises that need to be done in a separate notebook because they don't give you space in the book. While I did not like this book much at all, my boyfriend was quite happy with it. As he teaches Korean classes on Saturdays, he often uses this book when he teaches level 3. While it's not intriguing, it does have good explanations of grammar, in English, in the book (no supplements necessary). The exercises are also good for doing orally in class. So, while I was not a big fan of this book, it may be worth studying in the right environment. There are also Chinese and Japanese versions of this book available. 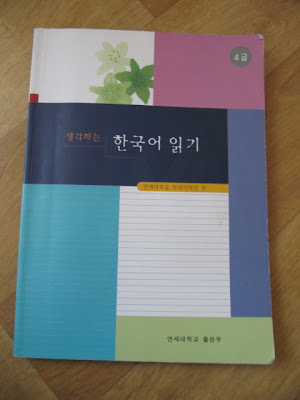 Yonsei Leveled Reader: Upon the recommendation of a classmate of mine, I bought this Yonsei reading book. It comes in six levels and actually is great for reading practice. When I went to Kyobo to buy this, they didn't have the level 3 which I wanted (reading is not my strong point) so I bought the level 4. When I flipped through the book in the store, it looked fine, but as I actually read through it I found it way over my head. All the word definitions were explained in Korean, not in English, and some of those words weren't even in my dictionary. This actually was a good way to learn some vocabulary, but I found that I needed to look up every third word and I realized that that is not an effective way to study.  If I find the time to do some more reading practice, I'll go back and buy the level 3. I have since seen it at Kyobo bookstore and it looks much more appropriate for my level. 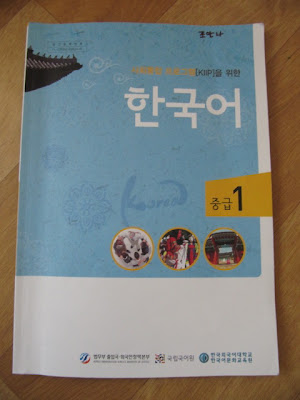 KIIP Textbook: This is the book that I have just started studying for the 사회통합프로그렘. As it's Intermediate 1 (Level 3) it's a little on the easy side, but even in just the first chapter I've already had one grammar point that I was unfamiliar with (and one that I use everyday and was quite bored during the hour that the teacher went over it). It's also nice because they don't just talk about language, but history, culture and geography as well. Our first week's lesson was learning the provinces of Korea. This was good for me since I have heard of most of them but I could never have found them on a map. I should probably study that map a little more because that's some useful stuff. I hope to write a post about this class as I get further into it and I can write more about the book then. Unfortunately, this book is not commercially available and is only provided, for free, to the students of this government run class. 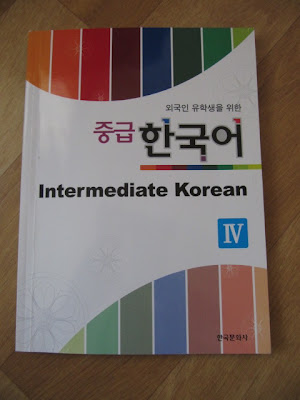 유학생을 위한 한국어: This is another new book to my repertoire, I just bought it a little while ago and started studying with it with my conversation partner. I mainly bought it because, while it is a text book, it mainly focuses on grammar. After doing the first chapter I practiced three grammar tenses. One which I had never heard of, and two that I'd learned before but rarely use. It's also got some worthwhile vocabulary here too. If you want to study on your own this could be a great book. Unfortunately, it doesn't explain the grammar at all, so for me it's best do to with my conversation partner. 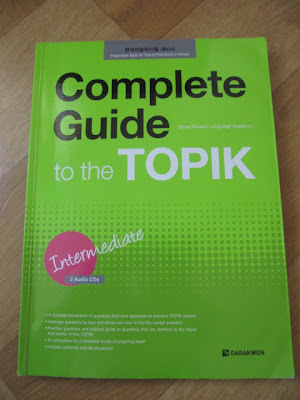 Complete Guide to the TOPIK: This was the only book that I bought to practice for the TOPIK exam. It's basically just a practice test book, though perhaps better than some because it has English explanations for the first test (there are three tests). But, this test is based on the old format of the test, not the new one, the writing questions were much more difficult than the ones on some of the newer tests. Really, when it comes down to it, when you can download all the old tests for free online, is it really necessary to pay for a book of practice tests? If you're looking for TOPIK practice, it may be better to buy a book that focuses on one subject like reading, writing, listening or grammar. 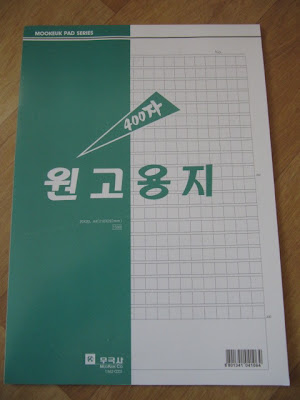 원고지: Ok, this one isn't a book, but rather writing paper. For westerners who are not familiar with writing on this paper it's really important to buy this before taking the TOPIK test and to practice writing some essays on it. Korean proficiency tests judge the length, not by the number of words, but by the number of syllable blocks (자) used. My Japanese friend found it very surprising that I had no idea about the rules for writing here, but this paper is useless for writing a roman alphabet. I guess it's also commonly used in Japan as well so she had no problems figuring out the rules. For example, all punctuation is considered one space. Leave one space between sentences. Leave one space to indent a new paragraph. I'm still not clear on how to write English letters here properly. Anyway, get a Korean friend to walk you through it and correct your essays on 원고지 rather than on lined paper, since you'll need to be prepared to use that on the real test. You'll also find that while 400자 (minimum amount for the 중급 TOPIK) sounds intimidating, it's not so long when you add in all the spaces and punctuation.


Hope this helps you when you go to buy your next book. While it's only a small sampling of the books that are out there, it covers a lot of the most popular books out there. If you have any other recommendations for Korean books, please leave them in the comments!
Posted by 조안나 at 7:19 PM