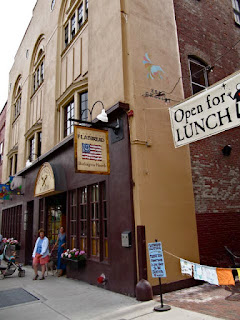 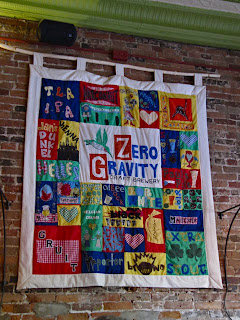 Last night I had dinner at one of my favorite places in Burlington, VT, American Flatbread. Flatbread is like a pizza, but not. It's flatter, without the puffy crust of pizza, may or may not have sauce and is often made without yeast. American Flatbread is great because they are dedicated to serving locally produced and organic ingredients in their food. 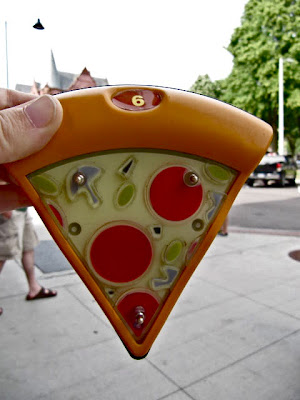 We tried to have an early dinner around 4, but they actually close down during the afternoon and don't open until 5pm. We had to come back at 4:30 when they started taking names for dinner. I loved the buzzers they give... they are in the shape of a pizza :-) 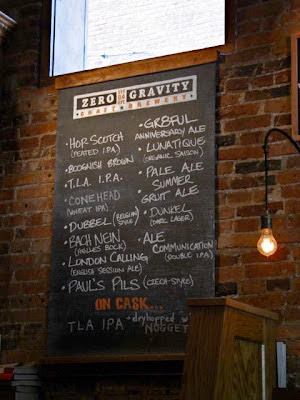 You can, however, go in and have a drink at the bar which is run by the in-house brewery called Zero Gravity. After coming from Korea where, outside of Itaewon it's hard to get a glass of anything except Cass, OB or Hite which are all generic, mass produced pale lagers which are akin to Miller or Budweiser, it is so nice to be able to walk into a restaurant which makes it's own beer. While this is quite common nowadays here in Vermont, Zero Gravity not only makes it's own beer but makes enough to fill an entire beer menu. Just look at the photo above, they have 15 different brews, all on tap, made right there on the premise. There's a beer here to match any beer drinker's taste buds. 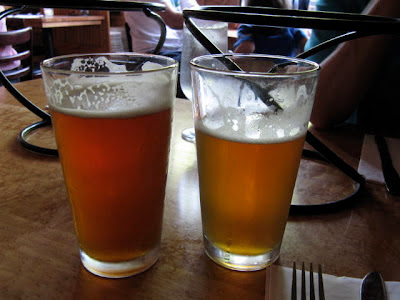 I tried the TLA IPA while my mom got the summer pale ale. Both were great, but I'm always a fan of IPAs. 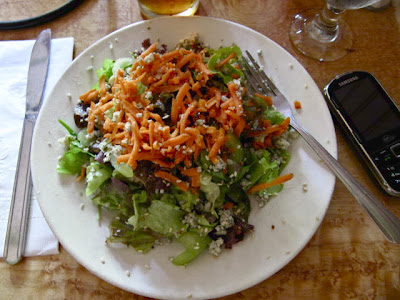 Finally we were seated and it was time to order dinner. We went with salads and one large flatbread for the three of us. The salad is called the Evolution Salad and is described as "Organically grown sweet leaf and mesclun greens with organic carrots and celery, arame seaweed, toasted sesame seeds and a fresh tamari-ginger vinaigrette flavored with our homemade raspberry vinegar." Sounds good and healthy, right? 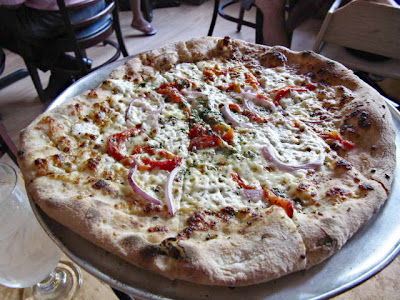 We ordered a large flatbread, half cheese and herb (no sauce) and half "punctuated equilibrium flatbread" which has goat cheese, roasted red peppers, red onions and (what we asked for without), olives. When they brought our large flatbread they had forgotten to leave out the olives, but realized it before they even put the flatbread on our table. Without even asking, they informed us that a new, small Punctuated Equilibrium flatbread would be brought over to us in a few minutes. I didn't get to take a photo of the first, large flatbread because we were so hungry we devoured it before I remembered to take the photo, but when the small flatbread sans olives came to us I snapped this photo before we took a bite. I love the taste of goat cheese, it has so much more flavor than plain, old cheese!

Next time you're in Burlington, VT (or in their other locations of Middlebury, VT, Wakefeild, VT and Tribeca, NY) be sure to stop by for a yummy, organic piece of perfection. Oh, and a great glass of beer. Check out their website here: http://americanflatbread.com/ for more info and directions.
Posted by 조안나 at 6:39 AM