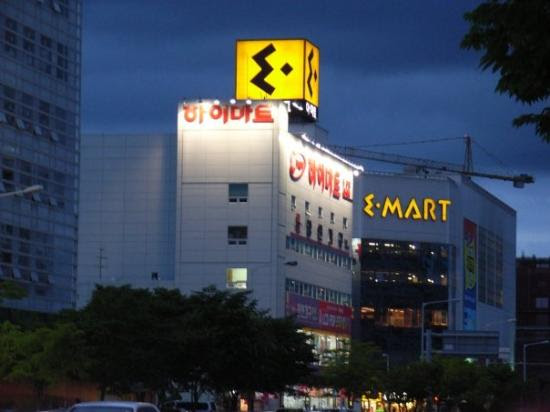 First I should mention what E-mart is. E-mart is sort of like a Korean style Walmart, with a full sized supermarket. They are found all around, and there are other similar chains, such as Homeplus and LotteMart. These places don't offer dirt cheap prices like a Walmart at home, but Koreans are much happier with E-mart and other similar places because they offer the services and products that Walmart never figured out how to provide to the Korean consumer (Walmart here was for a short while, but didn't last long and pulled out after a few years). Visiting E-mart is like a bombardment of the senses. Women dressed in aprons or mini skirts are trying offering samples of products at the end of every aisle, fresh seafood can be seen in tanks, swimming free, waiting for their eventual demise, and customers hustle and bustle on all sides, especially if you make your shopping venture on a weekend. You'll probably bump into one of your students because when you ask them on Monday, "What did you do this weekend?" they nearly always reply, "I went to E-mart!".

I've found the best time to go to E-mart is after 9:30 pm or so. Why? Well, there are less crowds, which is definitely a plus, but, all the fresh food is on sale for up to half price. Some meat and fish are discounted. Sushi is about 30% off. Ready-to-eat food is usually 50% off or so. Also, sometimes you can get decent deals on vegetables (probably the ones that are about to go bad). Frankly, I still prefer shopping at my market for my vegetables, but sometimes it's convenient while I'm here to pick up something if it's cheap enough.

Anyway, if you're planning a trip to E-mart, I suggest waiting until after 9:30.. they are usually open until 11 or midnight anyway, and check out the sale items.

Email ThisBlogThis!Share to TwitterShare to FacebookShare to Pinterest
Labels: Shopping