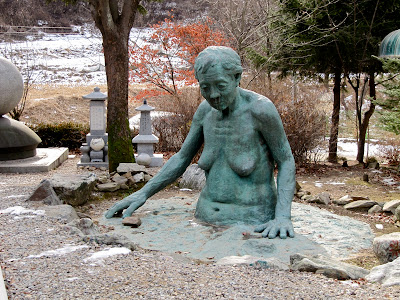 Sunday I had an amazing opportunity to visit the House of Sharing in Gwangju, Gyeonggi-do province, about 45 minutes from Seoul. This is a house where women, who survived sexual slavery by the Japanese military during Japan's military expansion into the rest of Asia before and during World War II, have come to live together. The Japanese term for these women was "comfort women" but their position was far from comfortable. Today we refer to them either as sex slaves or simply Halmoni (Korean for grandmother).  Estimates of how many Korean women were conscripted into this brothel system are between 50,000- over 200,000. Many died or were killed as they served the Japanese, and most of those who survived were left behind in the various foreign countries where they served, stranded, unable to get back to Korea. While many of them eventually made it back to Korea, years later, the shame of the ordeal kept them from telling the public about what they endured. The world was ignorant of their suffering until 1991 when the first Halmoni came forward and talked publicly about her experiences. Many people, even Koreans, refused to believe, but her courage has allowed 220 more Halmoni to come forward and declare themselves as former sex slaves to the Japanese. Many others, though, remain in silence, either not wanting to relive memories of the past, or discouraged by families who feel ashamed to have this scar on their family's history.

These women, despite their age, continue to fight for official recognition and compensation from the Japanese government, which continues to claim that they were uninvolved in the brothel system. 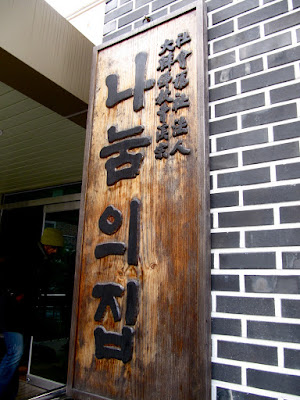 The House of Sharing is a place for the Halmoni to live together and heal the wounds of the past while educating the future generations of the suffering they survived. 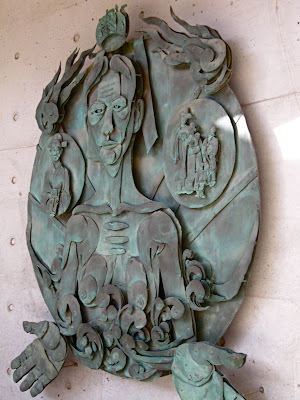 Before you enter the museum, you will pass two sculptures. This sculpture represents what the Halmoni dreamed of before they were conscripted into the brothel system. They dreamed of love, happiness and having families of their own. 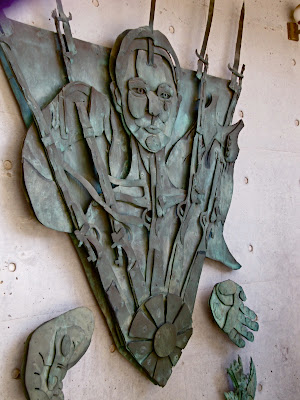 This represents their mind after becoming sexual slaves. Their dreams shattered, pierced with bayonets. 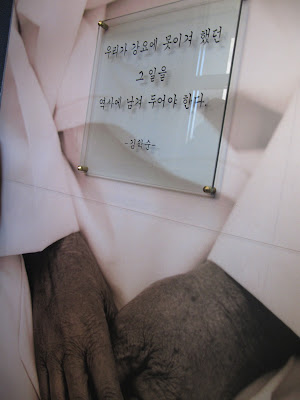 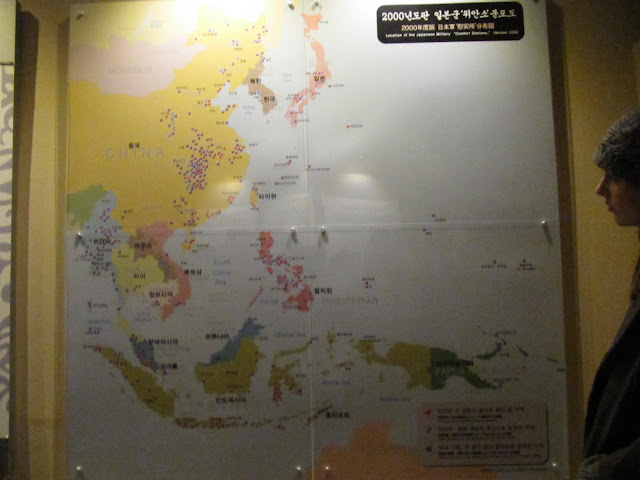 It's hard to see on this map, but if you can make out the tiny dots marked about the map, they represent the locations of all the known and suspected sex slave camps set up by the Japanese military throughout their empire in East Asia and Southeast Asia from 1932-1945 when WWII ended. 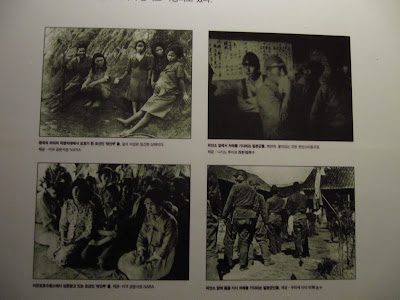 Actual photos of the "comfort women" and Japanese soldiers at the brothels. 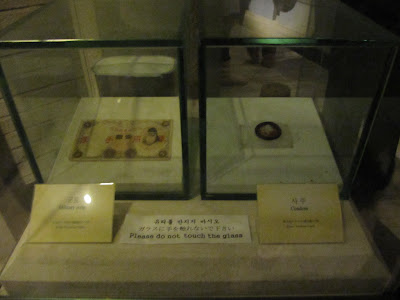 The Japanese soldiers paid for their stays with the "comfort women" with the Japanese military currency (left side) but the women never saw any of this money. Each woman was issued one condom which she needed to wash between clients. Some women saw up to 40 men per day. Those who complained about the conditions or tried to escape were beaten or killed to make an example for anyone else who had similar thoughts. 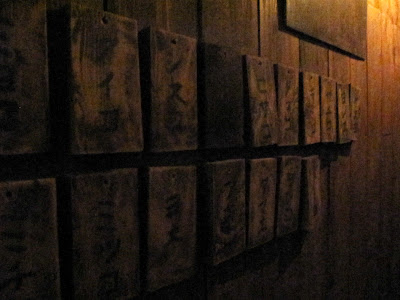 The women, who were 80-90% Korean, were given Japanese names, usually flower names, and each woman's name was placed on a wooden placard on the wall which is quite similar to menus in a Japanese restaurant. When a woman was unavailable for a day due to illness or other reasons, the placard was turned over, just as a sold out item would be in a restaurant. It really goes to show how the women weren't even thought of as humans. The reason why the actual number of women who were coerced into this trade is unknown, is that when more women were required they were ordered on military supply requests along with ammunition and other supplies. 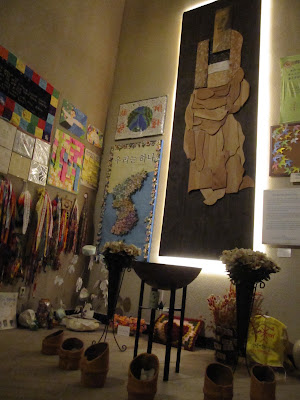 After you pass through the rooms of the museum explaining the history of the sexual slavery, you come to a room which shows the present. You can see photos of all the Halmoni and how they came back to Korea. You can see Japanese and Korean textbooks, neither of which touch upon the subject of the sexual slavery during the Japanese occupation. Above, you can see many gifts which have been bestowed upon the House of Sharing. Many have come from Japanese visitors who do not follow their government's line of thinking in that the Japanese government and military were not responsible for the brothel system. 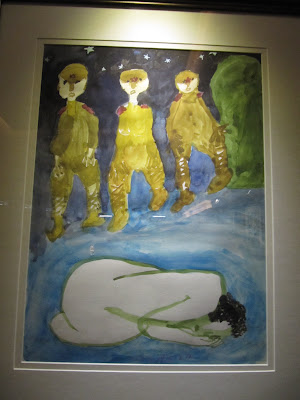 An art therapist has helped the Halmoni to come to terms with their suffering and express their emotions through art. Some of the paintings are on display in an upstairs room of the museum. 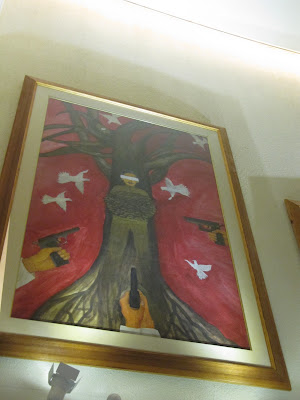 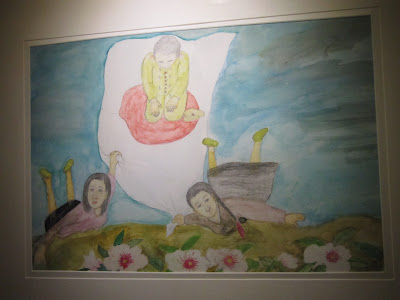 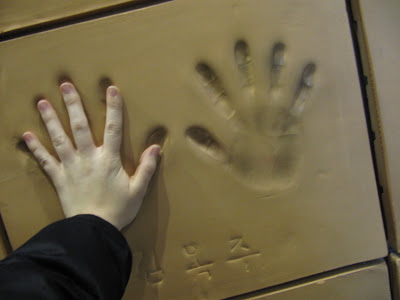 As you exit the museum, you can place your hands in the hand prints of the Halmoni. 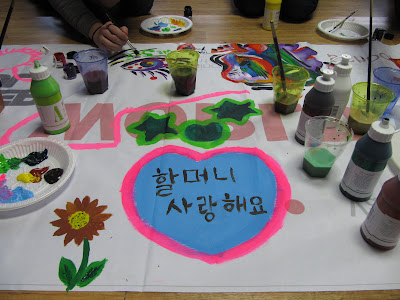 Finally, visitors may have a chance to meet some of the Halmoni that reside in the house. We decided to make a banner with the Halmoni. Actually, none of the Halmoni actually painted with us, but they seemed quite content to watch us. Some people talked to the Halmoni, but I'm much to shy for that. But, I had a nice time painting. Above you can see my creation :-) 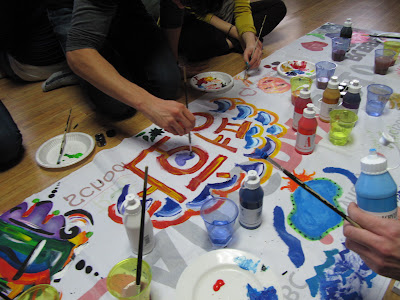 English tours are only offered about once a month by the International Outreach Team so you'll have to plan in advance if you want to come here. You can visit the English website or email the International Outreach Team (visits@houseofsharing.org) for more information. The next tour will be held on January 15th, 2011. You need to email to sign up, but you can also check out their facebook event.