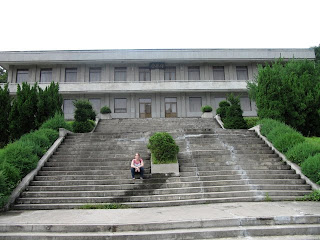 So I took a little trip to Panmujeom this weekend and got a nice picture of myself in front of the North Korean building known Panmungak. The North Koreans were really nice about it and even offered to take this picture for me... 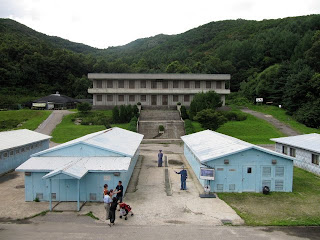 Ok, ok, I didn't go to the DMZ, I went to Namyangju Studios, a museum/ working studio for Korean films. I was inspired to go to this place when Foreigner Joy went a month ago. It is really close to the boyfriend's grandmother's house, so I really had no excuse not to go. 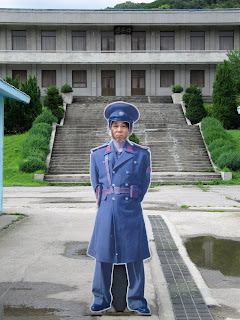 The JSA (Panmunjom) set was really cool. If it weren't for the cutouts of soldiers to take pictures with, it would have felt pretty real. I even felt the slightest knot in my stomach when I crossed the "military demarcation line" and went to explore the "North Korean" Side. 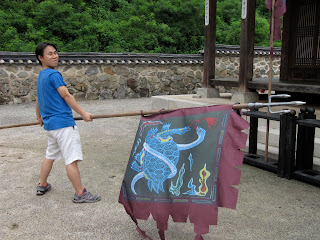 After the Panmunjeom set, we wandered around the three other outdoor sets. Some were more interesting than others, and the other three were all sets used in historical movies, therefore all a little reminiscent of going to any hanok or folk village. But, the cool part about coming here, though, was the fact that anything laying about is fair game to play with. You can go into any of the houses too, not just look from a distance. 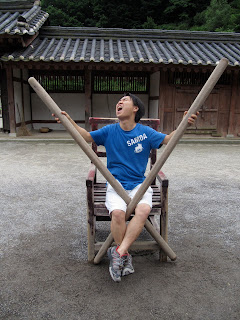 The boyfriend here is torturing himself with an ancient torture technique known as 주리(churi). Churi was used to force criminals into confession to their crimes. Basically, you just twist the legs until they snap. 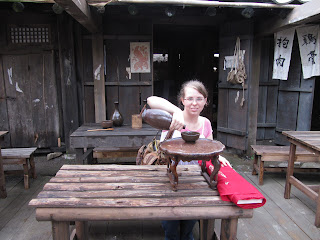 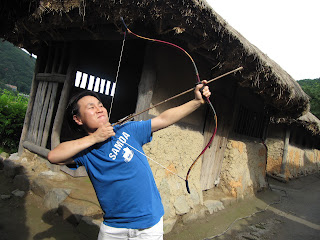 This bow and arrow actually worked. The boyfriend shot it into a wall, hoping it would bounce off. Of course, these are movie sets not made of sturdy materials. It went straight into the wall and got stuck there. But, shhh, don't tell anyone.. 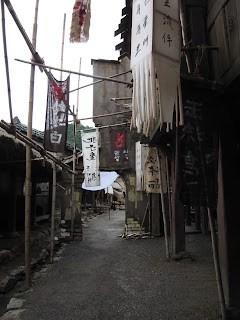 After the outdoor part, we decided to go to the indoor part for a bit and walk around. It was mildly interesting, though most of the signage was in Korean. I was feeling a bit sick from the heat too, so we didn't spend a long time here.

If you want to check this place out, it's possible by subway. If you take the Jungang Line to Ungilsan Station (운길산역), you can take a free shuttle bus to the studios. Here is the schedule I copied from their website.

Email ThisBlogThis!Share to TwitterShare to FacebookShare to Pinterest
Labels: Tourist Sites in Korea