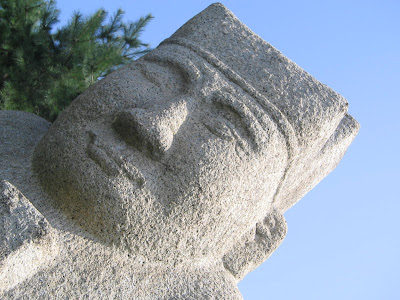 Well, I actually tried to get to this park last July, but was unsuccessful in finding the entrance into the park. This time around I actually followed the directions in the guide book rather than wondering and guessing myself. This park is the location for the tomb of King Seonjeong,  grandson of the most famous of the Korean kings during the Joseon dynasty, King Sejong. The tomb itself is pretty cool to check out. It is surrounded by stone warriors and several zodiac animals. 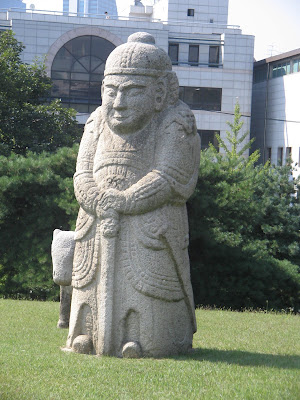 The tomb it self really only takes about 5 or 10 minutes to check out. The rest of our time there was spent exploring the park. It's probably the closest I've come to nature in Seoul. Lots of trees and nice walkways through the "woods". We really were enjoying the birds in the park. We saw several large beautiful woodpeckers quite close, though it was hard to get a picture of them because they blend in so well with the trees. 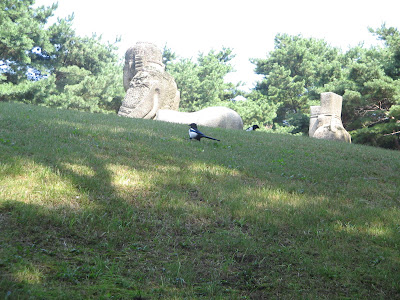 This photo is of a bird I see fairly often here. I have no idea what it is called, but it is quite beautiful... black and white with beautiful tail feathers.

This park is an interesting place to check out and escape from the constant bombardment of civilization that Seoul offers. Entrance to the park is 1000 won (which, sadly, this week is only worth about .81 cents, but that's a whole other rant completly). You can find this park by taking line 2 (green line) to Seolleung, and go out exit 8. Walk for a minute or two, and you'll find it on your right.

Email ThisBlogThis!Share to TwitterShare to FacebookShare to Pinterest
Labels: Tourist Sites in Seoul